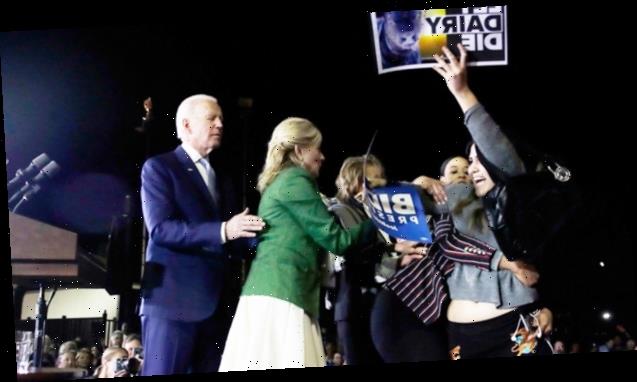 Protestors found out the hard way not to mess with Dr. Jill Biden when she stopped them from storming the stage during husband Joe Biden’s Super Tuesday victory speech. You need to see this footage.

Dr. Jill Biden will not be tolerating any malarky. The former Second Lady, 68, leapt to husband Joe Biden‘s defense when anti-dairy protestors rushed the stage during his Super Tuesday victory speech in Los Angeles, literally throwing her body in front of his. When the first protestor reached the stage, one of the former vice president’s bodyguards (he doesn’t have Secret Service protection) carried her away. That’s when a second woman, waving a sign and screaming “let dairy die!” jumped up. Jill used herself as a human shield, held the woman by the wrists and pushed her. This is where it became an incredible tag team effort — Joe’s senior advisor, Symone D. Sanders, rushed up onstage and grabbed the protestor around the waist, dragging her away. The Biden campaign’s traveling press secretary, Remi Yamamoto, and Joe’s sister, Valerie Biden, also joined them. You can see the incredible moment from two angles, below.

Symone let Twitter know that she was more than fine after the scary encounter, tweeting, “I broke a nail. #SuperTuesday”. Remi tweeted that “there’s no one I’d rather rush a stage with or have in my corner then [sic] my road sisterhood.” The internet rallied around the brave women who protected Joe from a potentially dangerous situation without any hesitation. “I want Jill Biden and Symone Sanders in charge of kicking Trump & his spawn out of the White House,” one person tweeted after seeing the brawl. “Jill Biden for Joe’s VP,”  wrote another. Others compared Jill, Symone, Valerie, and Remi to the Dora Milaje, the powerful female army from Black Panther, or the Amazonian warriors of Wonder Women.

The scary situation only briefly put Joe’s speech on hold. It ended with Jill patting her husband on the arm, saying “you’re okay, you’re okay,” as supporters chanted “let’s go, Joe!” in the background. Anti-dairy protestors have been protesting candidates’ events throughout the entire presidential race.