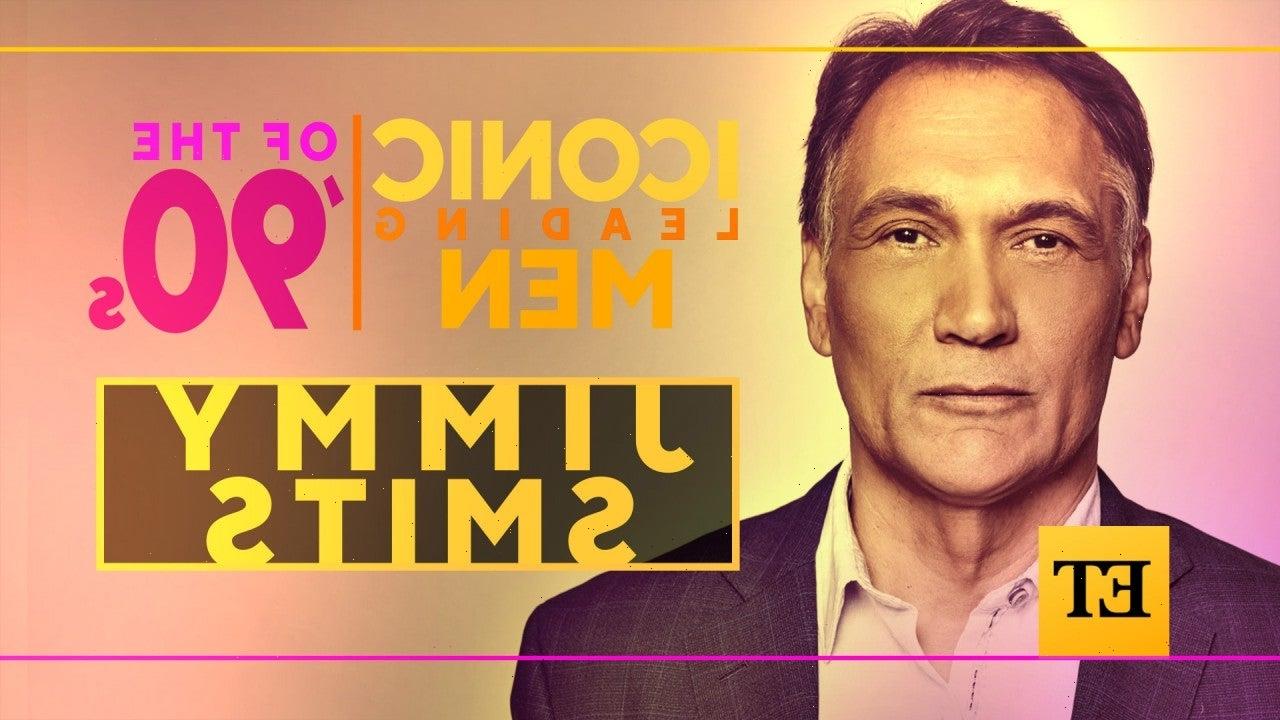 Procedural dramas are among the most-viewed series in network television. And if there was one man who captured the hearts of a diverse group of viewers over the last few decades, it’s Jimmy Smits.

The Emmy Award-winning actor made waves and broke barriers for his stoic and evolving roles as Victor Sifuentes on the legal drama L.A. Law, Detective Bobby Simone on the police drama NYPD Blue and President Matt Santos on The West Wing. That’s why it’s so fitting that Smits is one of ET’s Iconic Leading Men of ’90s TV alongside Mark Curry, Patrick Duffy, Charles Shaughnessy and Grant Show.

“When we talk about representation now, it just warms my heart. Being able to see it on screen, makes you believe that you can do it. There wasn’t that many examples for me to see,” Smits, 65, tells ET’s Nischelle Turner, citing Puerto Rican actor Raul Julia and James Earl Jones as actors he looked up to when starting his career. “Just because of what they were able to achieve, and not letting whether you have an accent or you have a stutter hold you back. That your training is your springboard, that if you come with your toolbox, and that you’re ready [you can succeed].”

For Smits, his Puerto Rican heritage and growing up in Brooklyn shaped some of his most dynamic on-screen characters — as well as gave him a little bit of swag.

“Characters know love or loss or pain or feelings of extreme emotionality, and you just apply whatever you have in your banks and what you don’t have you make-believe,” Smits explains. “But I do think that the Latin flavor has always kind of helped give a little something, something more.”

Smits got his foot in the door with the Steven Bochco and Terry Louise Fisher-created drama L.A. Law. Beginning in 1986, Smits embodied Attorney Victor Sifuentes for five seasons, touching on hot-button issues that reflected the cultural and social ideologies of the time. But, he almost didn’t get the role. 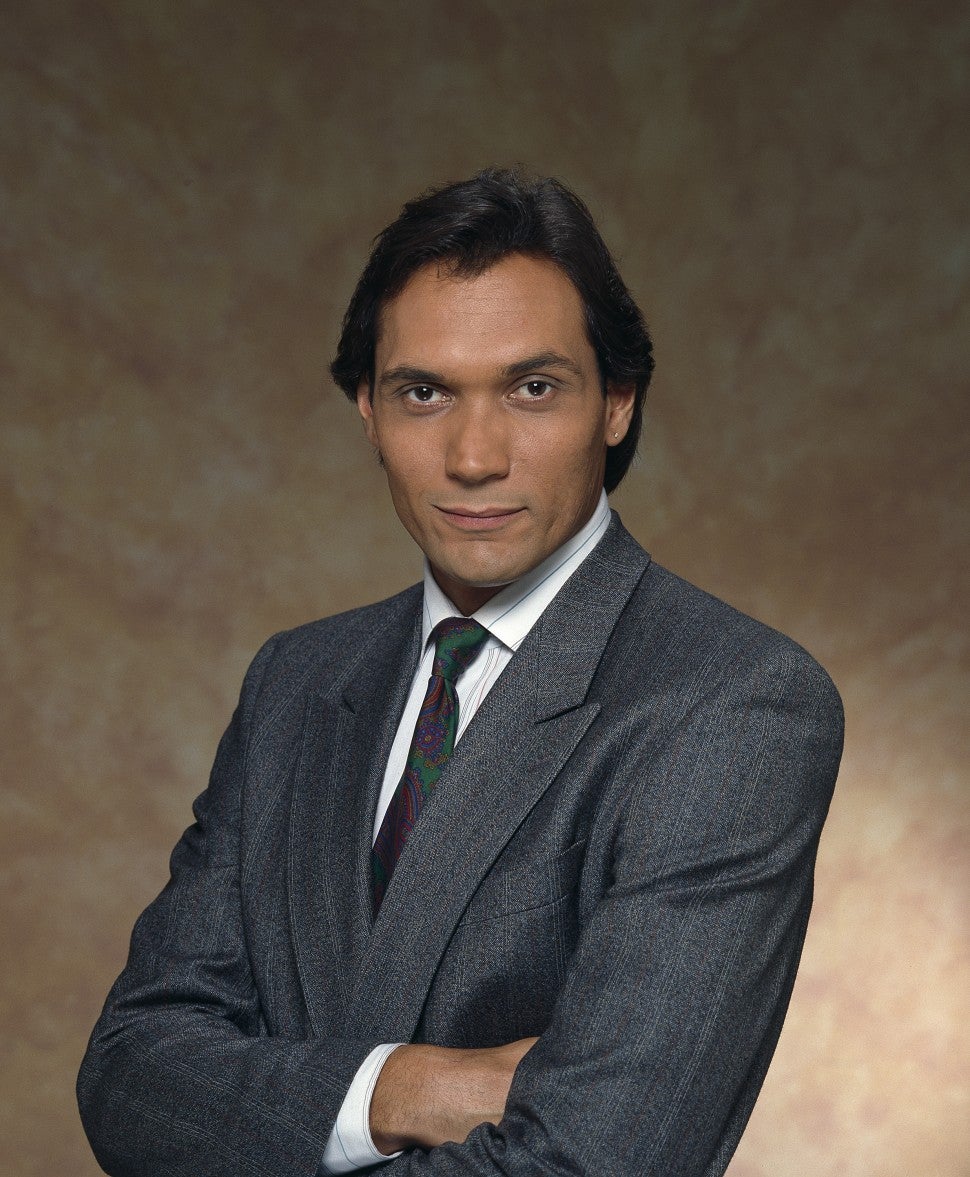 He recalls auditioning in New York for the part, calling it a “last-minute thing” for people who were involved at the network and not the main show. “It didn’t go well. I’m really methodical about stuff and I’ve never really done well off the fly,” he admits. “So it didn’t go well and I was depressed.”

It wasn’t until a friend suggested they fly to Los Angeles and find a way to get another audition. “It was the whole thing about persevering and really believing in, ‘I’ve got something to bring to the table here,'” Smits expresses. “And I did get another chance to meet Steven Bochco and people that were involved. I was very prepared and was able to verbalize what I could bring, what I felt was there and what could be there, and it went good.”

As for what Smits could bring to the table with Sifuentes, he felt the character “had much more of a bounce than what I had, so that helped.” “And first and foremost, I wanted to make sure that the character, in terms of being a lawyer, was spot on,” he explains about the role which earned him six Emmy nominations and his first win in 1990. “And they let me do that in so many different ways. The writers’ room did this story where there would be semi-comedic scenes and I never thought those kinds of things would happen with this particular character. It was very kind of fulfilling on so many levels.” 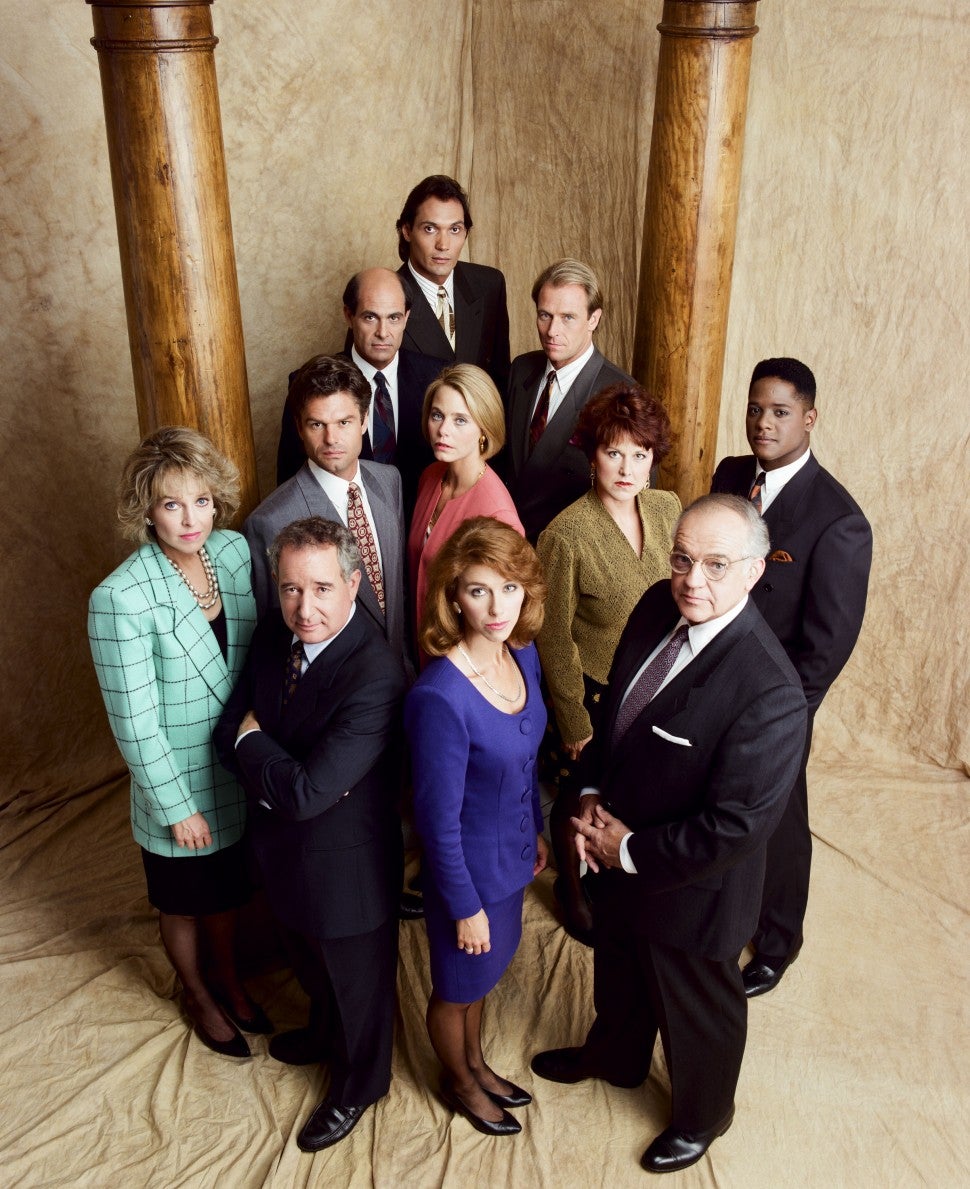 The ensemble cast, featuring Richard Dysart, Alan Rachins, Corbin Bernsen, Jill Eikenberry, Harry Hamlin, Susan Dey, Michelle Greene and Blair Underwood, among many others, became quite a hit with critics and audiences. Smits credits it to their “wonderful” vibe on and off the screen, and knowing that they would each have their moment to shine.

“Everybody got their little one week. You knew that you were going to just be holding the door for Blair coming through, and then the next week you would have a big case,” he explains. The dynamic worked well, with the show receiving 15 Emmy Awards throughout its run.

But just as Smits was starting to get settled, he decided to make a change and leave the show in 1991. L.A. Law would go on to run for eight seasons, ending in 1994. “I have commitment phobia. You could track that with the career moves that I make,” he jokes, adding that if there ever was a reunion, Sifuentes would hopefully be “a judge now or got into politics.”

And from one procedural to the next, he then landed one of his most acclaimed roles — Detective Bobby Simone. This time, Smits joined NYPD Blue during its second season in 1994. The actor knew the ABC show was something special, pushing envelopes and capturing the zeitgeist of the grittiness of the profession.

“I lucked out. That was a beautiful blessing, and a really a fine cast. To have a partner to be with on a daily basis in Dennis Franz was pretty special,” he recalls. “Research-wise, I was able to hang with all these cops and internalize what they go through. And then having to be partnered up with another character who was so polar opposite in terms of their politics… It just was such great fodder for good stories.” 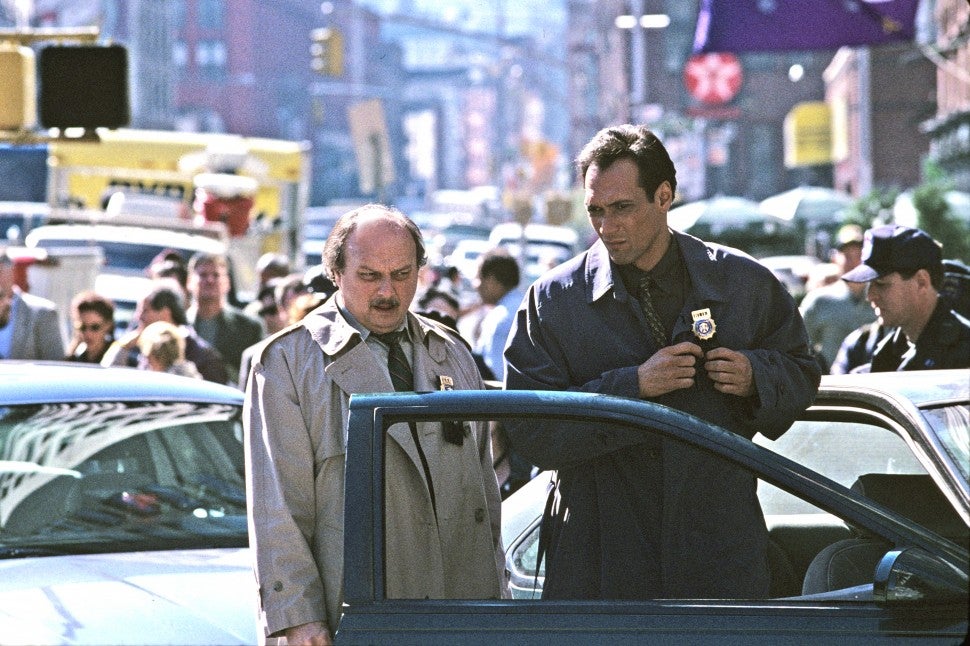 The difference this time in terms of character personalities was that Detective Simone had a “somberness to him that Victor didn’t have and that was the steady, silent engine that fueled him.” New challenges arose for Smits when becoming the detective, including separating his own personal thoughts and history with that of what the scripts provided him.

“For me, coming from the background that I came from and the neighborhood that I came from was — I’m talking about that now in 2020, when we’re in the middle of witnessing transgressions by people who are supposed to be protecting us — to get into the mindset and really understanding, you don’t know what is behind the door, or you don’t know what you’re going to run into when you go into a car and how that affects you. To get into that mindset, it was tough.”

To help the actors, the team had detectives and police officers around them sharing stories to make it as authentic and relatable as possible, but for Smits, who grew up in a section of Brooklyn where the 75th precinct is, where “there was a lot of turmoil between cops and people on the street, I had to find what that balance was about.”

Smits would go on to depart the series after its sixth season in 1998, leaving with five Emmy nominations, one Golden Globe and an ALMA Award win. Santos’ demise, he says, “was handled really beautifully” and helped him navigate the emotional tones of “what loss or the potential loss, what saying goodbye, is all about.”

Becoming the leading man took a new turn for Smits when he joined the cast of Aaron Sorkin’s The West Wing. The creator had left by the time the actor made his appearance in 2004 during season 6 as Congressman Matt Santos. Smits would once again break the mold of what a Latinx character looked like on screen, with his character seen running for president and winning the election. The moment was a big step forward in Latinx representation and roles for people of color.

“John Wells, who was one of the creators of the show, wanted to explore this path of a minority candidate and what going into a candidacy would be all about. It was just [unbelievable],” he says, adding that he was honored to have been playing a role of a Latino president. Smits was also aware of the impact his character’s storyline had for many viewers and underrepresented groups.

“It sat with me because I knew I was doing that and knew we were going out…I felt like there was something else that was going on in terms of what he could potentially represent,” he reminisces, explaining that there was a “crackle,” spark-like feeling. 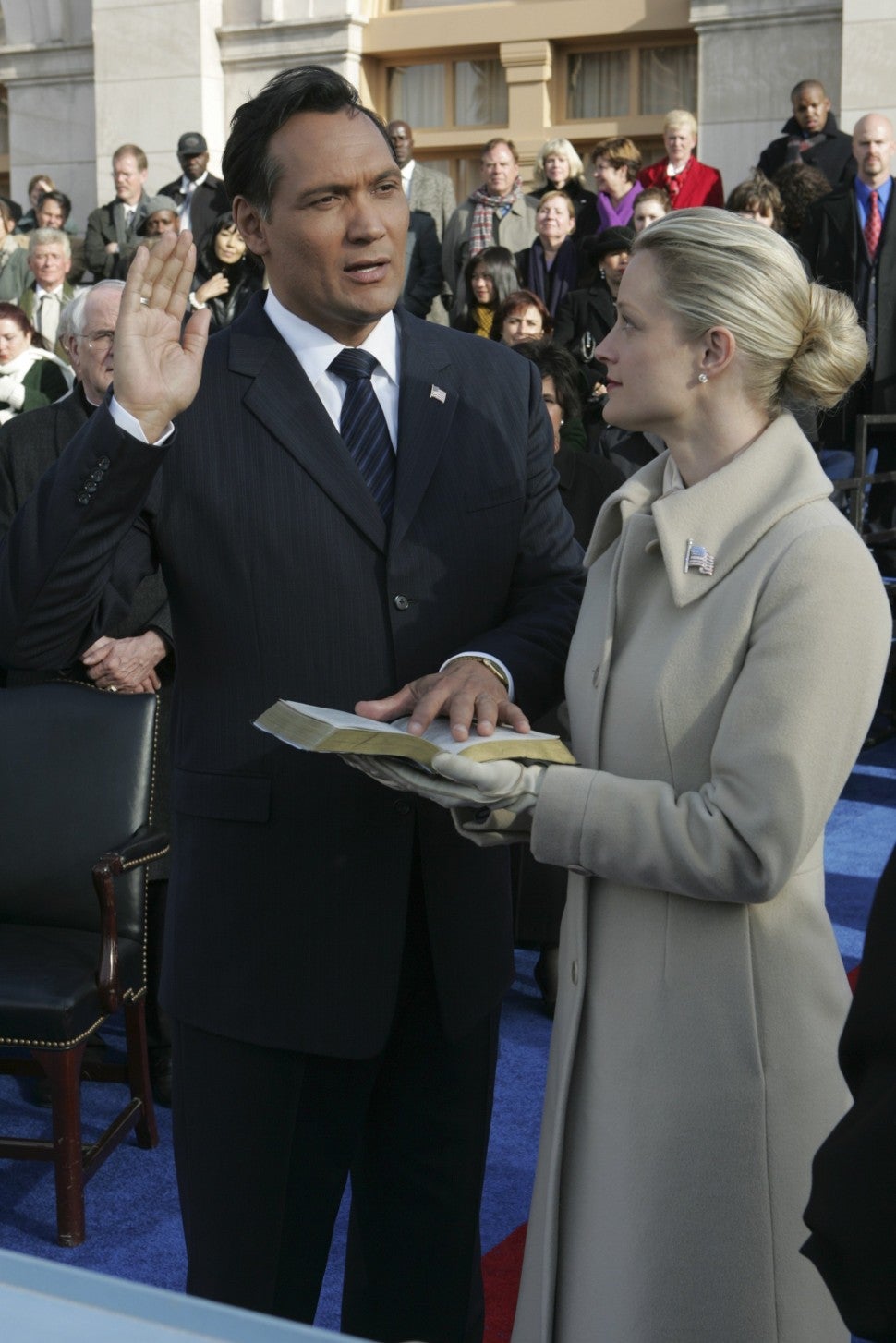 Smits would go on to enchant audiences with roles on Outlaw, Dexter, Sons of Anarchy, The Get Down, 24: Legacy,Bluff City Law and How to Get Away With Murder. Of course, fans also know his mega-role of Bail Organa in the Star Wars franchise (another major win for Latinx actors).

The actor, meanwhile, is going back to his theater roots in the movie adaptation of Lin-Manuel Miranda’s musical In the Heights, singing and getting his groove on. Originally postponed amid the pandemic, it will drop in theaters and HBO Max on June 11. A fan of Miranda and co-writer Quiara Alegría Hudes’ work, Smits teases that the original story was updated to fit with the current times. “And the fact that they have Jon Chu directing, it was really good stuff!” he says.

Smits portrays hard-working Kevin Rosario, who owns and runs a taxi dispatch. He is an overprotective but loving father to Nina, portrayed by singer Leslie Grace, who is the first in her family to go to college. The beautiful — and very much relatable — father-daughter story plays out when Nina returns home from Stanford after feeling like she doesn’t belong.

“The whole thing [is] about the parents wanting the best for their child,” he explains, before marveling over Grace’s extraordinary acting abilities. “She’s an accomplished singer and totally on point in terms of the vocal stuff, but she was so open and emotionally available. That whole father-daughter relationship really manifested itself and I’m happy with it.”

He also praises the new generation of actors taking over, including Grace, Corey Hawkins, Melissa Barrera and Anthony Ramos, saying, “Those four characters, the youngins in the piece, are special.” The film as a whole celebrates Latinx cultures, and the actors themselves knew the importance of bringing the story to the big screen.

“‘We’re doing this for the culture!’ That’s what Anthony used to say, ‘We’re doing it for the culture. Yeah!'” Smits recalls with a smile. “But Jon has brought something [amazing]…I got goosebumps and I cried several times while I was watching it.”

Reflecting on his outstanding and groundbreaking trajectory, and seeing the new generation make their own impact on the entertainment industry, Smits couldn’t be prouder. As for what he would tell his younger self about life in Hollywood?

“Don’t lose what you came with. You know that’s special. You have to protect that. And then realize that this, all of this, is kinda part of the machine and you have to be able to embrace it,” he shares. “But at the same time, preserve what got you here in the first place. There’s a couple times I forgot about that. So that’s why I have to continually keep reminding myself of it.”

“I live by that,” he continues. “And I think that in whatever endeavor you try to pursue, to just do it with love, try to keep that love going about it.”