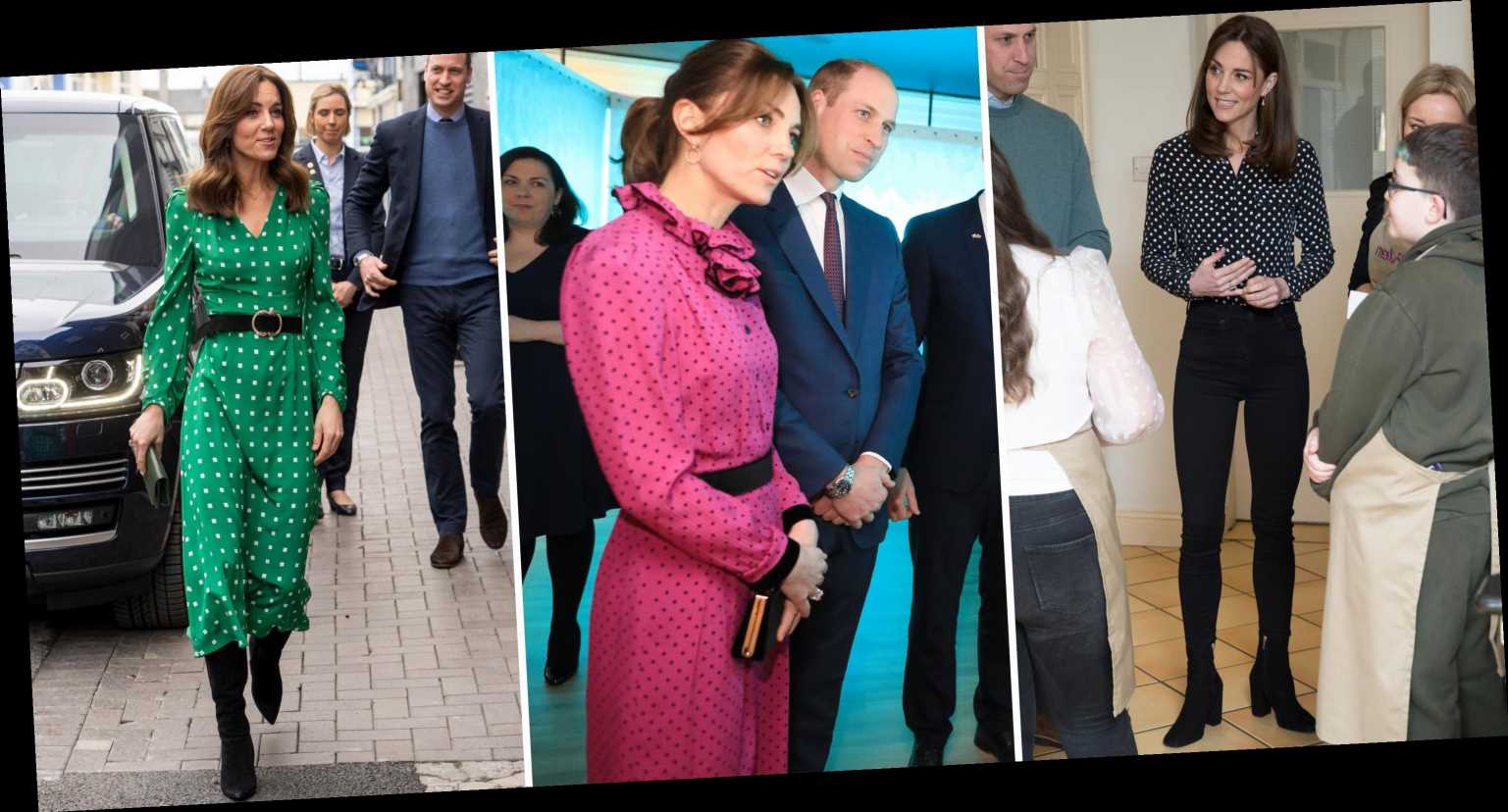 How does the Duchess of Cambridge love polka dots? Let us count the ways.

For her and Prince William’s tour of Ireland, Kate has frequented the playful print more than usual over the past two days alone, and the result is a collection of outfits that ranges from casual chic to evening appropriate.

First up was a black-and-white silk blouse by Equipment, which she wore with skinny jeans, ankle boots, and a longtime go-to cream-colored coat by Reiss. The relatively laid-back ensemble was fitting for her and William’s visit to Savannah House, a residence facility hosted by the organization Extern, where she took part in activities like playing ping-pong and preparing soup.

She previously wore the spotted top last fall during a surprise appearance at the Evelina London Children’s Hospital. 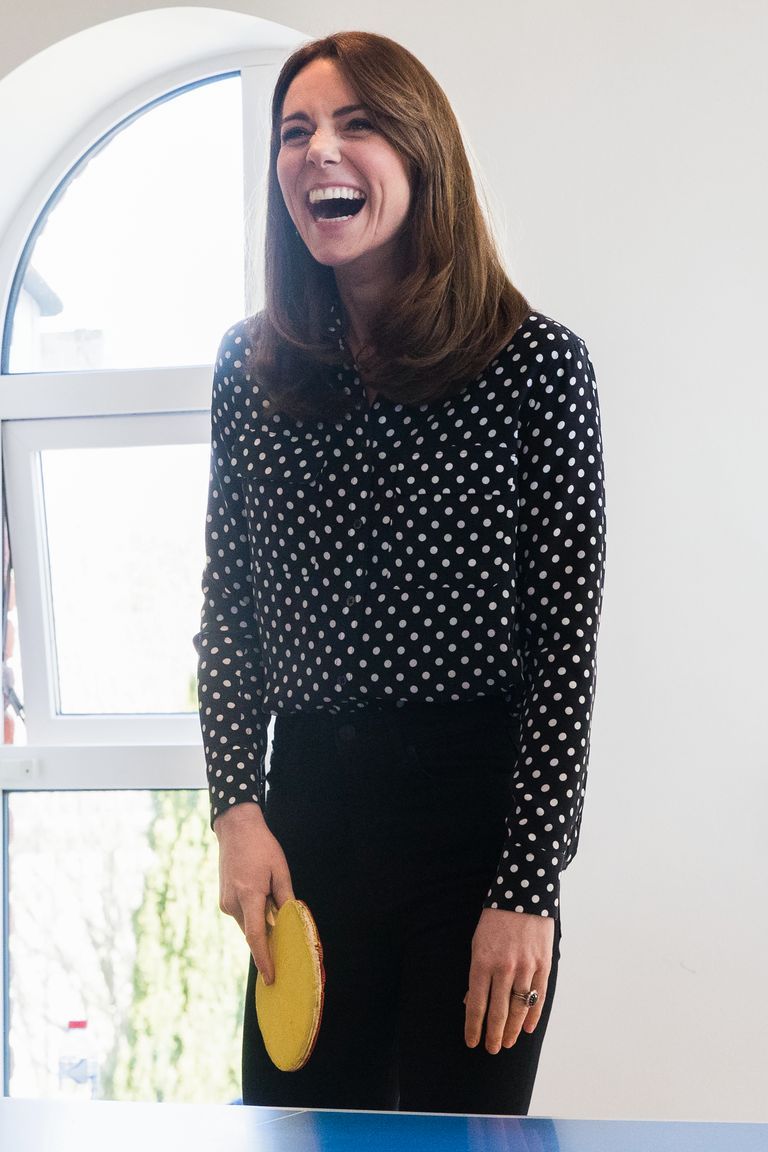 Later that evening, the duchess put a more formal spin on the pattern with a vintage Oscar de la Renta frock. The magenta midi dress featured a ruffled neckline, button details, and a belt at the waistline—a prim ensemble fit for a future queen, and fit for a nighttime reception hosted by Irish Tánaiste Simon Coveney at the Museum of Literature Ireland. 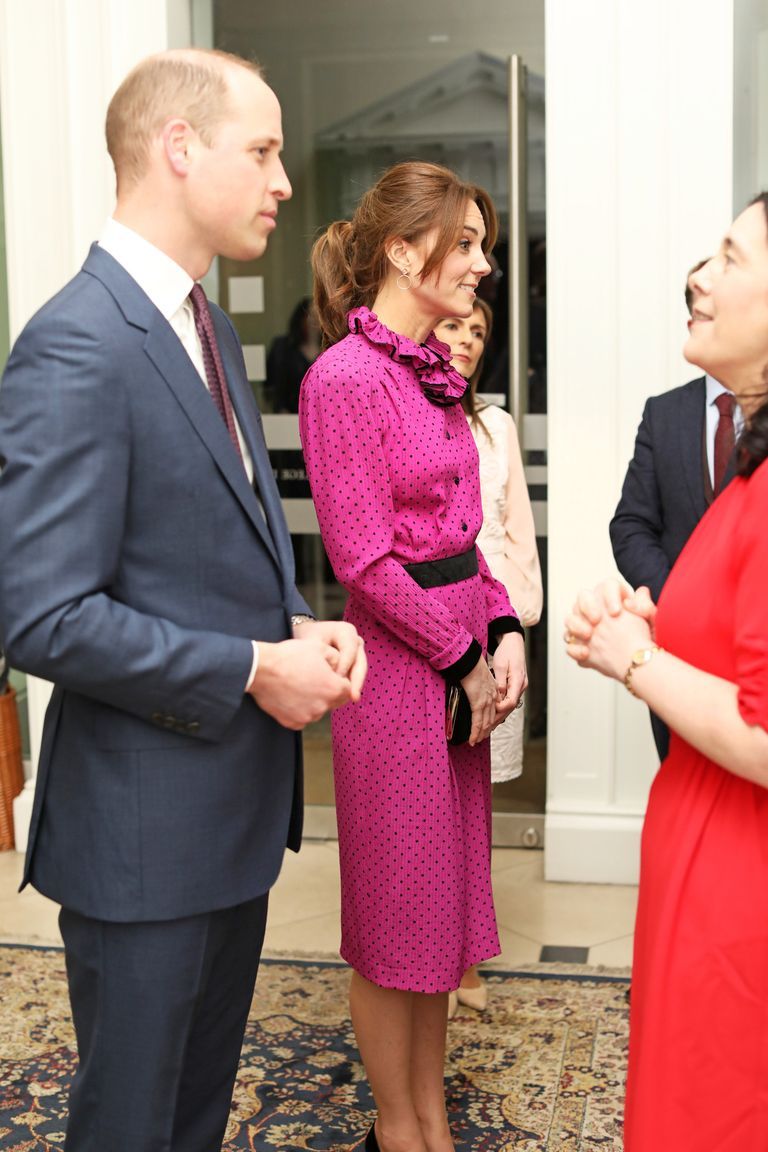 To complete her trio of dotted looks, the duchess wore a green dress by Suzannah this morning for her final day in Ireland. The print actually is a series of small squares instead of circles, but it gives off the same fun effect. Kate accessorized with an olive-green clutch, suede boots, and a belt. 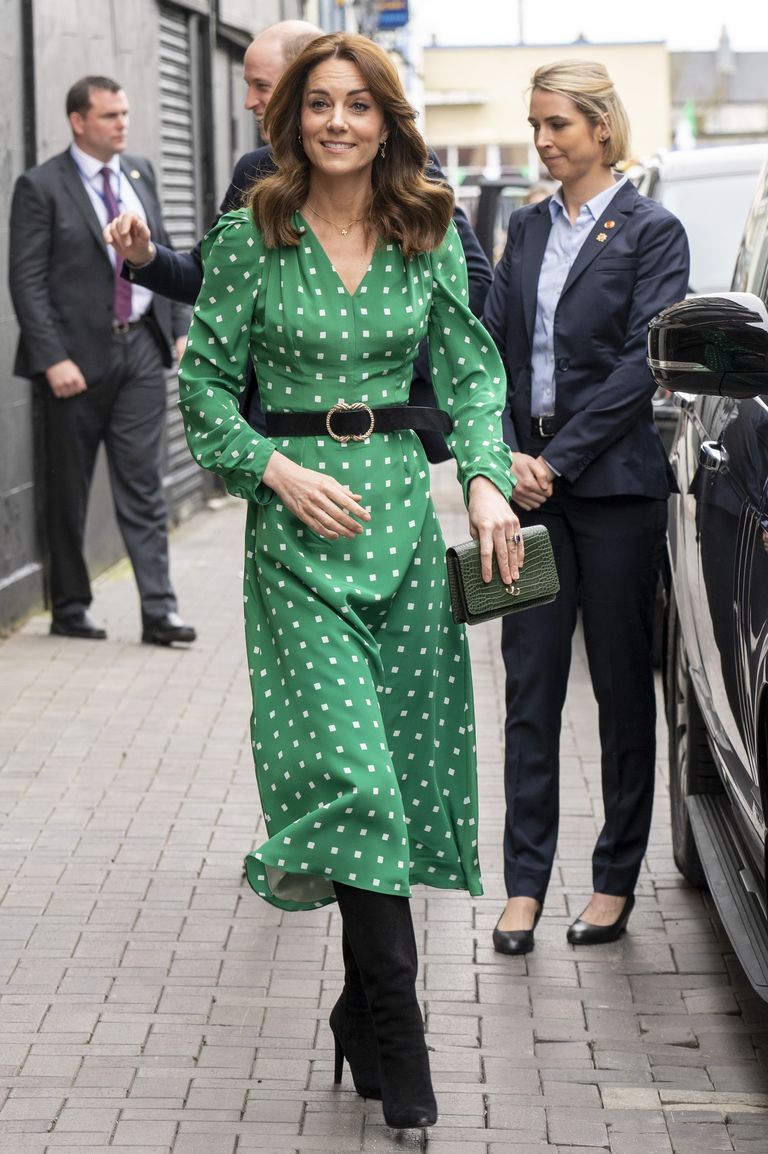 Die-hard fans of the duchess likely know that polka dots have been a staple in Kate’s wardrobe long before her tour of Ireland. (Granted, the ubiquitous print is a staple in anyone’s wardrobe at this point.) Some of her recent hits included a navy Alessandra Rich dress that she wore to a D-Day memorial exhibition and in a royal family portrait for Prince Charles’s 70th birthday. She even twinned with celebrities like Sarah Jessica Parker, Christie Brinkley, and Abigail Spencer, who attended the Sussex royal wedding.

Then there’s also a forest-green L.K.Bennett number with a pussy bow neckline that she wore to the Evelina London Children’s Hospital in December 2018. 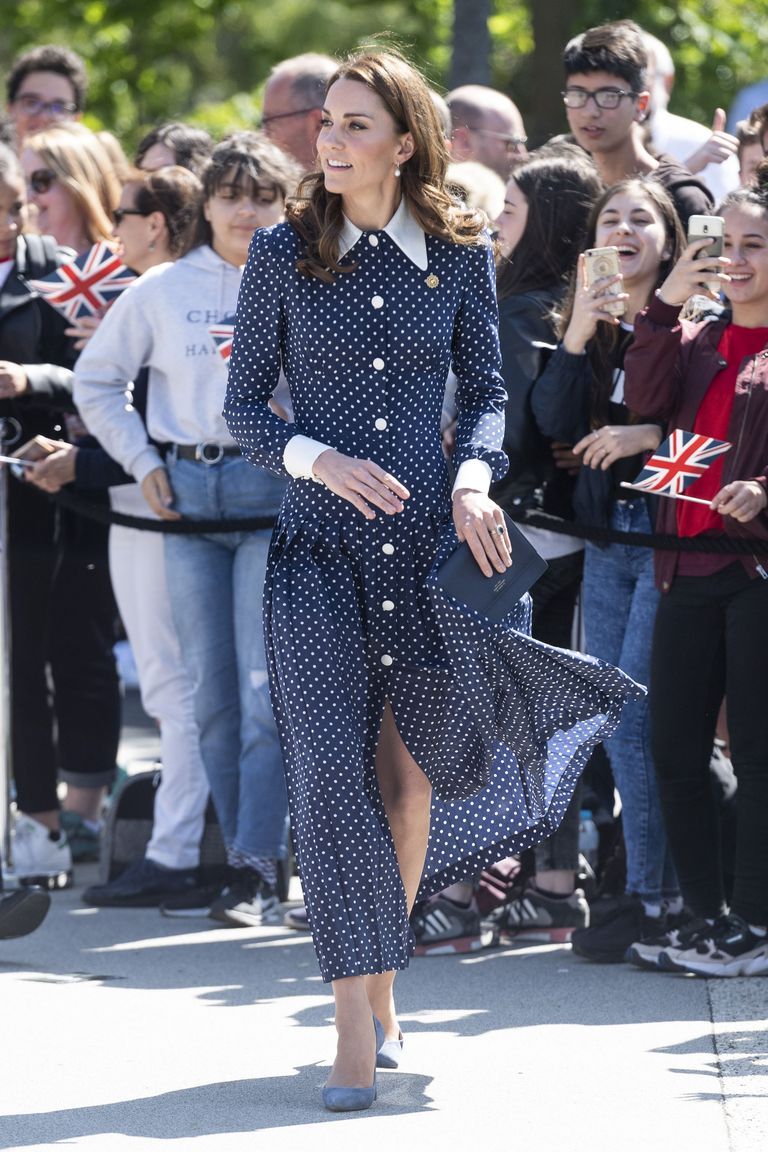 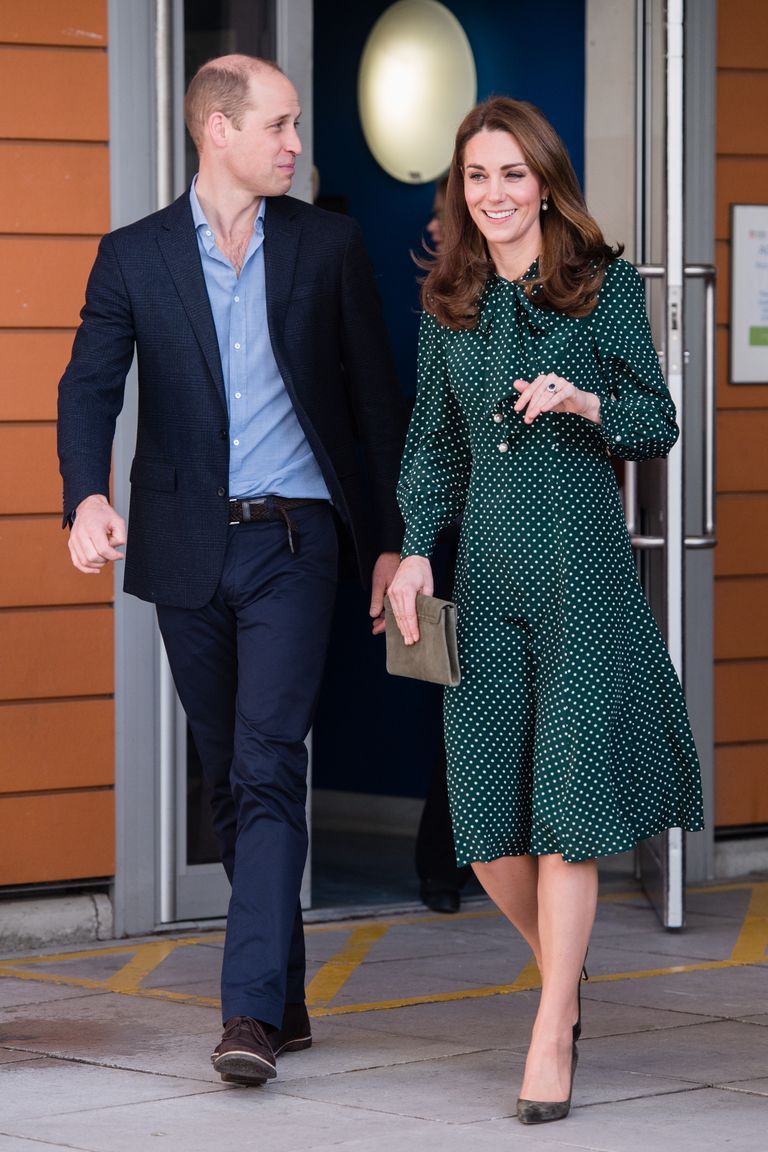 And though the recent spots she’s worn have been small and condensed, Kate has worn more abstract versions of the print earlier in her royal career. Take her Jenny Packham look at Wimbledon in 2018 or her blue Altuzarra number for her Stewards Academy visit in 2016. 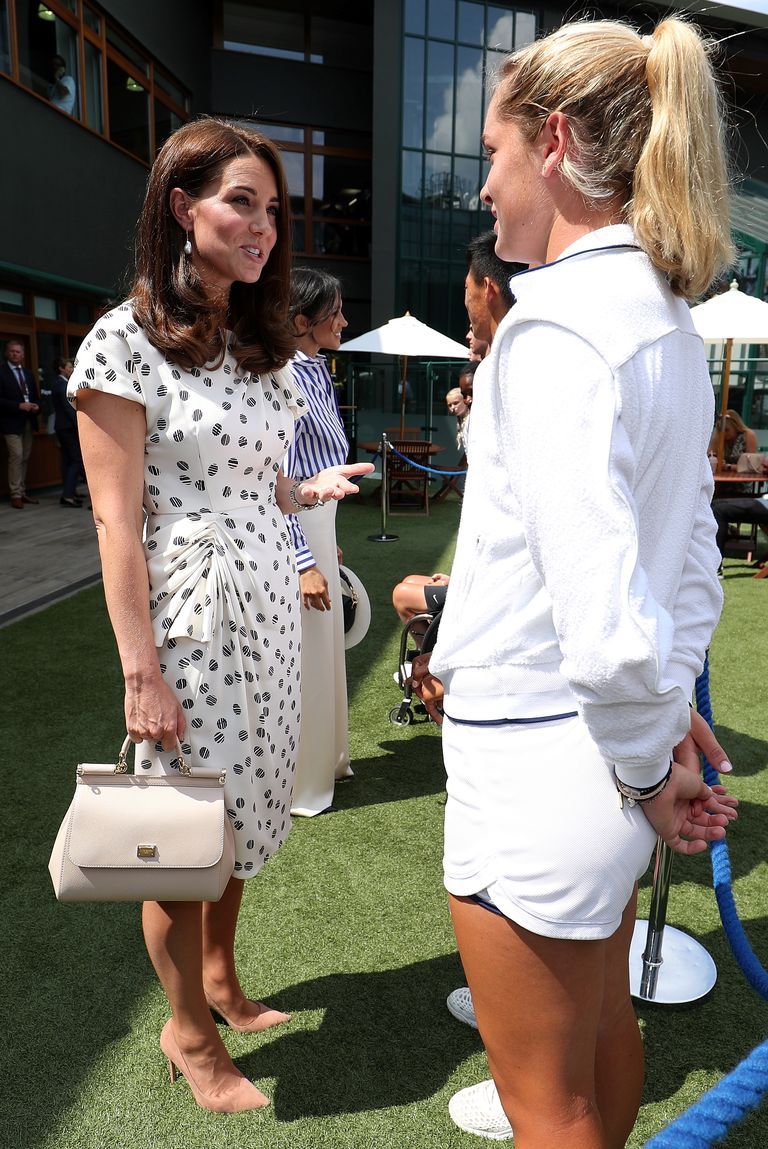 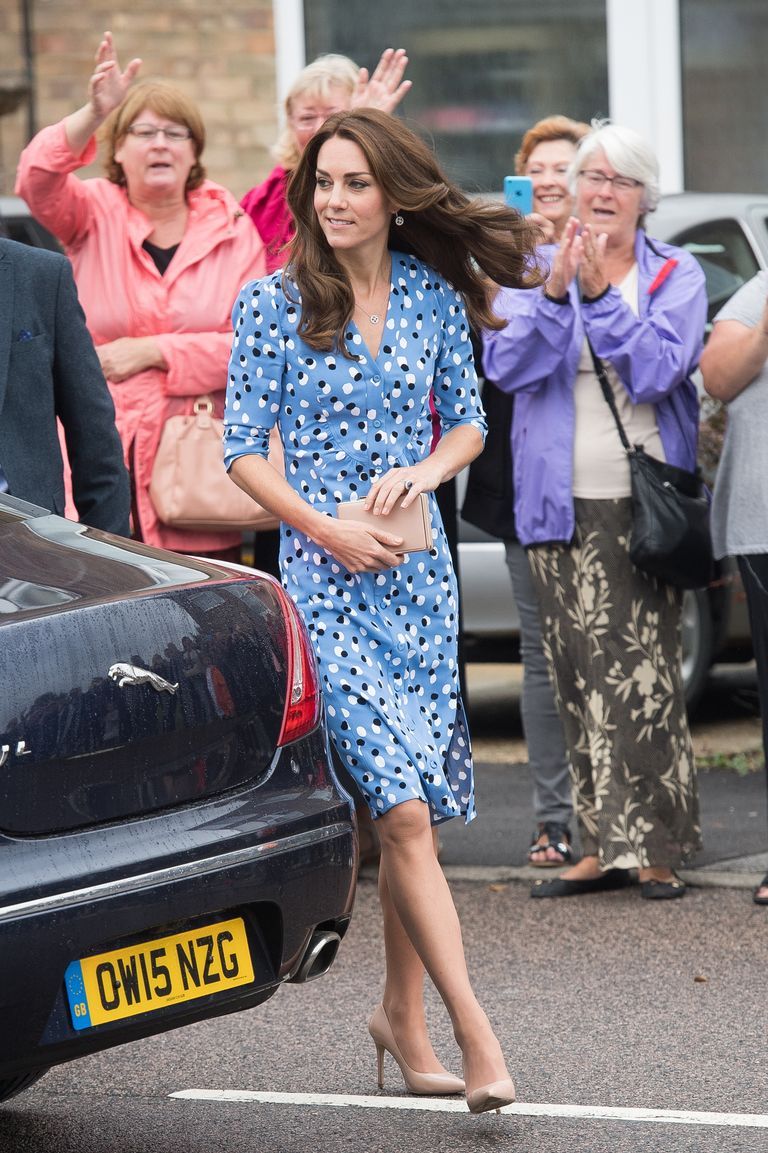 One of her most famous dotted dresses? The baby-blue Jenny Packham piece she wore on the hospital steps after giving birth to eldest son Prince George, third in line for the throne. Her late mother-in-law, Princess Diana, another royal style icon, wore a similar look while presenting a newborn Prince William to the world. She, like Kate, was a big polka-dot advocate too. 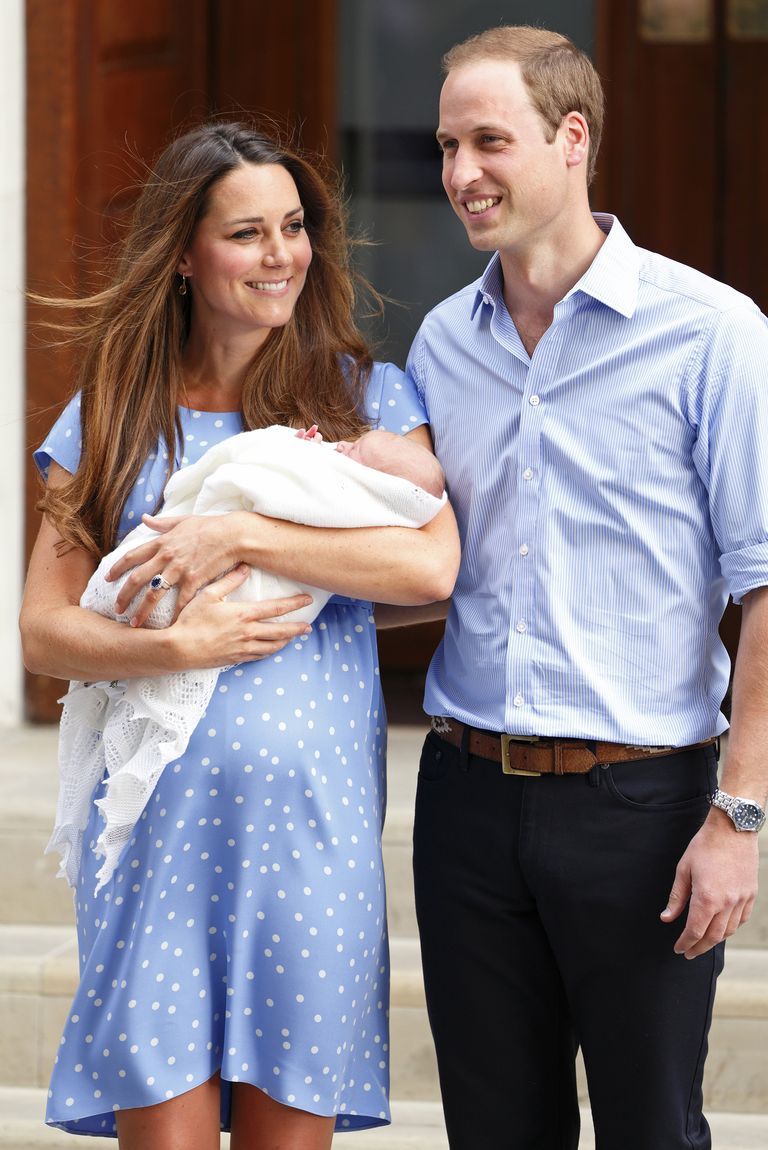 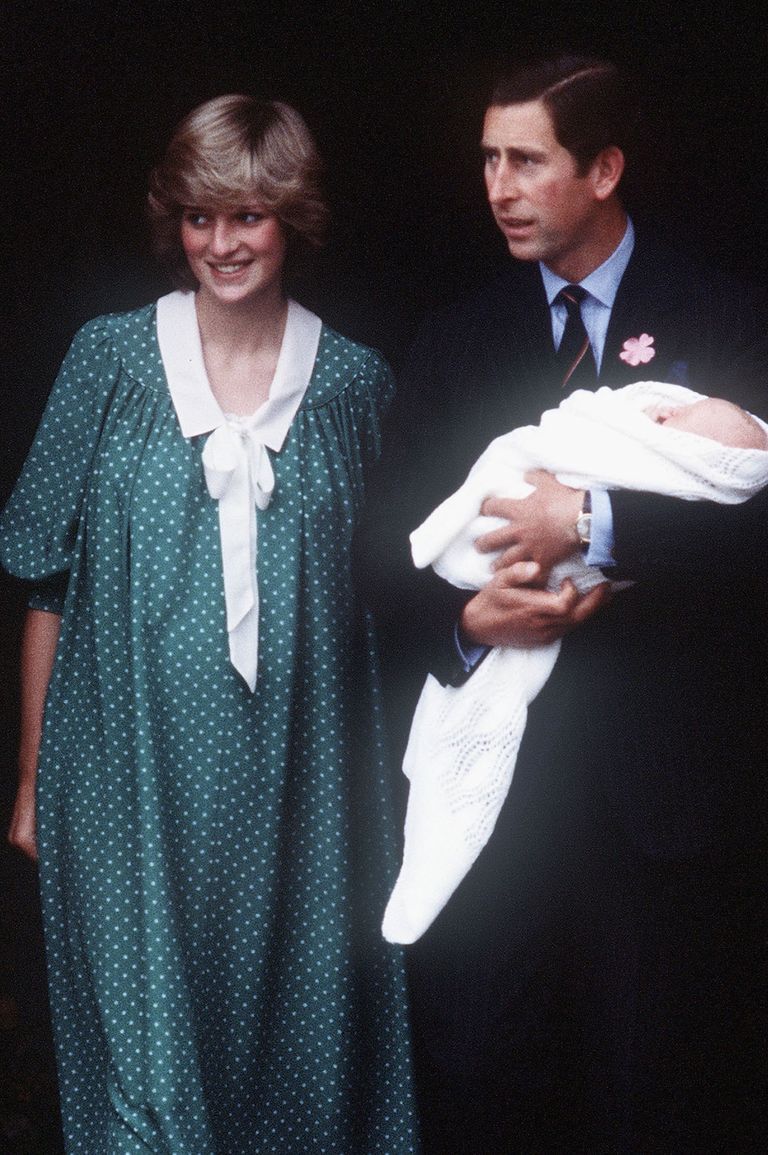