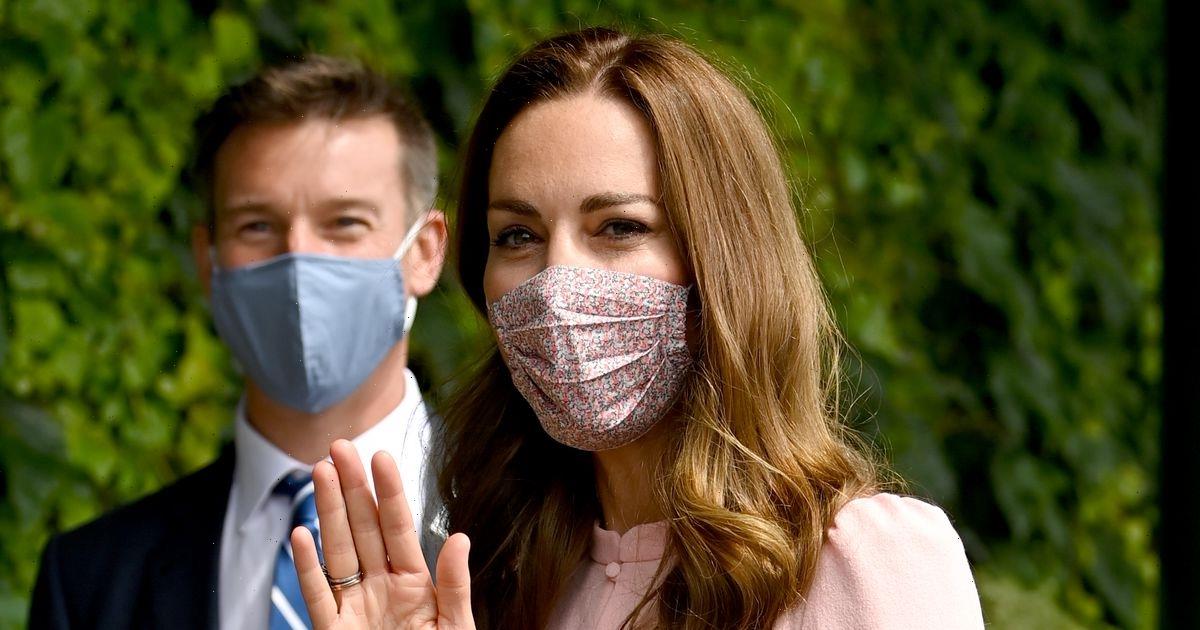 Kate Middleton looked gorgeous in pink as she arrived at the south London tennis venue with her dad, Michael Middleton, to enjoy the men’s Wimbledon final between Novak Djokoic take on Matteo Berrettini.

The Duchess wore a pale pink dress buttoned from the waist up and had short sleeves. The dress had a matching belt and Kate wore a floral face mask and had her long brunette hair down flowing over her shoulders in a bouncy blow dry.

The royal was seen wearing sunglasses as she cheered on players at the match.

She attended the men’s final at Wimbledon with her dad, Michael, as her husband, Prince William, has another pressing sporting engagement today as he is set to be cheering on England’s football team at Wembley tonight as they take on Italy in the Euro 2020 final.

She was pictured enjoying the events of the day smiling and clapping with the crowds during the game.

Kate, 39, is a keen tennis fan and has made regular appearances at Wimbledon since marrying Prince William in 2011. She is also patron of the All England Lawn Tennis Club.

The Duchess returned to her royal engagements yesterday as she attended the Wimbledon’s ladies’ final and presented trophies to the winner of the ladies’ singles, Ashleigh Barty and runner up Czech finalist Karolina Pliskova.

It was her first public appearance following a period of self-isolation as she was alerted by the NHS app while watching tennis at Wimbledon last Friday.

She received the message from the app informing her she had come into contact with a Covid-infected person, having spent most of the day at the tennis tournament.

Isolation periods last for 10 days after coming into contact with a Covid positive person – not from the date of notification.

She got the message just after taking her seat ready to watch British tennis player Dan Evans take to the court but was forced to leave and miss the match to head home and isolate.

Kate spent seven days isolating but was able to return to her public engagements yesterday to watch the ladies’ Wimbledon final.

The quarantine period has prevented the Duchess from her other royal engagements including attending events like the NHS’ 73rd birthday with William at St Pauls Cathedral last week.

It is understood that the royal has now received her second vaccination jab, with it being just over five weeks since pictures were released on her getting the first vaccine at the Science Museum in London.

To keep up to date with all Royal news, sign up to our daily OK! newsletter.