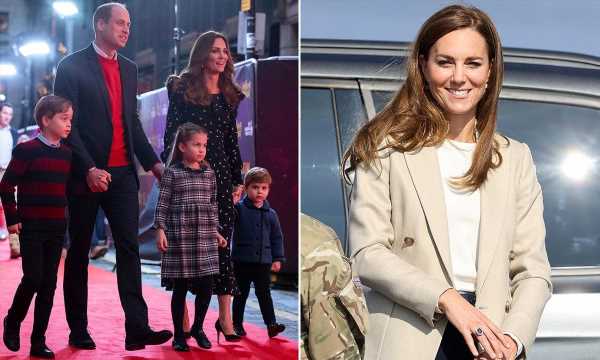 The Duchess of Cambridge returned to royal duties on Wednesday, hearing from personnel at RAF Brize Norton in Oxfordshire, who helped to evacuate thousands of people from Afghanistan in recent weeks.

Kate often shares anecdotes about her children, Prince George, Princess Charlotte and Prince Louis, and it seems the young royals have a shared interest with their father, Prince William.

After the Duchess toured a RAF C17 Globemaster plane, Lordmaster Sergeant Mark Curtis told PEOPLE magazine: “She did mention that her children are very interested in aircraft.”

And that’s no surprise given the Duke’s previous role as a RAF search and rescue pilot for East Anglian Air Ambulance between 2015 and 2017 when George and Charlotte were younger.

George, now eight, has previously demonstrated his love of aircraft, having attended the Royal International Air Tattoo at RAF Fairford in 2016 when he was just two.

The future King also looked thrilled to be given a tour of a helicopter in Hamburg during the Cambridges’ tour of Germany and Poland in 2017.

MORE: Prince George to learn impressive new skill as he returns to school

Prince George was thrilled to tour a helicopter in 2017

In 2016, mum Kate also revealed during an engagement to mark the 75th anniversary of the Air Training Corps that George was “obsessed with planes and wants to become an air cadet”.

George and Charlotte returned to their classrooms at Thomas’s Battersea in south-west London earlier this month, while Louis attends Willcocks Nursery School in Kensington.

William and Kate enjoyed a family staycation on the Isles of Scilly over the summer and also visited the Queen at Balmoral in Scotland.

Make sure you never miss a ROYAL story! Sign up to our newsletter to get all of our celebrity, royal and lifestyle news delivered directly to your inbox.