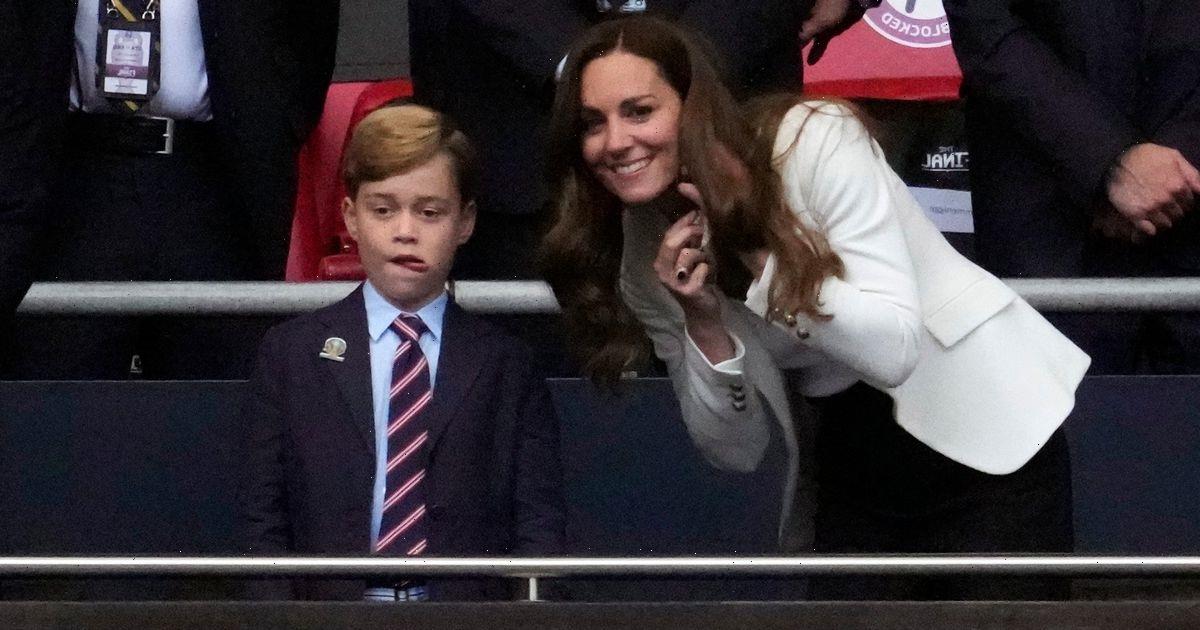 Kate Middleton has been seen sharing a sweet moment with her son Prince George after he was left heartbroken by England's defeat against Italy in the Euro 2020 final.

In the clip, Kate looked stunning in a white blazer and dark trousers as she put a protective arm around the seven year old, who appeared disappointed after the tense game.

The Duchess of Cambridge then leaned over her son to speak to husband Prince William, 39, who placed an affectionate hand on her back before the pair attempted to comfort George, who donned a suit and tie for the event.

Kate then turned around to pick up her red handbag while William put his hands on his son's shoulders before they made their way out of the stands of Wembley.

The footage was shared on social media platform Instagram by Daniel Ingram, who wrote in the caption: "One of the best days you will ever have watching your team go toe to toe in a major final. Gutted to not get to see them win the shoot out but proud of them none the less.

"Also got amazing seats behind the royal box and got to see the future Kings, Boris, Beckham, Figo, Kate Moss and many others." Meanwhile fans couldn't help but gush over the adorable moment shared between George and his parents as one person wrote: “It really show's how normal and down to earth they're and how much they're protective of George.”

“This family is everything," another said, while a third added: “Such lovely and sweet parents.”

Although most people were delighted to see "lucky mascot" George at the high-profile match, others were "critical" of him. Robert Jobson, co-author of the book, Diana: Closely Guarded Secret, told Australian show Sunrise TV that the young prince could be taken out of the spotlight after football fans mocked him for wearing a suit and tie.

Speaking on Sunrise TV, Mr Jobson said: "With George, he got quite a lot of social media attention.

"Some were critical about him wearing a shirt and tie like his dad which I thought was very harsh."

Jobson added: "He has been very popular but I think they are going to try and keep him out of the limelight a little bit.

"They are very conscious of that.”

For all your updates on the Royal Family, sign up to our daily OK! newsletter.