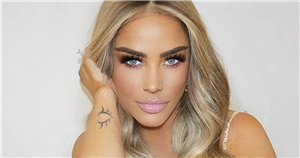 Katie Price is reportedly being offered a "substantial fee" to head Down Under and appear on the upcoming Australian series of Celebrity Big Brother.

The 43 year old found new heights of fame in 2004 when she headed to the Australian jungle to appear on I'm A Celebrity… Get Me Out Of Here!, becoming the only celebrity to ever appear on the show twice, returning in 2009.

But it seems she may be in for a more comfortable trip to Oz as she has caught the eye of the producers of Big Brother VIP.

If she took part, Katie would need to fly to Sydney in August to film for three weeks, but would also need to quarantine for two weeks beforehand.

However, it is believed she would also score a five figure donation to a charity close to both her and 19 year old son Harvey's hearts.

Katie is no stranger to the show's format, winning the British version of the show in 2015, beating Katie Hopkins, Calum Best, Keith Chegwin and Michelle Visage in the final.

A source told the Mirror: "Katie's really pop­­ular in Australia. If she goes on The Morning Show she always trends.

"There's real excitement about her – producers watched her on the British version and instantly knew she'd be a hit with Aussie viewers."

The insider added she had picked in part to her not understanding how she has won the UK series after being quiet and reserved in the house.

They explained: "That's exactly the reason she'd be great – it's a side of her we don't often see. There had been a few British names suggested, but Katie is the first choice.

"Every option is being considered to make this an offer she can't refuse."

However, a source close to Katie told OK!: "At this point there are no talks in place, but Katie's manager is certainly open to offers if they should be in touch."

Katie recently threw a huge surprise for her son Harvey as he celebrated his 19th birthday.

Katie had jetted off to Portugal with her fiancé Carl, but turned up at Harvey's school to surprise him on his big day.

A source told The Sun: "Katie was so excited about Harvey turning 19, and wanted to surprise him.

"She's planning another big celebration this weekend but went down to his school to give him a specially made cake."