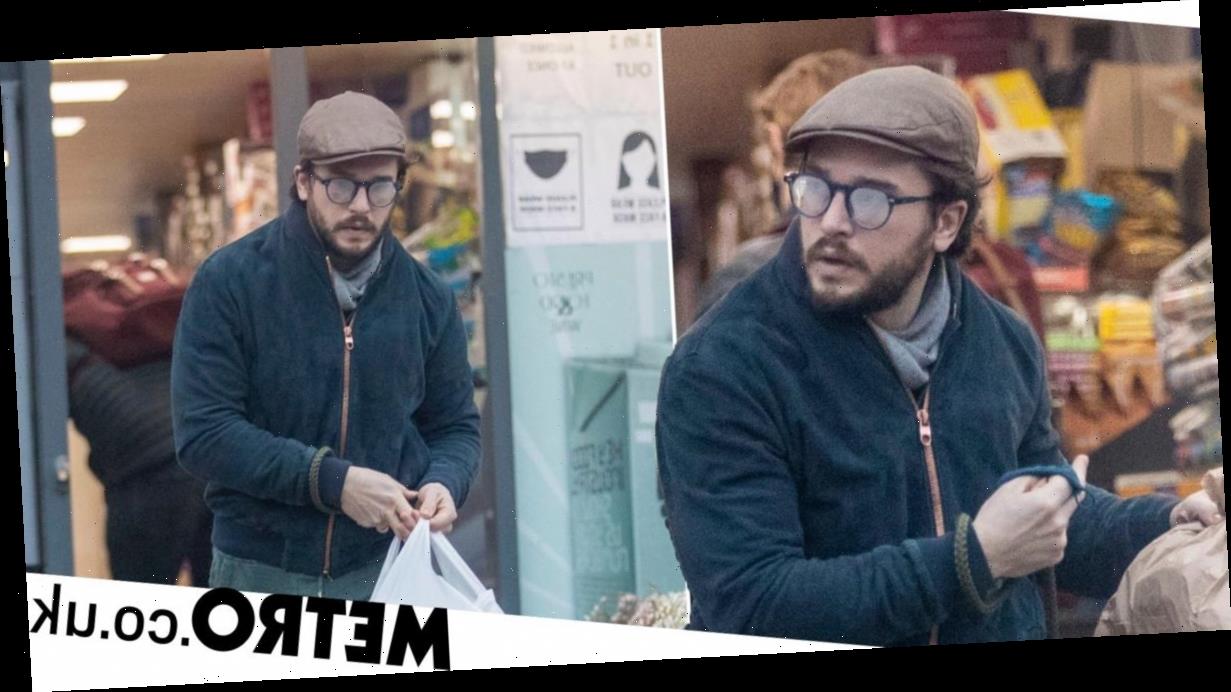 We’re used to seeing Jon Snow get a little steamy, but Kit Harington’s latest experience of things heating up was a far cry away from his Game Of Thrones alter-ego and nothing, if not, relatable.

The actor, 34, was seen popping out for a quick essentials run to his local shop and Kit was forced to face the perils that come with wearing a face mask and glasses.

Pictures of him out and about are probably a sign post for what was 2020, as poor Kit had to deal with his specs getting all steamed up thanks to his pesky (but, of course, necessary) protective gear.

The TV star was spotted struggling to see out of his glasses as he juggled with his mask and carrying his shopping, all while holding onto his dog’s lead.

Kit, we’ve been there too pal. The struggle is real.

Rocking a flat cap, a navy suede bomber jacket and tracksuit bottoms, Kit – who is expecting his first child with wife Rose Leslie – was dressed down for his brief stroll and was seen carrying a juice back for his baby mumma, no doubt.

The couple have moved back to England ahead of their baby’s arrival, with Rose telling Make magazine that she and Kit are finding it ‘glorious’ to be back living in the countryside.

‘What a glorious thing to be able to run to the countryside and recoup,’ she said.

Of the couple’s exciting baby news, Rose confirmed in a statement: ‘I am thrilled to be expecting, and I can’t wait to meet the new member of our family!’

While the baby will be the pair’s first child, they’ve both been brushing up on their parenting skills (to a degree), after welcoming their whippet puppy – who was seen out with John in a cute doggy jumper – into the family.

And it sounds like being dog parents is working out well so far for Kit and Rose – who starred alongside him in Game Of Thrones as Ygritte – with Rose telling the New York Post it was ‘wonderful’ to have a puppy at home, especially during lockdown.

Reflecting on one of the benefits that came with staying home during the pandemic, Rose revealed: ‘If we hadn’t been forced to stay behind our front door, we couldn’t properly train her and make sure she didn’t poop all over the house.’

The two stars got engaged in 2017, after falling in love on the set of HBO’s hit series Game Of Thrones while playing love interests.

Kit and Rose wed the following year in a fairytale ceremony held in Scotland in 2018, with many of their co-stars attending their big day, including the likes of Sophie Turner, Emilia Clake and Peter Dinklage.

While Jon starred on all eight seasons of Game Of Thrones, Rose’s character appeared in three seasons, before being killed off in season four.

Following the series wrapping for good in 2019, Kit blew viewers away with his first major TV role since, when he appeared in Netflix series Criminal as smarmy businessman Alex Daniels.