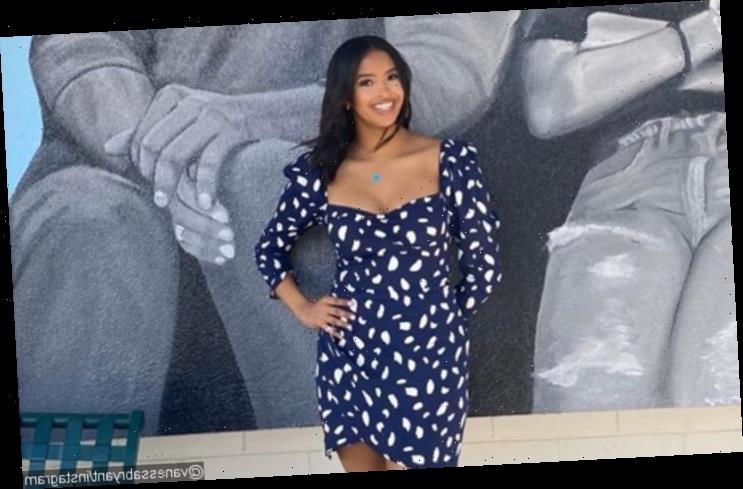 The NBA legend’s wife Vanessa Bryant shares on Instagram a picture of their 17-year-old daughter posing in front of a mural depicting her late dad and sister Gianna as she heads to her high school dance.

AceShowbiz –Kobe Bryant‘s eldest daughter is paying tribute to her late father and younger sister. A little over a month after the NBA legend and 13-year-old Giana tragically died in a helicopter crash, Natalia Diamante Bryant stopped by a mural art memorial honoring the duo before heading to her school’s winter formal.

Sharing the moment was Kobe’s widow Vanessa Bryant through her Instagram account. In her post dated Sunday, March 8, her 17-year-old daughter could be seen smiling brightly while standing in front of the tribute artwork depicting the famous photo of Kobe kissing Gigi on the head which were taken when they watched a Los Angeles Lakers game in November 2019.

Natalia wore a blue polka dot dress for the special occasion, while her mother Vanessa captioned her sentimental photo, “my babies. Natalia. #winterformal.” The latter has also changed her profile picture to one that displayed her posing in front of the mural with Natalia and her two younger children, Bianka and Capri.

The tribute post came just a week after Vanessa expressed devastation at reports suggesting Los Angeles deputies had shared pictures from her husband’s crash site. Calling it “an unspeakable violation of human decency, respect, and of the privacy rights of the victims and their families,” she demanded “that those responsible for these alleged actions face the harshest possible discipline, and that their identities be brought to light, to ensure that the photos are not further disseminated.”

Kobe, Gianna and seven other people were killed in a helicopter crash in Calabasas, California on January 26. The father and daughter duo were laid to rest in a private ceremony at Pacific View Memorial Park in Corona Del Mar, California two weeks after the tragic accident. On February 24, a Celebration of Life event was held at the Staples Center in their honor.