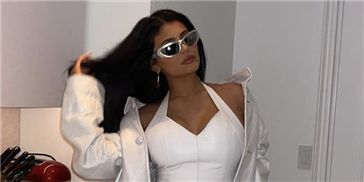 Last time Kylie Jenner was pregnant she managed to hide it from the world for basically a full nine months, meaning that nope: she wasn’t posting pics to Instagram. But Kylie went ahead and announced her pregnancy this time around, and now she’s out here posting cute photos of herself pregnant on the grid:

In case you missed it, which…there is literally no way on earth, but ya know, Kylie announced that she and Travis Scott are expecting their second child together with this sweet video. Come for Travis reaction to a positive pregnancy test, stay for Stormi surprising her grandmother Kris Jenner with Kylie’s ultrasound pics.

Speaking of Stormi, according to Us Weekly she is “so excited” about Kylie being pregnant, and “almost understands that she is going to be a big sister. She knows there is a baby in the belly!”

Meanwhile, a source told People that “Kylie is a few months along” and that “She has been wanting to give Stormi a sibling for a while. She loves being a mom. She is thrilled that she and Travis are pregnant again. She has been enjoying her pregnancy in private. She has only spent time with close friends and family.”

Obviously, Keeping Up with the Kardashians is no longer a TV show, which means we likely won’t see any BTS of Kylie and Travis as they prepare to become parents again. Buuuuut don’t forget that the Kardashians did sign a deal with Hulu and are expected to be coming out with another reality show soon. Either way, Kylie is all about documenting her pregnancy herself. Last time, she released a full 11 minute video about it, so!