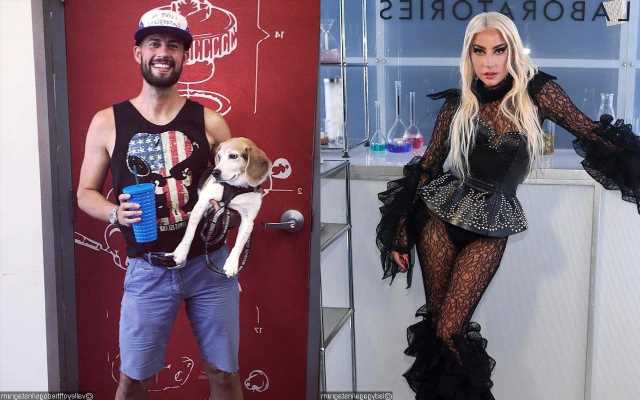 Less than three months after being shot in the incident, Ryan Fischer is caught on camera stopping by the ‘Born This Way’ hitmaker’s house in Los Angeles.

AceShowbiz –Lady GaGa‘s dog walker has finally gotten back to work. Less than three months after he got shot in a dognapping incident, Ryan Fischer was caught on camera in front of the “Born This Way” hitmaker’s house looking pretty healthy.

The 30-year-old stopped by GaGa’s Los Angeles home on Friday, May 14. In pictures surfacing online, he could be seen holding gifts and flowers as he wore a cropped tank, a vest and a pair of teal sweatpants. Although the singers’ dogs were not spotted with him, a source told TMZ that he walks them again but “during the day now.”

Ryan was discharged from the hospital in late March. At that time, he shared on Instagram a video of himself getting dressed while dancing lightly to Carly Simon‘s “Coming Around Again”. In the caption, he revealed that his lung “collapsed several times” after being shot four times in the chest in the February 24 incident.

After undergoing his latest surgery, Ryan noted, “I’m finding my way in the outside world where triggers are real and working through trauma is WAY more than dealing with one unfortunate moment in life, I look back at my exit from the hospital and smile that I continue to approach each day the same way.” He then reflected, “The journey is hard, it’s assuredly painful… And somewhere within that I find the absurdity and wonder and beauty this life offers us all.”

GaGa’s dognappers were arrested in late April. James Jackson, Jaylin White and Lafayette Whaley were hit with one count each of attempted murder, conspiracy to commit robbery and second-degree robber. Jackson, who allegedly shot Ryan, faced two additional firearm charges. Jaylin White, meanwhile, was hit with one count of assault by means of force likely to produce great bodily injury.

Two other suspects named Harold White and Jennifer McBride were also taken into police custody. They were charged as an accessory to the crime. The five suspects, however, have entered a not guilty plea in the dognapping.