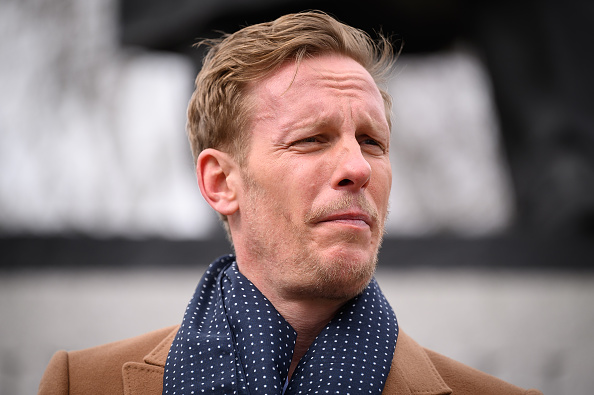 Laurence Fox has been criticised for sharing a meme about transgender women competing at the Tokyo Olympics.

The Lewis actor turned aspiring politician posted a version of the Drake meme – showing the rapper in the Hotline Bling video holding his hand up in one frame, and smiling in another – referencing Sha’Carri Richardson’s suspension over a positive cannabis test.

Richardson was suspended for one month, meaning she lost her place in the 100 metre women’s race at the Olympics, and was also left off the US relay team.

Fox, 43, shared the Drake meme with the Olympics logo over the star’s face, pushing away from a frame reading: ‘Chicks with weed.’

The next frame, next to Drake smiling, read: ‘Chicks with d***s.’

This appeared to be in reference to Laurel Hubbard, who will be the first openly transgender woman to compete at the Olympic Games after being selected for the New Zealand Olympic weightlifting team.

She will compete in the women’s 87-kilogram category.

While some of Fox’s followers laughed at the post, others called the meme transphobic.

One response read: ‘So the transphobia is fully out in the open now? Wtf Lozza? This is a tweet from a self-proclaimed politician?’

Others noted that they would be reporting the post, with one tweet reading: ‘Reported. He’s not even trying to mask his bigotry anymore. Stepping it up a notch after weirdly railing against the ‘woke’ England team (till his u turn after they started doing well) is a bold move.’

Metro.co.uk contacted Fox’s reps for comment and received no reply. However, he tweeted publicly in response: ‘I think allowing biological men to compete in female sports is misogynistic, insane and absolutely not within the spirit of fair play.

‘Why aren’t you standing up for women @MetroUK?’

This post came after Fox apologised for ‘being a d***’, for hoping that the England team would lose because they took the knee before matches.

Fox said he saw the anti-racism gesture as a ‘deep insult to those who work tirelessly for all the things we have achieved to become the genuinely inclusive, warm and welcoming society we are all part of’, but tweeted: ‘To say that I want England to lose just because of their kneeling, is a step too far. I should just have said what I felt about the kneeling and got on with supporting the team.

‘These are young men. Their intentions are no doubt noble, even if I continue to categorically disagree with what they are doing, saying I want them to lose doesn’t serve any purpose, especially at a time when national morale could do with a boost.

‘You can hate the kneeling and love the team, so that’s what I shall do.

‘I would love to see politics taken out of football, even politics I like. I hope that we can go back to just enjoying the beautiful game. It brings us together.’

Fox has founded his own political party called Reclaim, and earlier this year, he ran for London Mayor to ‘fight against extreme political correctness’.