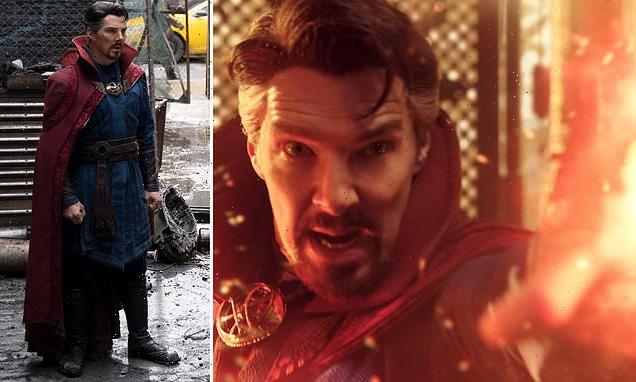 Dr Strange is a Marvel ripping yarn… and you’ll love the zombie! LIBBY PURVES reviews Dr Strange In The Multiverse Of Madness

Dr Strange In The Multiverse Of Madness (12A, 126mins)

Always satisfying to see a British actor, an ex-Hamlet no less, as a Hollywood superhero.

And you can see why Marvel — for whom one cosmos is never enough — needs our Benedict Cumberbatch as sorcerer Dr Stephen Strange, trespasser in multiple universes. He has a suavely deadpan, slightly depressed look, like a camel with a secret sorrow.

As this ripping yarn opens, he leaps around giant nightmare pipework in space, battles fireballs, vaporises someone and puts his tie on by magic to attend a socialite New York wedding. From which he promptly leaps from a window to battle a huge octopus, rescue a teenager and slice a bus in half.

And that’s just the warm-up, before discovering that the kid — Xochitl Gomez as America Chavez — is a refugee between universes. It may be partly Strange’s fault about the parallel universes, because he breached natural laws in the 2021 film doing a favour for Spider-Man.

And you can see why Marvel — for whom one cosmos is never enough — needs our Benedict Cumberbatch as sorcerer Dr Stephen Strange, trespasser in multiple universes. He has a suavely deadpan, slightly depressed look, like a camel with a secret sorrow 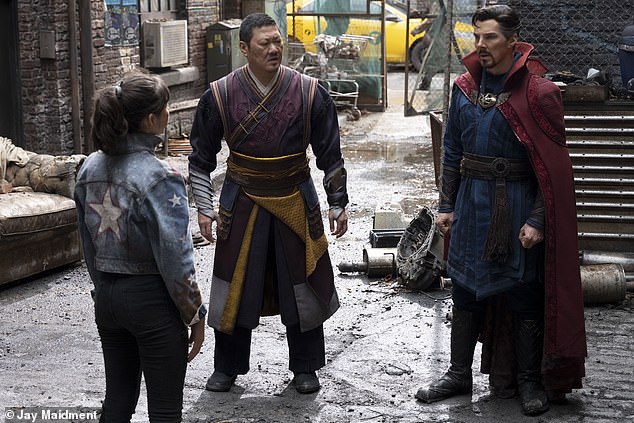 It is a massively entertaining two hours, even if, like me, you gave up superhero movies 50 years ago

But hey, fantasy fiction has long been stepping through portals to other worlds from Narnia to Harry Potter’s Platform 9 ¾, so why not?

Elizabeth Olsen’s Scarlet Witch Wanda is back, this time refusing to cooperate as a goodie and get herself ‘back on the lunchboxes’ (good Marvel merchandising joke). She wants to kill young Chavez in order to return to whichever universe it was in which she last saw her imaginary children (cue glorious clunky line ‘I’m not a monster, I’m a mother’).

It is a massively entertaining two hours, even if, like me, you gave up superhero movies 50 years ago.

This is Marvel on amphetamines, with a pleasingly lunatic, scrapbag diversity of cultural references from every century, religion and Saturday matinee cliche.

There are futuristic steel robots and a retro giant squid; telekinetic brain invasion and plain fisticuffs; a sacred Book of Ashanti and a sinister research institution.

There are ice fields and tunnels, mountains, caves, fortresses from ancient legends, stumping ogres from fairy tales and even the Illuminati.

And there’s good old Benedict Wong with his ancient Chinese warrior archers. They have magic shields, but also bows and arrows and 16th-century lines such as: ‘It is an honour to court death alongside you once again.’

Marvel’s own history is nicely referenced, too, when all the old superheroes turn up as a sort of committee.

Oh, and there’s a zombie. You will really like the zombie. So elaborately decomposed yet so recognisable and sexily paternal.

There’s a new thing, too: dreamwalking between your other selves, which creates nice cod‑psychiatric issues, because all superheroes are potentially prone to joining the dark side. 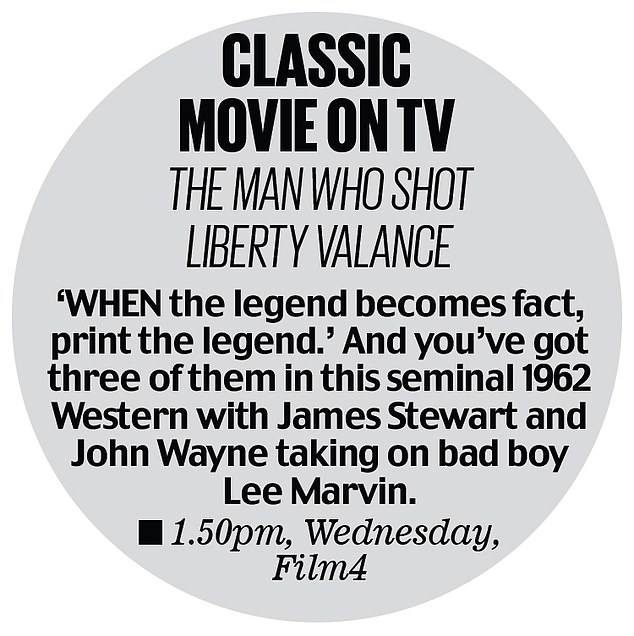 As for emotional issues there’s buried tragedy, sibling rivalry, pique, maternal grief, lost romance and for a tick in the LGBT box (young Ms Chavez has two Mommies — both mislaid in a wrong universe, but I’m sure they’ll be back).

I rather loved it. The landscapes are fabulous, especially Multiverse 838 where New York is covered in blossoming trees and the pizzas are spherical. There’s a really beautiful battle using musical notes as missiles and Cumberbatch throws himself around manfully. Patrick Stewart has a cameo on a sort of weird yellow mobility vehicle, and newcomer Gomez (from The Baby-Sitters Club on Netflix) is a sweetie.

Moviegoers on dates will also nod ruefully when Strange says his love life is ‘complicated’ and the kid asks: ‘More complicated than being chased by a witch through the multiverse?’

Intoxicating mix of decadence and horror

Cabaret is 50 years old, a darkly thrilling jubilee well worth marking with today’s triumphant re-release to the big screen.

It’s hard to overstate both its brilliance and its shockingness at the time: eight Oscars were won by a musical set in 1931, the last throes of the German Weimar Republic, as the currency collapsed and the Nazi Party grew strong.

Based on a stage musical (with music by Kander and Ebb) which, in turn, echoed Christopher Isherwood’s semi-autobiographical novel Goodbye To Berlin, the film is decadently gorgeous and musically unforgettable. At its heart is both the breathtaking cabaret nerve of Liza Minnelli and the diabolic, unnerving presence of Joel Grey as the Kit Kat Club’s MC. 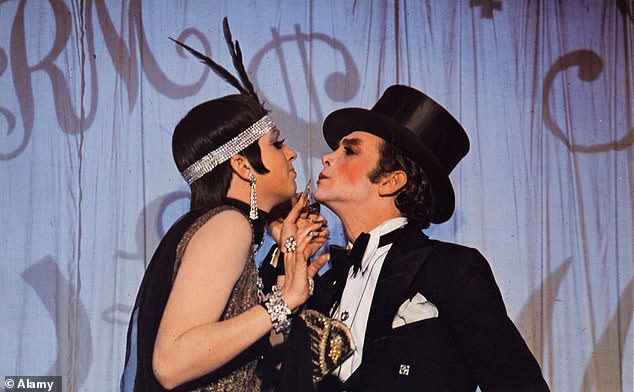 At its heart is both the breathtaking cabaret nerve of Liza Minnelli and the diabolic, unnerving presence of Joel Grey as the Kit Kat Club’s MC

One old man, maybe Jewish, lowers his head in dark awareness of what is to come. It is still the most gut-wrenching evocation of the populist power of fascism. In the Kit Kat Club, songs such Mein Herr, Money and If You Could See Her drip cynicism and worse as a blind-in-one-eye audience laughs in Europe’s last-chance saloon.

n another creative partnership is filmed with equal honesty, though more lugubrious in tone.

Andrew Dominik records Nick Cave’s work with Warren Ellis on the singer’s last two albums, Ghosteen and Carnage, in This Much I Know To Be True.

There are reflections on Cave’s themes of love and mortality.

His songs are about longing, ambiguity, death, violence and deep spiritual searching. As he sings, the pair work on arrangements with other musicians.

Hearing him and seeing him work so intensely is both slightly absurd in its funereal sincerity and, when you surrender to it, wrenchingly moving.

For his fans, the film will be an immense treat. But others will also get a real sense of meeting a fascinating artist with a unique vision. And, importantly, appreciating the fearless emotional openness of an artistic friendship.

Verdict: Quick on its fee

Barry & Joan is an elegant film, in which Audrey Rumsby follows an elderly couple, the Granthams: she a little old thing at the piano; he dancing in his baker-boy cap and tappety-tap feet, both passing on their skills.

The Granthams, teenage stage sweethearts now 75 years together, are Britain’s ‘best-kept theatrical secret’, still performing and teaching. Vaudeville is part of their tradition. But they are into everything, from commedia dell’arte to mime, eccentric dance and David Bowie. Barry was in Oh! What A Lovely War and Laurence Olivier advised him on acting (‘Just check your flies and go on’). 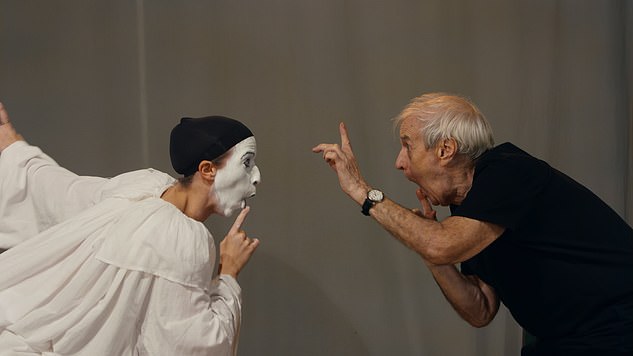 Barry & Joan is an elegant film, in which Audrey Rumsby follows an elderly couple, the Granthams: she a little old thing at the piano; he dancing in his baker-boy cap and tappety-tap feet, both passing on their skills

There’s drag, nudity and the Norwegian Pillow Dance. They have toured as far as Leningrad and keep their young students on their toes. ‘Such a mess, living! Not tidy,’ says Barry happily. ‘We old people are meant to conform!’ They don’t.

It’s touring small cinemas from Manchester to Cannes this month.