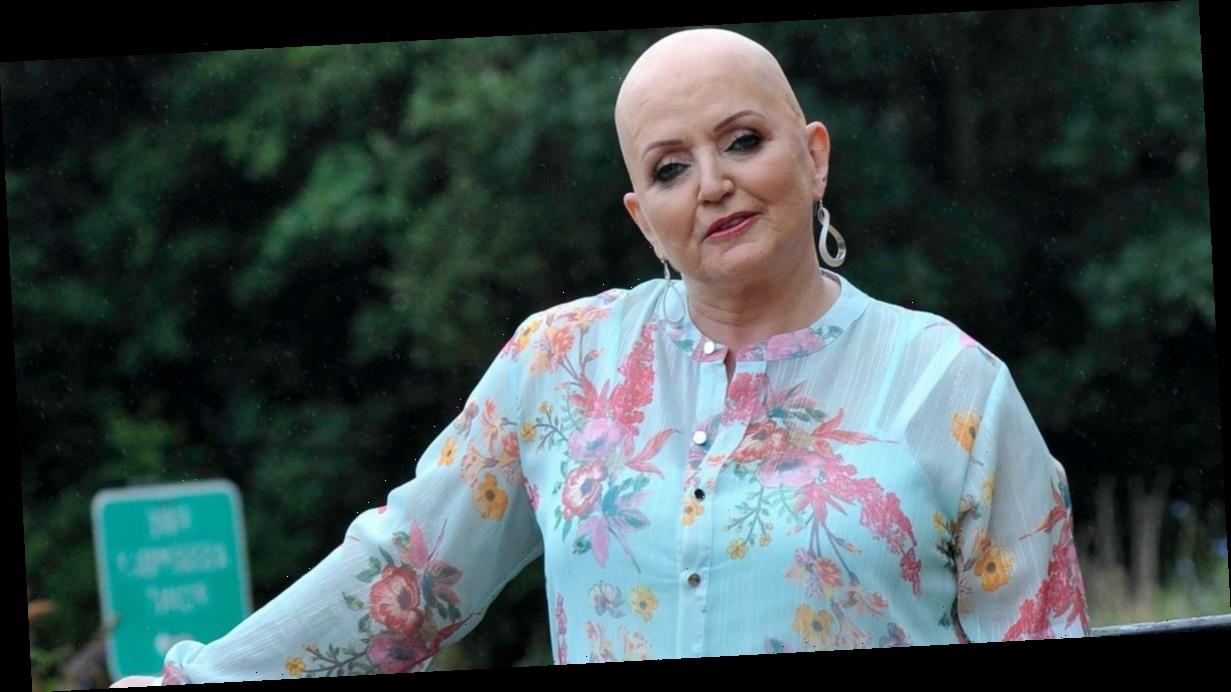 When Linda Nolan was diagnosed with breast cancer 15 years ago, she never imagined the unbelievable effect it would have on her life, or that she’d be sitting with us now, discussing how the disease has spread to her liver.

The 61-year-old found fame in the 1970s and 80s with her sisters – Anne, Denise, Maureen, Bernie and Coleen – in the chart-topping group The Nolans, who had hits such as I’m In The Mood For Dancing and Attention To Me .

But life since has been blighted by cancer, with Linda and her family being dealt several devastating blows at the hands of the illness. After 26 years of marriage, in 2007 the disease took the life of her husband Brian Hudson, and six years later that of Bernie. All the while, Linda supports Anne who has been fighting the disease since 2000.

But as soon as we call Linda for a catch-up on how she’s been doing, her strength comes shining through. Although the Celebrity Big Brother star is delighted about Anne recently being given the all-clear, Linda received the news that her cancer had spread.

It was a huge blow but, although terrified, Linda has put her all into a new project to distract herself from the pain – she’s launched her own gin, named Hudson’s Gin, after her husband.

Here, Linda reveals the inspiration behind her venture, tells us how she remains upbeat during the dark days and says cancer has made her closer than ever to her sisters…

Hi Linda! How have you been feeling lately?

I’m trying to be positive. But there are days where I close my door and slide down my wall, thinking, “What am I going to do?!”I am scared, I won’t lie. I am so scared of dying. We’re all Catholics and, as a kid, I’d go to Mass, where you learn about heaven and God. You’re told when you get to heaven you’ll see everyone you love. As an adult, I really hope it is like that! I so hope to see Brian and Bernie. I look at my great-nieces and nephews and think how much I’d love to see them growing up. That’s hard. I want to be here when they have fabulous moments at school and their prom. Then other times I think to myself, “Well, you will be here, so shut up!” I am really positive, but there are some days when I just give in.

That’s understandable. You must miss Brian at times like these…

Oh my God, yeah. I miss Brian every day of my life. There’s times in the middle of the night when, although everyone is there for you, you’re on your own. When Brian was alive through my first lot of chemo in 2006, I’d sit on my bed feeling rubbish but he’d just rub my back and be there. I miss him at times like that. But he made me the woman I am and he made me strong. He had skin cancer, bless him. I took a lot of inspiration from him, like the way he just got on with it. I was lucky to have had him. A lot of people don’t have the love of their life, ever, but I did for 26 years.

Are you going into hospital to have chemotherapy?

I’m having chemotherapy tablets. I take 10 in a day, so five in the morning and five at night. I can do all that from home, which is great. But I do go in every three weeks to have my bloods done and see my consultant. I was lucky because Anne was having chemotherapy at the same time as me. At least there was a friendly face that I knew.

That must have been such a comfort to you both…

Yeah! Within two weeks Anne had found a lump and my MRI showed that my cancer had metastasized, which means the cells have gone elsewhere. I have secondary breast cancer which metastasized first into my hip and then in May to my liver. It’s very scary when they tell you those things.

How has Anne been?

Anne’s been great. Her first cancer was in 2000, which was breast cancer, which meant she needed a lumpectomy, chemo and radiotherapy. This time, 21 years later, it was a new cancer they found, it wasn’t a secondary like mine was. In a way that was better because they attacked that with everything. She really struggled with her chemo and was in hospital for 11 days at one point with an infection. But now her treatment is finished and there’s no sign of the disease at all. It’s amazing news. She got that news the week before I went in and mine had spread. Our stories were very different but there were some things that we had in common. We’ve written a book about the experience called Stronger Together, which is out in April.

Has this brought you and your sisters a lot closer?

I think it has. Our show The Nolans Go Cruising did a lot for us. We hadn’t spent 24/7 all together, apart from when we were touring. Coleen jokingly said that we might do the show and never speak to each other again! But honestly it was so fabulous and did bring us closer together. It made us more tolerant of each other and the fact that we’re all different. Tell us about this gin you’ve spent lockdown making!

Well, I’m a gin drinker, so my manager suggested that I make my own. We enlisted the help of a Yorkshire-based distillery called Sloemotion. I did lots of tasting with a friend of mine and we decided on a passion fruit with watermelon flavour. It’s a lovely summery drink. I named it Hudson’s Gin which is my married surname – the ultimate tribute to my beloved Brian.