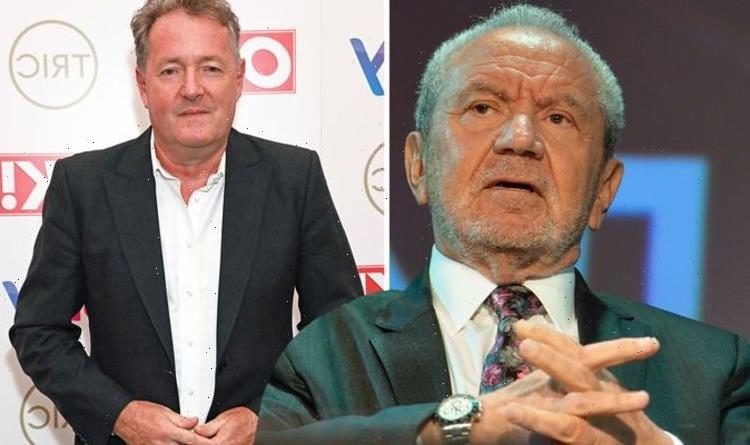 Meghan and Harry: Piers Morgan discusses couple on GMB in 2019

Piers Morgan, 56, shared his thoughts on The Queen’s New Year Honours list released this week, which includes Mel B, Emma Raducanu and Professor Chris Whitty as participants. Taking to his Twitter this evening, the presenter jokingly questioned why he wasn’t a part of it.

In view of his 7.9 million followers, he wrote: “Very disappointed not to have made the honours list this year.

“After all I’ve done for this Govt, it’s baffling they haven’t rewarded me with at least a knighthood for services to holding miserably mediocre ministers to account.”

He added having “Sir Piers” as a title would have to wait for now.

In a swipe at the journalist, Lord Sugar commented: “Knight’s are a very elite circle of people.

“The problem is your head is so far up in the clouds the queen would not be able to tap you with the sword, she may be tempted to ram it where the sun does not shine.

“An anagram of Sir Piers Morgan is orgasm inspirer.”(sic)

The businessman was knighted in the 2000 New Year Honours for services to the Home Computer and Electronics Industry.

Mandy Miller wrote: “Problem is this country is full of YES people! You’re a breath of fresh air which they do not like!”

Karen commented: “He doesn’t really expect to get knighted, he’s only trying to wind up his haters. Think it’s working.”

Janina J added: “Don’t worry, I’m sure you’ll get one when you Prime Minister.”

Kathy B penned: “You did really well with the politicians Piers during the height of the pandemic. However, maybe your constant criticism of [Prince] Harry and Meghan [Markle].”

Piers had many heated exchanges with politicians about the coronavirus pandemic during his time on Good Morning Britain.

At one point, MPs were said to have boycotted going onto the show due to his confrontational interviews.

Piers had previously accused the Government of “cowardice” for not fielding members of the Cabinet for questioning.

The journalist’s time on the show came to an end last March after sparking over 57,000 Ofcom complaints.

Viewers expressed their fury following remarks he said about Meghan after her interview with Oprah Winfrey.

The presenter said he didn’t believe a word she said as she opened up about her life in the Royal Family.

Addressing his exit, he said he had to “agree to disagree” with ITV as he refused to apologise.