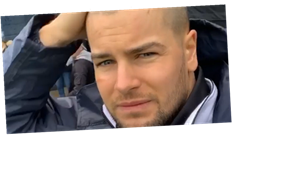 Chris Hughes has shaved off his long floppy hair and opted for a buzz cut for his film debut.

The reality star, who was spotted not social distancing on a night out in October, has shocked fans by revealing his new hairstyle.

Taking to Instagram, the 27 year old took off his hood in a video clip and showed off his new bald look.

Chris can be seen at a football stadium and on the sets of his new film Rise Of The Footsoldier: Origins, where he will be seen playing a rowdy football fan.

Fans of the Love Island star took to the comments section to give their verdict on his new look.

One fan wrote: "Work it babes, really suits you!," while another added: "How do you still look good."

A third follower wasn't too keen on the buzz cut and said: "Omg omg want u do. No no I love u with hair. Omg omg."

"Thought it was @davidbeckham for a minute," a fourth Instagram user commented.

Jesy Nelson's ex also had some admirers of his new look in the form of his celebrity pals.

Former TOWIE star Mario Falcone said, "I like it", and Made In Chelsea's Oliver Proudlock wrote: "looking sexy boyoooooo."

Dancing On Ice winner Jake Quickenden commented: "Love it, handsome bastard no matter what the hair style, making moves on the big screen, I'd shave me ball sack and stick that hair on my head to star in a film…. go for it!! Love you."

Chris will be starring alongside Vinnie Jones and Keith Allen in the fifth film of the Rise Of The Footsoldier series.

As well as making his first appearance in a film, the television personality, who said he feels his sperm is wasted after splitting from Jesy Nelson, has also signed up to star on ITV's The Real Full Monty.

The show sees a group of celebrities strip off for charity and raise awareness for cancer.

In previous editions of the show, the group are split into men and women, with both groups having to learn choreographed dance routines.

However, this time there is an extra added twist, as the group will be baring all while skating on ice.