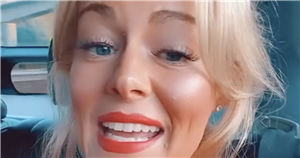 Love Island star Georgia Townend has revealed that she found the special Aftersun episode 'awkward' and struggled to stay 'awake'.

The 28 year old, who previously described herself as the 'life and soul of the party', took to Instagram to share her opinion on the Love Island Aftersun: The Reunion episode with her 100,000 followers.

Georgia, who was dumped from the island after she entered the show alongside Abigail Rawlings and Tyler Cruickshank, gave her opinion as she travelled in the back of a taxi to fellow Love Island beauty Liberty Poole's birthday party.

Speaking about the episode, she said: "I've seen it described as boring, monotonous, pointless, the very definition of that could have been an email didn't need to be a meeting – oh my God!

"I have to agree with you! I didn't particularly enjoy it, I didn't think the questions were probing enough, I feel like there was a lot of tension there and it was awkward and we could have delved a little bit deeper!

"The studio was absolutely freezing, honestly, I could have sworn that my nipples were going to fall off at one point and I said to the producers, 'if you see two little pink balls rolling around please return them to me because they are my nipples!'

"But at least it was cold enough to keep me awake! I guess that is the issue of having a live show rather than a pre-recorded show because it meant that Laura was having to get through everything that was on the agenda and not really having the time to delve deep into all of the little bits and bobs rather if it was pre-recorded then editors could have pre-selected the best bits."

It comes after winners Millie Court and Liam Reardon gathered with the stars of the latest series for one last on-screen showdown.

However, the show was criticised for the lack of action, with some fans posting on social media that the show ‘gave them the ick’.

“This reunion is so awkward; why is no one laughing at the jokes,” one fan questioned, while another commented: “This reunion show is awkward and not in a good way.”

Another tweeted: "That love island reunion was painfully boring."

Meanwhile there was one notable absence in the form of Jake Cornish with Laura Whitmore revealing that he wouldn't be joining for the evening. "So, sadly, Jake can't be with us this evening as he isn't feeling very well," the presenter said.

"But get well soon and sending you lots of love."