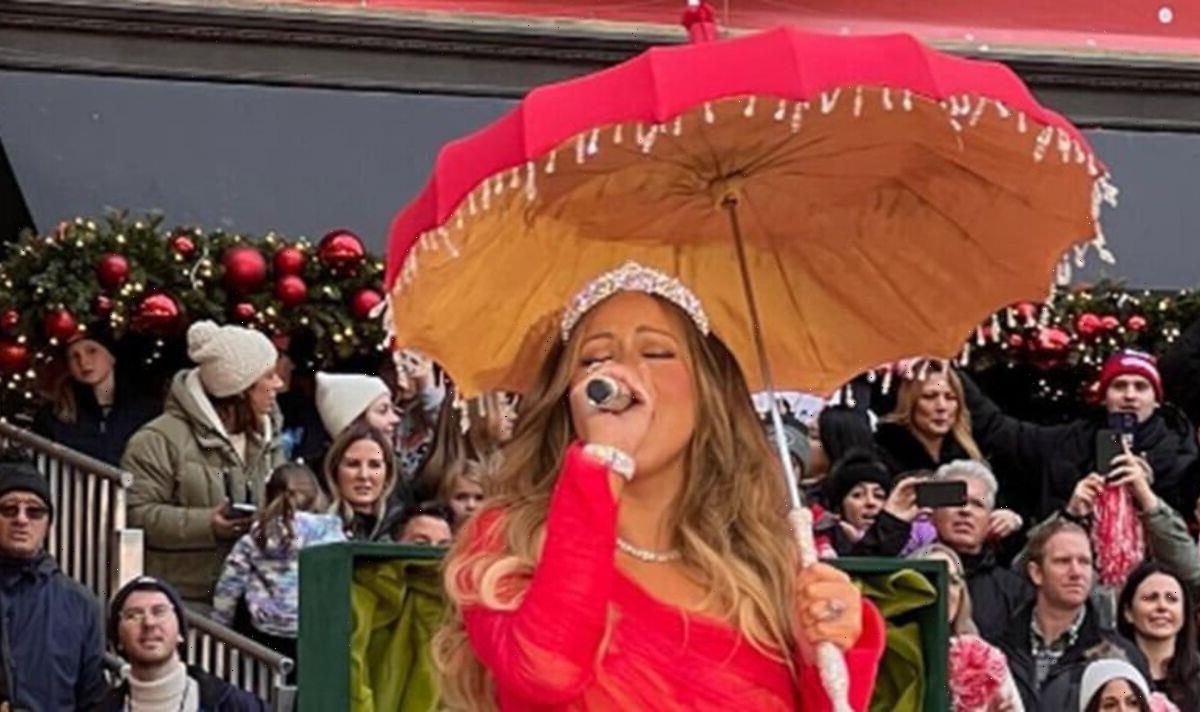 Mariah Carey, 52, is known for her Christmas hits including All I Want For Christmas Is You, with the pop singer even branding herself the “Queen of Christmas”. However, her comeback performance at Macy’s Thanksgiving Parade has been highly criticised, with many Twitter users accusing the pop singer of “lip-syncing” due to the similarity of her vocals to the 1994 hit.

For lip-syncing Mariah Carey. The disrespect.

Mariah performed to thousands today in Manhattan as she sang her Christmas hit alongside her two twin children Moroccan and Monroe, 11.

She stunned in a tight-fitted red gown, paired with a sparkling tiara and red umbrella as she sang her heart out to the annual festive song.

However, Mariah’s performance was slammed as many believed the star was “lip-syncing” due to her voice’s similarity to the 1994 recorded single.

Many social media users took to Twitter to vent their opinion on Mariah’s performance.

“She isn’t the queen of Christmas. She probably even gave herself that nickname!”

Jamesno1996 responding to a social media user calling it a “killer performance” replied: “Killer performance, the girl she stood there and barely lip-synced to the original recording from 20 years ago.”

JuliaGanas added: “I watched the #MacysThanksgivingDayParade for 3 hours just to see @MariahCarey lip sync. Worth it.”

However, other social media users took to Twitter to defend the pop singer and her Thanksgiving performance.

Ajn1231 said: “To all the Mariah haters, all performances at the Thanksgiving Day Parade are lip synced…”

Bsrs07 added: “Wear that Crown Mariah! Because you are the only true and official Queen of Christmas!!”

While Mariah was performing her children danced behind in Christmas boxes, with the singer taking to Instagram to talk about the performance in view of her 11.3 million followers.

She penned along with several shots from the parade: “Happy Thanksgiving!!! Grateful and so proud of my beautiful kids Roc and Roe, grateful for the family and for the precious moments in life. Now it’s reaaaallly time!!!” (sic)

Mariah also shared a separate snap of herself posing in a limo prior to her performance as she admitted she is “basking in gratitude” after her iconic performance.

Mariah’s “lip-syncing” criticism comes after the legendary star performed in 2016 at Times Square but there were several technical problems that left her completely out of sync with her track.

The lip-syncing error saw her storm off stage while the backing track of Emotions and We Belong Together played in the background.

She appeared unable to hear any backing track, so stopped pretending to sing and put a hand on her hip while the vocal track of her voice carried on without her.

The singer then began pacing back and forth on the stage in embarrassment, telling the crowd: “I’m trying to be a good sport here!”

Mariah then began to confuse her backing dancers as she exclaimed: “‘It is what it is. It just doesn’t get any better.”

The singer left the stage, before saying that “s**t happens” in an Instagram post after the set.