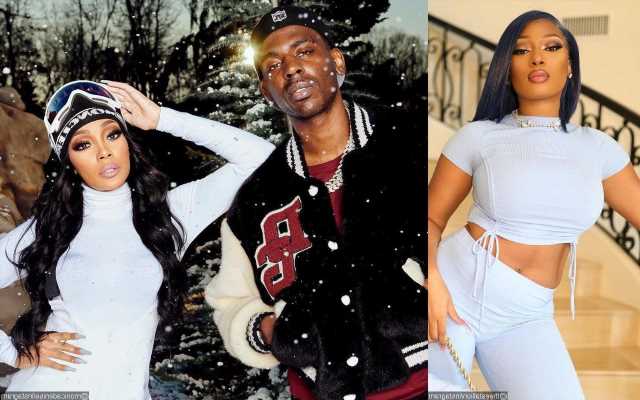 Tributes pour in from hip-hop community, including the ‘WAP’ hitmaker, Offset, Quavo and Rick Ross, after the ‘Aspen’ rapper was shot and killed while he was shopping in a cookie store.

AceShowbiz -Hip-hop community is in mourning following the sudden passing of Young Dolph. After news broke of his death in a shooting, the likes of Megan Thee Stallion and Monica expressed their grief on social media.

Taking to Twitter, the Hot Girl Summer wrote, “I am sooo sick rn I am in disbelief! Praying for his family and friends ! Rest In Peace to my friend a true legend dolph.” She also posted on Instagram along with a picture of the late rapper, “Everybody that know me knows I play this man music EVERY DAY ! He was so genuine so real so kind to me and tfarris always !!! Rest In Peace to a real legend.”

Monica said her “heart is shattered” as she just had a FaceTime with Dolph one day before he was killed. “I had no idea that last night would be the last time I saw your face!” she captioned photos of her with the Chicago native. “I told you , you were my brother & that’s how it will remain FOREVER ADOLPH #UntilWeMeetAgain To your Family especially Your Wife & Children I am here!!”

Gucci Mane was also grieving as he posted on Twitter, “R.I.P. to my friend Dolph this broke my heart.” Rick Ross simply wrote, “RIP Dolph.” Quavo tweeted, “DAMN! This One Hurt. RIP DOLPH!” while his fellow Migos star Offset added, “R.I.P DOLPH PRAYERM FOR YA KIDS AND FAMILY SMH.”

Asian Da Brat shared, “Dam dolph just asked me to go on tour with him in February & I said yes. Dam man RIP.” BIA said she was “hurt” as she revealed, “My house LOVES DOLPH this one hits hard! Praying for his family and all his loved ones. He was so humble man this is bulls**t. There is no love in these streets smh.” Erica Banks chimed in, “So sad RIP Dolph.”

Deion Sanders, meanwhile, paid tribute by sharing a video of Dolph jamming with his fans. He revealed his prayer in the caption which read, “Lord please cover the entire @YoungDolph family, friends and loved 1z. We thank u in advance Lord in Jesus name Amen.”

Dolph, whose real name was Adolph Robert Thornton, Jr., was gunned down in Memphis, Tennessee on Wednesday, November 17. He was shopping inside a cookie store when a gunman opened fire.

His attorney and friend Scott Hall tells TMZ the “RNB” spitter was in town for his annual Thanksgiving giveaway, which was scheduled in his old neighborhood on Wednesday afternoon. He planned to head to the event right after visiting the cookie store.