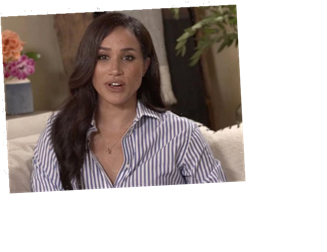 When Prince Harry and Meghan Markle stepped down from their roles as senior members of the royal family and announced their plans to move to America, it was widely assumed that the couple would make regular trips to the UK for official business.

Over a year after they left London, however, Meghan has made the return flight only once.

And while it may have been Covid-19 concerns that prevented her from doing so at first, at this point, it seems that Meghan  simply has no desire to make the trip.

The UK tabloid press has taken notice, of course, and it seems they’re interpreting her absence as a massive snub to the British people.

(Yes, London gossip hounds are continuing to make bad faith arguments about Meghan’s every action in 2021. Shocking, we know,)

Now, the Telegraph has taken the speculation about Meghan’s absence a step further and concluded that the Duchess of Sussex “abandoned” her plans to become a British citizen.

That might sound like an obvious statement, given the fact that Meghan has spent the past year dividing her time between Vancouver Island and Los Angeles.

But for a long time, the assumption was that Meghan planned to pursue dual-citizenship, so as not to be the only member of the Royal Family who’s not even a citizen of the country that bestowed a title upon her.

As The Root reports, the events of recent months seem to have complicated that plan.

For starters, there’s the rumored outrage over Harry and Meghan’s business deals.

Insiders say Prince William and others are furious with Harry for signing a contract with Netflix, despite the fact that the streaming service is home to the controversial drama series The Crown, which focuses on the reign of Queen Elizabeth II.

The deal has exaccerbated an already tense situation and led to concerns that the original “Megxit” agreement will not be renewed when it comes up for review next month.

While Harry is reportedly planning to return to London for the negotiations, it seems he will not be joined by Meghan.

And faced with the prospect of being stripped of all her royal privileges, it seems Meghan has understandably decided not to concern herself with attaining British citizenship.

According to the UK’s  official government website, in order “to apply as the spouse or civil partner of a British citizen you must have lived in the UK for the last three years.”

Clearly, Meghan does not meet any of those requirements.

Despite rumors to the contrrary, however, this does not mean that Meghan and Harry are planning to quit social media forever and retire from public life.

“Yes, the Duke and Duchess of Sussex will continue to have a social media platform,” a rep for the couple said in response to questions about the Sussex’s recent silence.

“They look forward to continuing their use of social media and believe that their updated media approach will enable them to share more, with you, directly.”

According to a new report from People magazine, despite the sacrifices they’ve made over the past year, the Sussexes have no regrets about their decision to take “a huge leap of faith to embark on their new life.”

“It was always their dream to be financially independent and pay their own way,” an anonymoys insider recently told the outlet.

“Harry was finally doing what he’d wanted to do for years, and to have Meghan and [19-month-old son] Archie with him was all he could have asked for”

Those who are familiar with Harry and Meghan’s independent streaks — and their desire to serve humanity as they see fit — are not surprised by these developments.

“To stay in the royal system is to go along with subservience to those more senior than you,” says royal historian Robert Lacey. “[Harry] has asserted his own identity.”

And fittingly, he’s married to one of the most corageous trailblazers of the 21st century …