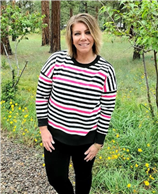 We aren’t certain if the Sister Wives star has truly moved on from awful husband Kody Brown via a fresh lover or not — but we do know she seems pretty pretty excited about a potential future.

Personally speaking, that is.

On the professional front, conversely?

Brown has no interest in making any changes any time soon.

The TLC personality has come under fire of late for her close ties to LuLaRoe.

The apparell company is the subject of a new documentary that aims to expose its shady business practices as nothing but a pyramid scheme.

In short, the four-part film interviews ex-employees and attempts to shed light on how higher-ups at LuLaRoe simply profit off the hard work and donations of those on the lower rung of the company.

When a salesperson starts off, he or she must fork over money in exchange for goods to sell.

This money goes directly into the pockets of those such as Meri Brown, while the new salesperson is left on his or her own to move the merchandize he or she has purchased.

“(LuLaRoe) was tailored to and sold to a lot of women who are stay-at-home mothers (which is) a very isolating experience in this country, unfortunately,” explains Julia Willoughby Nason, who co-directed documentary with Jenner Furst.

She has been involved with LuLaRoe for years, while Christine Brown later came on board in 2020.

Neither woman has yet commented on the scathing documentary or the scandal that has emanated from it… but Meri just made her stance on the company very well-known.

And she’s not backing down.

“Five years into my journey with @LuLaRoe and I couldn’t be happier,” Meri wrote yesterday on Instagram, expressing extreme defiance.

“Five years of finding my happiness, serving others, making amazing friends across the country, and yes, even outside of the US.

“I often ask myself why I didn’t get involved with the company sooner, you see, I had actually met @deannelularoe prior to the company even existing.

“But then I remind myself, there’s a reason for timing.”

Meri just recently returned from a LuLuRoe-sponsored trip to Cancun — which is the exact sort of benefit a superior such as herself gets to enjoy within the organization.

“There’s a reason things happen the way they do,” Brown continued.

“I know in my heart that the timing for me to find LuLaRoe and get involved at the time I did was right for me, for my well-being, for my healing.

“And that’s what these past five years have done for me.”

As the documentary explains, Meri — whose marriage to Kody has totally and completely fallen apart — is the target demographic for LuLuRoe… for all the reasons she just confessed to herself.

The reality star went on to write on Tuesday that the company has “helped me heal, helped me find peace and joy, helped me discover the ME I have always been, and who I, at times, was hiding from and running from.

“It feels good to be at peace, to know that my happiness only comes from within, and that whatever external forces are trying to bring me down, well, they can just keep trying.”

To be clear, we do want Meri Brown to be happy.

But not at the expense of other lonely women.

To conclude her post, which was basically an eff-you to critics, Meri wrote:

I’m loud and proud LuLaRoe. I’m grateful to have a company like this to be involved with, a company flooded with women and men who lift each other up, a company that wants to see me succeed, a company whose owners pray for each one of us daily, a company of integrity.