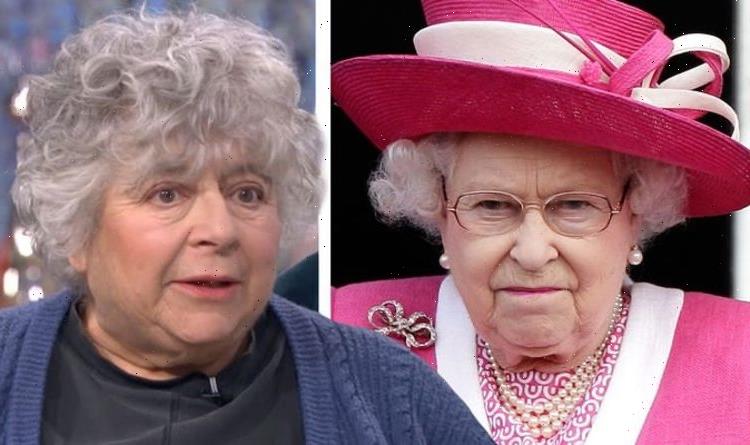 Miriam Margoyles, 80, recalled receiving a “royal reprimand” by The Queen; a meeting she had dreamt about all her life. In her new book ‘This Much Is True’, the Harry Potter actress discussed her one and only encounter with Her Majesty, who told her sharply to “be quiet”.

Her Majesty turned back to me and said sharply, ‘Be quiet!’

In the expert reported in the MailOnline, Miriam remembered her nerves as Her Majesty approached her during the annual reception for British Book Week at Buckingham Palace, and asked her what she did for a living.

“That was where I made my first mistake: meeting the royals does tend to make people daft,” she sighed.

Miriam cringed as she continued: “Her Majesty looked at me wearily, rolled her eyes heavenwards, sighed and turned away to my Scottish friend.”

Asking him the same question, Miriam revealed he handled the query much better.

“Listening beside him, I couldn’t help joining in,” she wrote.

“Her Majesty turned back to me and said sharply, ‘Be quiet!’

Looking back, she shuddered as she added: “Everyone looked down, trying to contain their embarrassment at my gaffe.

“Undeterred, I spoke again, ‘I’m so sorry, Your Majesty, I got carried away with excitement.'”

But things only seemed to get worse from there on out for poor Miriam.

Noting The Queen “rolled her eyes again” at her explanation, she remembered she started talking about how that morning she had visited a London school and been fascinated by the way English literature was taught there.

“I was keen to respond so, once more, ignoring the royal request for my silence, I blurted, ‘But, you see, Your Majesty, we are so lucky to be born English and to have English as our first language.

“‘Imagine, for example, Your Majesty, if we had been born…’

“I paused, looking for a country that didn’t boast much of a literature, and came up with… ‘Albanian!'”

Realising she had stepped into political territory, the BAFTA-winning actress believed it had become all top much for Her Majesty.

“Alarm crossed her face and she moved away, anxious to put some distance between herself and this clearly crazed woman,” she winced.

“Clutching the handbag even more closely and murmuring, ‘Yes, yes’ to herself, she disappeared into the throng.”

Adapted from This Much Is True, by Miriam Margolyes, published by John Murray on September 16.