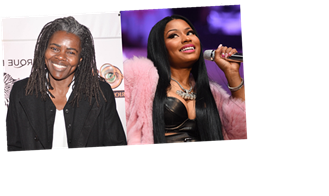 Nicki Minaj has agreed to pay up to settle copyright infringement claims by Tracy Chapman.

According to federal court documents obtained by ET, Minaj will pay Chapman $450,000 to satisfy her claims over the rapper’s unreleased song, “Sorry,” which sampled Chapman’s song, “Baby Can I Hold You.” The case will not go to trial.

Chapman filed her case in October 2018, after the release of Minaj’s fourth studio album, Queen. “Sorry” was a potential song on the album, but was never officially released after Minaj and her team sought a license for Chapman’s song and were rejected.

Notoriously guarded about allowing samples of her work, Chapman alleged in her suit that Minaj then leaked the song to popular New York City radio DJ Funkmaster Flex, which led to the song being shared on the internet.

In a previous district court order in the case, a judge agreed that Minaj had a fair use right to use the song in the studio so she could experiment with her music. The judge also agreed that Chapman has “requested samples of proposed works before approving licensing requests herself because she wanted to see how [her work] will be used” and that “uprooting these common practices would limit creativity and stifle innovation within the music industry.”

In settling with Chapman before trial, Minaj avoids the legal investigation of who was responsible for the leak. The rapper certainly has her hands full these days — not only with music but with her upcoming HBO Max docuseries and her adorable 3-month-old son, whom she recently shared the first picture of with fans.

See the super cute pics in the video below!

Nicki Minaj Shares First Full Photos of Her Baby Boy and He Looks Like Her Twin!