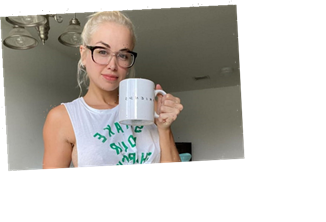 Paola Mayfield faces off with her share of haters, including mom-shaming trolls who think that motherhood means wearing a nun’s habit.

Recently, she’s faced off against some vicious body-shamers, and the gorgeous fitness model is handing down some epic clapback.

Paola has taken to Instagram and shared a short video, which we have included in this post.

She stands in her underwear, showing off her incredibly flat torso and rock-hard abs.

Pao even lifts part of her bra so that her followers can get the whole picture.

“You can wash your jealousy off with my abs,” she tells her haters in her caption.

“I’ve seen a lot of comments about people saying that I did a tummy tuck,” Paola says in the video.

“I don’t really know how to start,” she expresses.

While there’s nothing wrong with a tummy tuck, Paola is a fitness model. She doesn’t need one, folks.

She says that the tummy tuck allegations are absurd “because this is dedication.”

Gesturing to her abdomen, Pao says “this is hours at the gym.”

“This is discipline,” her statement concludes. “This is self-love.”

This is not to say that Paola Mayfield has never gone under the knife.

She has seemingly admitted on social media to getting breast implants.

At present, Pao has shared plans to return her boobs to their natural state.

But she has one obstacle in her way: 1-year-old Axel.

(This is considered a fairly normal time to still be breastfeeding, even in the US)

Obviously, getting implants removed would entail some serious recovery time.

With that in mind, Pao has told curious followers that she is waiting until Axel is totally done breastfeeding before she gets the surgery.

To the best of our knowledge, workouts only have an indirect effect upon breast tissue.

You can burn fat or you can build up your pectoral muscles, but boobs themselves don’t become more or less swole after your time on a rowing machine.

That’s why Pao didn’t need to go under the knife to get her washboard abs or her dynamite booty or her muscular thighs.

She got all of those with hard work — well, that and the genetic lottery that allows her hard work to pay off.

Paola Mayfield’s insane post-baby body is the product of knowledge, self-discipline, a lot of effort, and again, a fortunate set of genetic predispositions.

She’s a fitness model. She did that whole Maxim contest a couple of years ago.

She is an experienced professional model.

Pao is hot and she knows it and people’s wild accusations about how she got to be that way aren’t going to dampen her spirits in the slightest.

These theories are probably motivated by envy and disbelief, but people should accept that they’re built differently and get over it.

Since their gossiping won’t ruin Paola’s day, all that they’re doing is making themselves look like jerks.