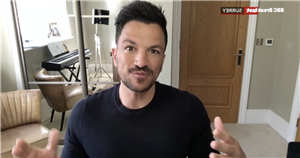 Peter Andre has treated fans to a rare snap of his youngest son Theo dressed up in the full costume from his favourite musical The Greatest Showman while he watches the much-loved film.

The four year old could be seen dressed in the full attire including his red festive tailcoat topped with gold detailing and matching black trousers with a red stripe down the side.

He even sported the oversized top hat worn in the film, copying Hugh Jackman as he performed the opening number from the 2017 show with his arms spread wide.

The Mysterious Girl singer captioned the sweet snap: “I love Theo,” with a love heart emoji. Fans were quick to send in their sweet messages to The Greatest Showman superfan as he follows in his father’s footsteps.

One user wrote: “Aww he’s too cute! Takes after his dad being the ‘Greatest Showman!!’”

Another agreed: “Peter he is so cute, I can tell he’s a right little character, from your you tube videos, I just love him.” A third added: “Aww that’s so sweet. He’s going to be an entertainer just like papa.”

This comes after the 90s singer shared a rare clip of his littlest enjoying his breakfast complete with his Greatest Showman top hat.

The proud dad, who filmed the video, can be heard behind the camera, asking: “How’s the breakfast, Theo?” He also shares two children Princess, 13, and Junior, 15, with his ex Katie Price, who has recently announced her engagement to Carl Woods.

A source told OK! Online that Peter, who divorced the former glamour model in 2009 after four years of marriage, gushed that their announcement was “great” news. They said: “Peter is really happy for Katie and Carl. He didn’t know that Katie was engaged, but he expected they may get engaged soon and he thinks it’s great.

“He thinks love is a beautiful thing, and you can’t ask for anything more.”

Katie announced her special news exclusively with OK!: “It’s refreshing to be with a man that if I decided I never wanted to work again, he’d look after me. I just love him.

“We’d spoken about it a lot, so I knew he was going to, I just didn’t know when. It was amazing.”