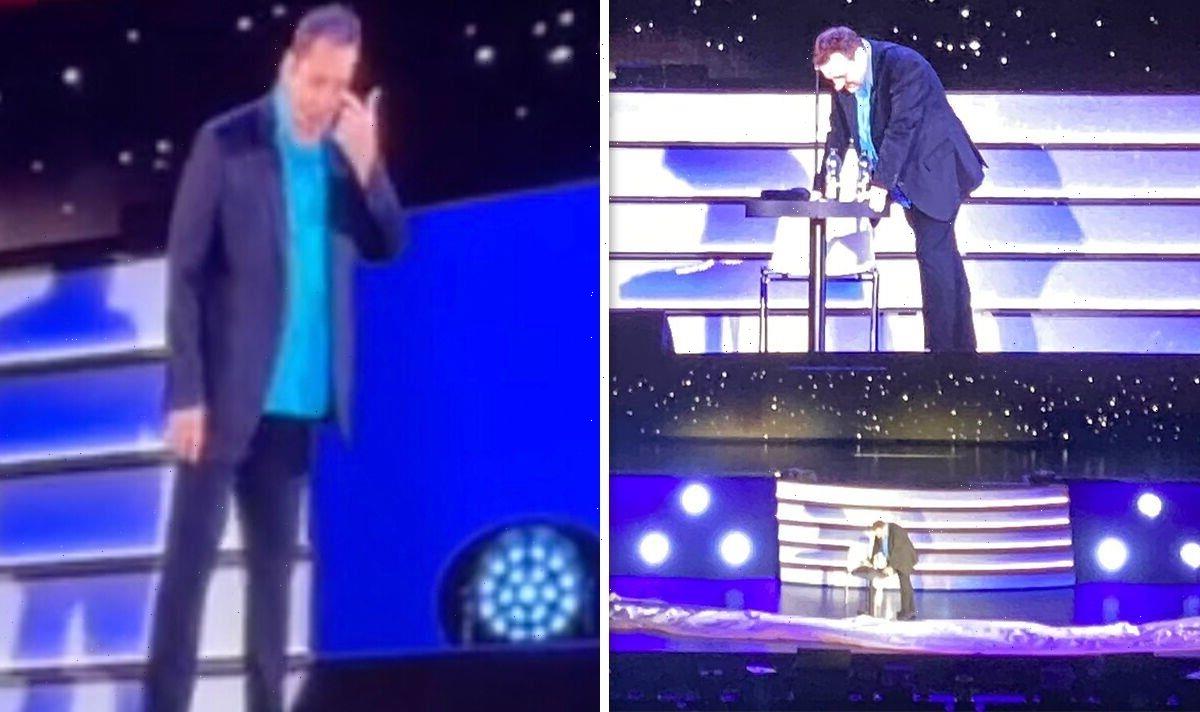 Peter Kay says he wanted to call tour ‘Peter Who?’

Comedian Peter Kay, 49, was left overwhelmed when he received a standing ovation at Manchester’s AO Arena on Friday night. The star was applauded by a sell-out crowd in Manchester, which is 16 miles from his hometown of Bolton.

Peter’s fans chanted his name as he took to the stage, causing him to break down in tears during the first show of his 110-day tour.

He could be seen wiping away tears with a tissue while the audience cheered him on.

The British comedy legend told the crowd: “Aw you’ll have me in bits.

“Lovely Manchester you made me cry.

“I can’t believe I cried, where did it come from all that emotion?”

It comes after Peter’s announcement that he would be returning to stand-up comedy sparked a frenzy last month.

His tour, named Better Late Than Never after the comic took an extended break from touring for the past 12 years, was instantly in high demand, as tickets sold out in record time.

Just before Peter arrived at his opening gig in Manchester last night, touts were re-selling the tickets for £155 per person to fans who were desperate to watch their favourite comedian’s comeback show.

Peter had attempted to make sure the tickets were at the lowest price they could be due to the cost of living crisis in the UK.

The TV star charged fans just £35 per ticket – the same cost as his last tour, which took place back in 2010.

Peter’s tour kicked off this month, and is scheduled to run until August 2023.

To the joy of his fans, Peter went on to announce a London residency at the O2 Arena.

It’s clear that despite his long absence from the stage, Peter’s shows are as much in demand as ever.

The comic’s last live stand-up tour in 2010 holds the Guinness World Record for the biggest-selling comedy tour of all time.

1.2 million people bought tickets to watch him perform at the time.

In November this year, Peter had to issue a statement telling fans to “please persevere” after the website assigned to release pre-sale tickets for his first gigs in ten years crashed within minutes of going live.

Posted on Peter’s Twitter account, which boasts 789,600 followers, a statement from SJM read: “We’d like to acknowledge and apologise for a number of technical issues our customers experienced while trying to buy tickets for Peter Kay’s upcoming live tour via the O2 priority pre-sale earlier today.

“SJM would like to reassure customers that substantial provision has been put in place for the main ticket on-sale this Saturday 12th at 10am.

“Plenty of tickets will be available throughout the day so please persevere and please buy from official ticket outlets listed on the attached link.”

Addressing the high demand for tickets on BBC Radio 2’s Zoe Ball Breakfast Show, Peter admitted it surprised him, telling the host: “You know what? I cannot get my head round it.

“I think we should have called this tour Peter Who because I hadn’t been around for five years.”