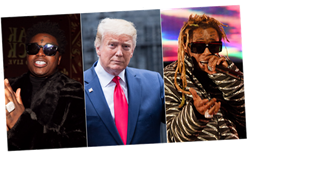 Lil Wayne and Kodak Black have been pardoned by President Donald Trump. The rappers were included in the final wave of pardons and commutations Trump granted on Tuesday, his last full day in office, according to a statement released by the White House.

Wayne pleaded guilty last month to illegally carrying a loaded handgun while traveling to Florida on a private plane in December 2019, according to CBS News.

Lil Wayne appeared to support Trump during his 2020 presidential campaign, as he tweeted a photo of himself with the president. He said he backed his criminal justice reform program and economic plan for African Americans.

He pleaded guilty in August 2019 to two counts of knowingly making a false and fictitious written statement in order to “unlawfully acquire firearms.”