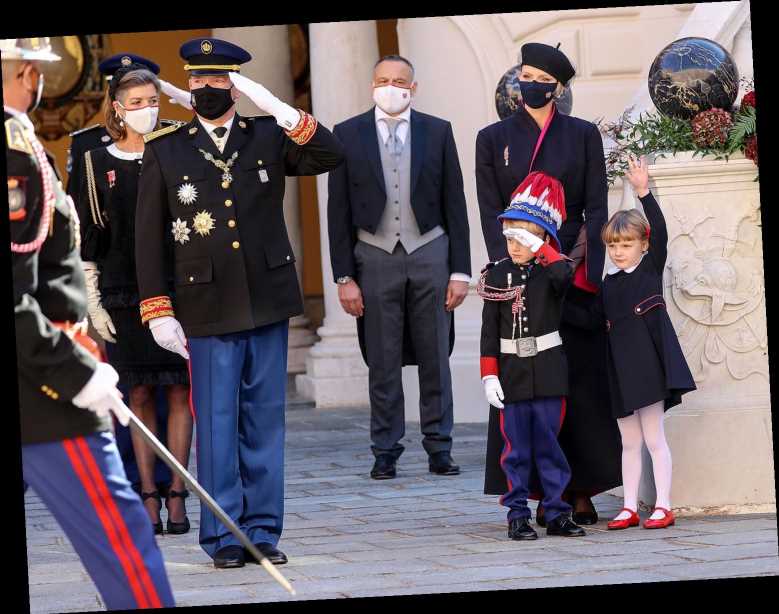 Monaco's National Day took place on Thursday without crowds, fireworks or the traditional balcony wave from the royal family due to the ongoing pandemic. Yet Monaco still produced one of its brightest, most enchanting celebrations ever.

For their first time as full participants in the palace courtyard ceremonies, Prince Albert and Princess Charlene's twins — Princess Gabriella and Prince Jacques, who turn 6 in two weeks — put on quite the display. From saluting passing guards, adjusting a plumed helmet and leaning into mom Charlene during their 20-minute long appearance, the royal twins brought the cuteness.

For the second year in a row, Prince Jacques wore his military uniform, including the Palace Guard's plumed helmet (a source of constant adjustment throughout the amended courtyard portion of the ceremonies. Shortly before the ceremonies began, his mother coached him once last time and as soon as the national anthem began, the young prince stood at attention.

Princess Gabriella, in a navy blue Jacardi coat dress with white Claudine collar, bright red Mary Janes and a matching ribbon in her hair, stole hearts just as easily. The grandchildren of Princess Grace share a theatrical strain and adorably steal cues from one another. When her brother saluted a passing rank of soldiers, Gabriella chose to wave them by and even took to dancing in place! The moment didn't go unnoticed. Hidden behind his mask, Prince Albert's smile was evident in his eyes! The annual ceremonies, which began in 1949, have never seen a year like this. Just 10 days ago, Prince Albert decreed the ceremonies would go forward despite the pandemic, though under numerous changes and restrictions. Some elements — the traditional evening concert and fireworks, for example — were canceled outright. Other events banned crowds, limited the number of invitees or were rescheduled, scattered out over a week-long calendar. A number of the annual medal presentation and elevations were handed out earlier in the week, outdoors, when possible, or in small private groups with attendees being tested and wearing masks.

RELATED: Prince Albert of Monaco's Daughter 'Grateful to Be Alive' After Coronavirus Diagnosis Albert's elder sister Princess Caroline was also in attendance at the morning mass alongside her children Andrea, Pierre and their wives, Tatianna and Beatrice, attended mass with Alexandra of Hanover.  Princess Stephanie was represented by her son Louis Ducruet and his wife Marie. With Prince Albert having fought the virus himself in March, Monaco experienced and recognized the severity of the virus early. While authorities believe a second wave has been averted, the past year has nonetheless been extremely challenging and a new medal honoring health care workers decoration was created with frontline health care workers being recognized during Thursday's courtyard ceremony.

In respect of its efforts, the Monagasque Red Cross was given a special honor, with Prince Albert symbolically pinning the high national decoration, the Order of the Grimaldis, on the organization's flagstaff during the ceremonies.

Equally deserving of medals were the twins. This was the first time for them to actually participate in the ceremonies (as opposed to performing a balcony wave) and — if occasionally fidgety — performing admirably, they did their parents and the principality proud.