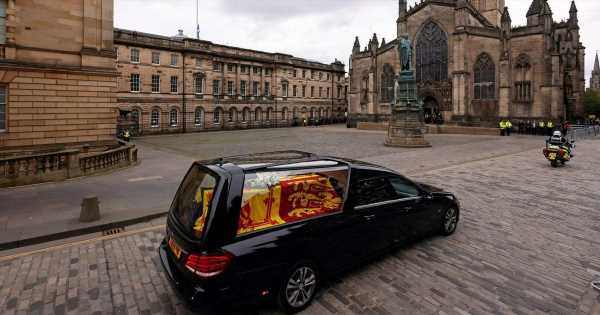 The hearse carrying the late Queen’s coffin departed her beloved Balmoral Castle yesterday (11 September) amid crowds of mourners and she began her final journey back to London, via Edinburgh.

Royal fans watching the procession noticed something rather odd about the hearse itself, as at the beginning of the drive, a large sticker bearing the name of William Purves, the undertaker chosen to transport the coffin, was visible on the vehicle's window.

The sticker obstructed part of the view of the coffin, which was draped with the Royal Standard of Scotland.

However at some point during the six hour journey the window sticker appears to have been removed, as it could not be seen upon the hearse’s arrival in Edinburgh.

Royal fans who spotted the sticker took to social media to discuss it, with one writing: "Is it right that the hearse carrying the Queen’s coffin has its advertising sticker on the window? Imho it should have been removed."

"It’s a huge shame the funeral directors felt the need to put window stickers on the hearse in such a prominent way. Shameful PR choice," added another.

However, a third argued it wasn't really that big a deal: "Who actually gives a f**k about a sticker, if it was truly inappropriate fair enough but it was the name of the funeral directors ffs, so many snowflakes out there offended by a business having its name on the hearse."

The car made at least one stop during the journey so it’s likely that the sticker was removed during one of these.

The funeral director’s website crashed as those watching the procession on TV rushed to the firm’s website.

Once it was back up and running, a post on the homepage read: “When you place your trust in William Purves you can expect the highest standards of professionalism, compassionate care and a truly distinct service.

One its journey the hearse was accompanied by the Queen’s daughter Anne, Princess Royal and Sir Tim Laurence.

For all of the latest updates, sign up for OK!'s Royal newsletter.

The hearse made the journey from Balmoral to the Palace of Holyroodhouse in Edinburgh, where the coffin remained in the throne room overnight.

Before the journey the coffin had been laid to rest in the Balmoral ballroom, allowing the late monarch’s loyal Balmoral estate workers to say their last goodbyes.

Balmoral was one of the Queen’s favourite homes, and she had a special love for the ballroom where she had attended many balls as a young princess.

And in her years as Queen she would still attend the Ghillies Ball, an annual dance that is held at Balmoral for the staff.

Somewhat fittingly the flowers for the wreath placed on the coffin, all came from the Balmoral estate.

The wreath was made up of sweet peas – one of the Queen’s favourite flowers – dahlias, phlox, white heather and pine fir.

Scottish First Minister Nicola Sturgeon said the “poignant” journey would give the public a chance to come together to “mark our country’s shared loss”.

Following the coffin’s arrival in Holyroodhouse it was placed in the throne room overnight, where it will depart later today (12 September).

This week, OK! celebrates the life of Her Majesty the Queen with a commemorative special in honour of Britain’s longest reigning monarch. Be sure to pick up your copy.