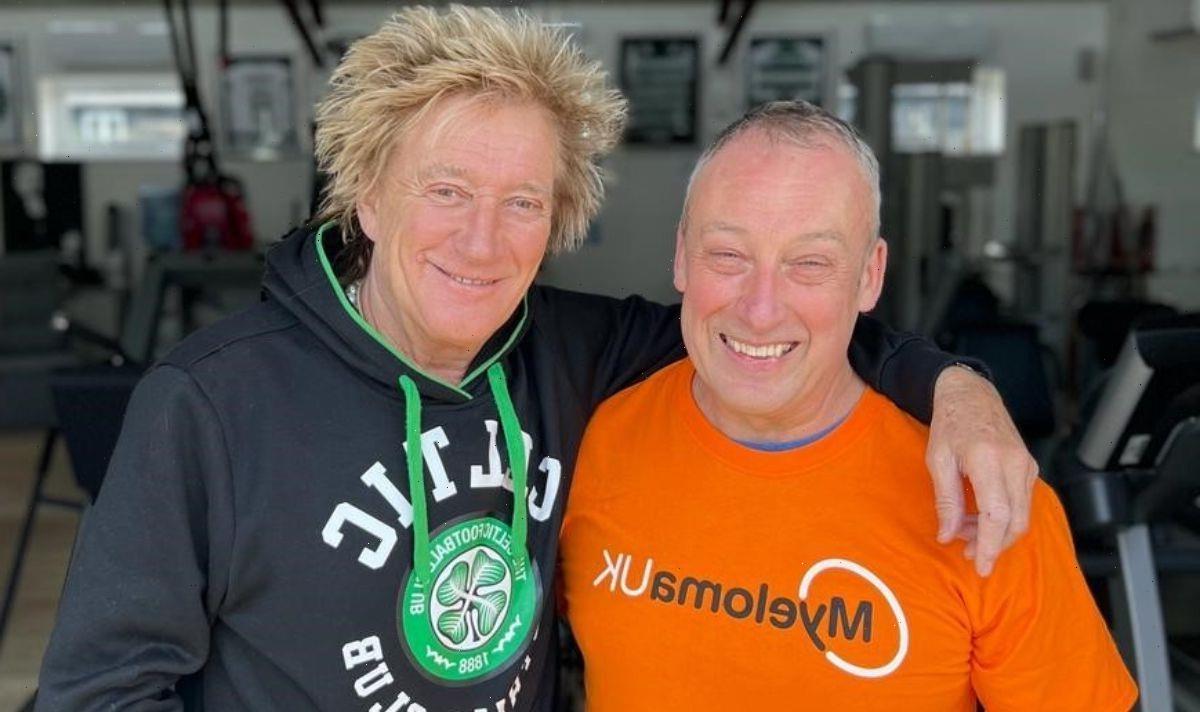 Speaking exclusively to Express.co.uk just before he embarked on a “lifechanging” challenge in Wales in support of Myeloma UK, Gary O’Connor, 63, recounted his years as Sir Rod Stewart’s personal trainer. The exercise enthusiast was an “ordinary fellow” when being “in the right place at the right time” saw him whisked away on a 23-year adventure.

Around 1999, Sir Rod Stewart, although not yet knighted at that time, was a global-recognised name and arguably at the peak of his career with houses across the globe and almost constant tours.

Although he mostly lived in Los Angeles, the musician would often return to his home in Essex, and continued with his intense personal training routine at the gym Gary was managing.

On one particular trip, Sir Rod’s usual American trainer wasn’t able to come, and Gary was asked to fill in, apparently doing such a good job that he became Sir Rod’s UK trainer, popping out to the star’s house on his lunch break to train him.

The pair built a relationship over time, as Gary explained being a personal trainer is much like “being a counsellor or hairdresser, the client comes to you with all their problems”.

Gary recalled Sir Rod one day asking him: “Do you want to take some of your holiday and come to Marbella in Spain with me to visit a friend. Would you come with and train me?”

While the trainer was incredibly keen, the dates coincided with his 40th birthday and his sister’s wedding, but the singer explained that was no problem and he would have Gary flown back to the UK, and then he could join the holiday again later.

Gary gushed: “You can imagine what it’s like, I’m this ordinary fellow from Epping being whisked out on a private jet to Marbella. Doing fitness training with him and having the rest of the time to myself.”

After the trip over, Gary believed life was back to normal until Sir Rod asked him to come to Los Angeles, just for as long as his annual leave allowed.

Gary accepted and enjoyed the “incredible experience”, believing it would be short-lived and he would return to his day job once he got back to the UK.

But then came the real proposal from the Maggie May singer: “He said: ‘What would it take to leave this job and come out on the road to be my tour trainer around the world?’

“It was a huge decision. I wasn’t exactly young, I was over 40 now. I thought if I do this, I’ll last 6 months, it’ll be an incredible experience and when I come back I can put my feet back on the ground and go off in a different direction.

“Somehow or another, it lasted for 23 years.”

Gary joined the singer, travelling across the world, eventually becoming his PA and an assistant tour manager over the years as well.

However, the trainer admits that two decades of being on the road meant he missed a lot of events and special moments, but he didn’t mind.

He continued: “It was such a huge rollercoaster, kaleidoscopic, firework-exploding experience for me it didn’t really matter. I was just like: ‘Oh my god I’m 40 years old and leading a life I never planned for’. I certainly realised how fortunate I was.”

Although the rockstar is almost 80 now, Gary says his training regime is no easy feat, explaining: “He still needs to be fit enough to complete three two-hour shows per week on tour for months on end which is a hard workout in itself.

“He’s a bit like Mick Jagger, the fittest of their age group in entertainment aren’t they.”

Even after all these years with Sir Rod, Gary “dissociates” himself from the result of his work when he sees how fit the rockstar is at 78, joking: “He doesn’t exercise like a typical 78-year-old that’s for sure.”

The close dynamic between Gary and Sir Rod is evident, as the musician fully supported his trainer as he took on the grueling Fan Dance SAS challenge over the weekend in support of a charity helping to find a cure for his sister’s blood cancer diagnosis.

Gary revealed that Sir Rod has personally donated to the cause, and the day before the challenge, the rocker made a special appearance: “He’s even run by me this morning and wished me well.

“I’ve been training him for a long long time and I’ve never done anything of this nature before, so it’s all a bit of ‘Wow, Gary’s doing this?’.”

On Saturday, January 21, Gary embarked on the route used for SAS selection on Pen y Fan mountain in South Wales, completing the “arduous” 24 kilometre hike in 6 hours and 27 minutes, raising £3,370 for Myeloma UK.

He decided to embark on the challenge in honour of his sister Jan Jenner, who was diagnosed with the incurable blood cancer Myeloma in 2012.

During her initial diagnosis, Jan underwent a transplant that “levelled” the cancer, but now it has “started back up again”.

Gary admitted: “I was hesitant to start with, bringing in (Sir Rod), because I’m the original Gray Man that kind of stays in the background but I thought not this is really important and it isn’t about me, it isn’t about him.

“At the end of the day, it’s about raising awareness for this organisation. The funding that I’ve raised for it goes towards research which hopefully one day will find a cure.”