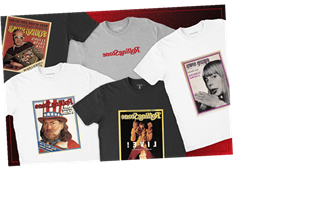 Fans can now add a little piece of music history to their wardrobes: Rolling Stone has launched the Rolling Stone Shop with two exclusive collections inspired by Rolling Stone through the decades.

The first line featured on The Shop will include The Covers Collection, featuring T-shirts with iconic covers of Elton John, Willie Nelson, Janis Joplin, Joni Mitchell and Jimi Hendrix.

“We’re excited to bring our iconic covers and logo to this apparel line in partnership with some incredible artists and photographers” says Rolling Stone President and COO Gus Wenner. “Each cover of Rolling Stone is a time capsule that reflects a powerful moment in culture; and each item will give people a piece of musical and cultural history to have in their closets.”

The Logo Collection, the second line featured on the shop, is a capsule of T-shirts and hoodies showcasing Rolling Stone’s iconic logo and its evolution from 1967 to 1981 to today.

Rolling Stone’s logo started with a sketch. In 1967, prominent poster artist Rick Griffin casually sketched Rolling Stone’s first logo. Fourteen years later, the logo evolved and became the symbol of all things music, politics, and pop culture. Hand drawn in 1981, what became Rolling Stone’s most famous logo incorporated a signature bold shadow that graced over 400 distinctive covers until 2018. And most recently, as part of a brand redesign, Rolling Stone reimagined the 1981 logo to develop its current features, aligning the aesthetic with the attitude and values of the 21st Century.