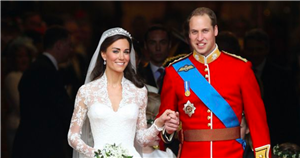 Billions tuned in to watch Prince William wed Kate Middleton wed at Westminster Abbey back in 2011.

Now, as the couple mark ten years as husband and wife, Royal experts have shared how the Duke of Cambridge will mark the special occasion.

William, 38, is said to have a “sweet side” to him, and Kate, 39, is bound to feel treated like a princess on their special day.

Royal expert Katie Nicholl exclusively told OK!: "I don't know if he'd admit to it but deep down William is a bit of a romantic.

"They do have a favourite Italian restaurant in Kensington just a stone's throw from the palace, and William has been known to treat Kate to a romantic meal there.

"But it's very hard for them to go anywhere undercover.”

Katie went on to share: "There's a sweet side to William, so I'm sure there will be a card and a thoughtful present for Kate, and perhaps a quiet dinner at home."

It isn’t the first time William has shown his romantic side to Kate, as he has given her many thoughtful gifts in the past, including his mother, Princess Diana’s engagement ring.

William gave his wife a number of gifts this year, including a pair of diamond and sapphire earrings, which the Duchess “loves.”

When the Duchess of Cambridge turned 39 in January, William, Prince George, Princess Charlotte and Prince Louis threw her a tea party at the family’s Norfolk country home, Anmer Hall.

The dad of three also gave Kate a pair of matching sapphire and diamond earrings around the time of their wedding in 2011.

The mum of three had debuted the gorgeous jewellery on her tour of Canada, and has worn them for many occasions over the years.

It comes after the couple were seen in public for the first time since the funeral of William's grandfather Prince Philip to pay a tribute to the late Duke of Edinburgh.

William and Kate joined other members of the Royal family, including Prince Harry, to celebrate the life of the 99-year-old, who passed away on 9 April.

The pair stepped out on The Queen's 95th birthday as they visited the Air Cadets in East London as he said Philip would want them to "get on with the job".