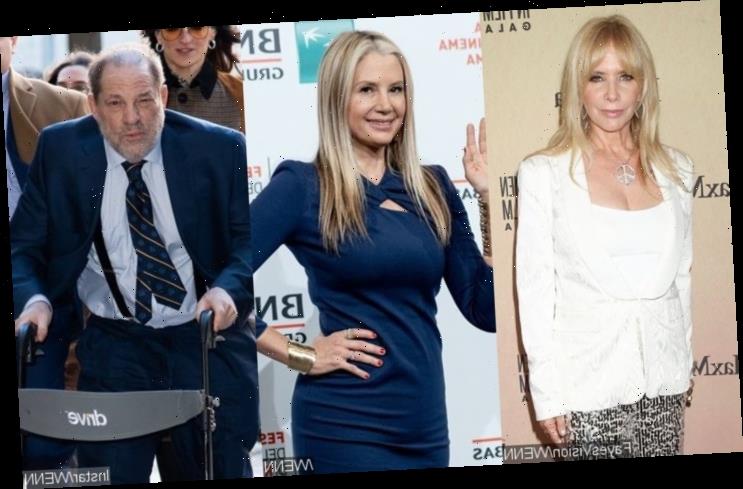 Also taking to social media in celebration of the sentencing is fellow actress Ellen Barkin who thanks journalist Ronan Farrow, the accusers, the judge and the jury for ‘changing the future for us all.’

AceShowbiz –Rosanna Arquette and Mira Sorvino are among the Hollywood stars celebrating following the news disgraced movie mogul Harvey Weinstein has been sentenced to serve 23 years behind bars.

The two actresses, who were among the army of women accusing the producer of sexual misconduct and harassment, jumped on Twitter minutes after the sentencing was announced.

Mira, who accused Weinstein of harassment, revealed she sobbed when she heard the producer had been handed a stiff prison sentence after a New York jury found him guilty of rape and a non-consensual sexual act.

She wrote, “Harvey Weinstein has been sentenced to 23 years in prison for his crimes of rape and sexual assault. I literally cried tears of amazement, gratitude that the justice system has worked on behalf of all of his victims today.”

Meanwhile, Arquette heaped praise on her fellow “silence breakers” – the group of women who first came forward to expose Weinstein in 2017.

“Gratitude to all the silence breakers especially Rose (McGowan) and all survivors of weinstein to the brave women who testified and to the incredible investigative reporting of Ronan Farrow who uncovered the sabotage and spying and to David Remnick thank you Rich McKuen and ny times (sic).”

The Silence Breakers themselves issued a statement, which read, “Harvey Weinstein’s legacy will always be that he’s a convicted rapist. He is going to jail – but no amount of jail time will repair the lives he ruined, the careers he destroyed, or the damage he has caused.”

“The Silence Breaker community was founded on solidarity, support, and compassion. The New York trial has ended, but the Silence Breakers will persist in our crusade for cultural change, justice and to have our voices heard.”

Meanwhile, Arquette also lashed out at remarks made by one of Weinstein’s attorneys, Donna Rotunno, who called her client’s sentence “obscene”, adding, “There are murderers who will get out… faster than Harvey Weinstein will.”

Arquette wrote, “Please Shut up Donna Rotunno, the only obscene and obnoxious person here is you. He got what he deserved because he’s a rapist. he is in prison because he raped SO MANY MORE WOMEN and ruined lives and careers there is more evidence and one woman was 16 at the time.”

And Ellen Barkin, who claims she was a victim of Weinstein’s verbal abuse, also took to Twitter to comment on the producer’s jail sentencing, adding, “23 years. God bless you, (accusers) Jessica Mann, Mimi Hayley and all 108 survivors for your courage and fight. Thank you Ronan Farrow. Thank you Judge Burke. Thank you to the jury. Thank you for believing survivors. Thank you for changing the future for us all.”

Farrow was one of the journalists who broke the news about the full extent of Weinstein’s behaviour and misconduct in a New Yorker article.

One of the two New York Times reporters who broke the Weinstein story, Jodi Kantor, was actually in the courtroom for the sentencing.

She wrote, “23 years for Harvey Weinstein… Weinstein was cuffed to his wheelchair then rolled away. The women who testified sobbed afterwards. Irwin Reiter, his accountant of 30 yrs, who secretly helped us break the story, sat just behind.”