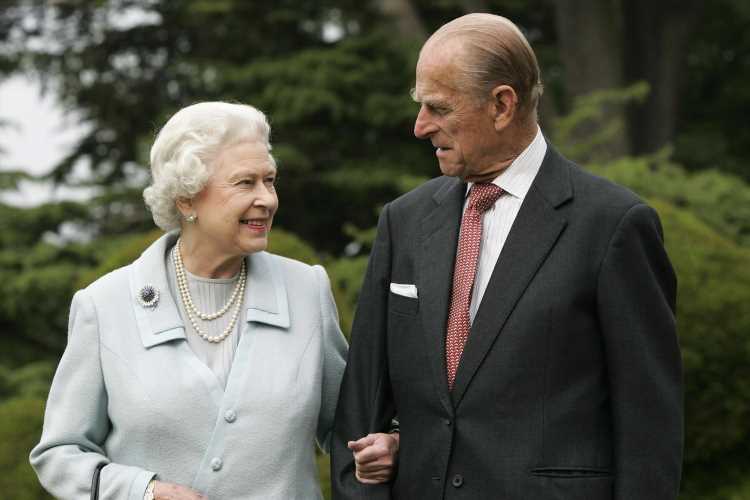 The Royal Family honored Prince Philip on Saturday by sharing a quote from Queen Elizabeth's anniversary speech to him in 1997, one day after the Duke of Edinburgh "passed away peacefully" at Windsor Castle.

"He has, quite simply, been my strength and stay all these years, and I, and his whole family, and this and many other countries, owe him a debt greater than he would ever claim, or we shall ever know," the Queen said of her husband in the speech marking their 50th anniversary.

Alongside the touching quote, the Royal Family shared a sweet photo of the couple from about five years ago and some more information about the late duke.

"At The Queen's Coronation in 1953, The Duke of Edinburgh swore to be Her Majesty's 'liege man of life and limb,'" the caption said. "The Duke was a devoted consort (companion to the Sovereign) for almost 70 years, from Her Majesty's Accession in 1952 until his death."

News of Philip's death at age 99 was announced on Friday in a statement from the palace.

"It is with deep sorrow that Her Majesty The Queen has announced the death of her beloved husband, His Royal Highness The Prince Philip, Duke of Edinburgh," the statement said. "The Royal Family join with people around the world in mourning his loss."

Listen below to the episode of our daily podcast PEOPLE Every Day where we are looking back at Prince Philip's life and legacy.

Charles Anson, former press secretary to the Queen, told PEOPLE on Friday that the 94-year-old monarch was prepared for Philip's death after years of health troubles.

"She would have thought about this moment several times, and her way would be to remain as steady and as calm as possible," Anson said. "That comes naturally to her through her temperament and her experience."

"In my years of working for her she was always calm, no matter what was going on," he added. "But for any human being, this is a very cathartic moment." Anson said the Queen will be surrounded by the close members of her private household in the coming days.

"She has an enormous amount of family support for her and will also take comfort from the enormity of the support from all over the world," he said.

"I particularly wanted to say that my father, for I suppose the last 70 years, has given the most remarkable, devoted service to The Queen, to my family and to the country, but also to the whole of the Commonwealth," the Prince of Wales, 72, said in the message.

"As you can imagine, my family and I miss my father enormously. He was a much loved and appreciated figure and apart from anything else, I can imagine, he would be so deeply touched by the number of other people here and elsewhere around the world and the Commonwealth, who also I think, share our loss and our sorrow," Charles said.

Also on Saturday, the Queen's daughter-in-law Sophie, Countess of Wessex gave an update on how the monarch was coping when she and her husband Prince Edward, the Queen's youngest child with the Duke of Edinburgh, paid a visit to Windsor Castle.

As they left, Sophie, 56, tearfully told Sky News correspondent Rhiannon Mills that "the Queen has been amazing."