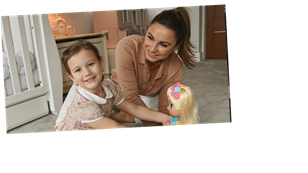 Sam Faiers has revealed she’s chosen not to send daughter Rosie for another year.

The Mummy Diaries star, 29, candidly opened up about her decision during a question and answer session on her Instagram stories.

Mum of two Sam was asked by a fan: “Is Rosie going to start nursery?”

As she shared an adorable snap of her three year old daughter at her recent Moana-themed birthday party, Sam revealed she had decided not to send her to nursery in the meantime.

Sam told her 2.5million followers: “Originally we was going to.. but I’ve decided I’m going to keep her home for now. Maybe next September? I’m just not sure yet.”

Sam, who recently sparked engagement rumours with Paul Knightley, continued: “I feel they’re only little for such a short time” followed by a smiling face emoji.

She added: “Mainly because we can actually manage having her home with us with our flexible work & filming schedule.. it’s whatever works for you as a family I guess.”

Former The Only Way Is Essex star Sam also shared plans for her and boyfriend Paul, 30, to expand their brood.

After being asked by another fan if she wanted another baby, she said: “Yes yes yes!

Sam had shared a sweet photo of herself when she was pregnant with her first son Paul. The snap shows her dressed in a red and white striped onesie while Paul hugs her and her bump from behind.

Speaking about the photo, she added: “How funny the pic we took was the night before I went into labour with little Paul..

Sam previously said she would put Rosie in nursery once she reached three in an episode of The Mummy Diaries.

Speaking alongside boyfriend Paul, Sam explained: “People that know us know that we've never been ones to send our kids to nursery, and look, I'm not against nursery at all, but when she is three I would definitely be looking to put her [Rosie] into a nursery.

“Or even the preschool where little Paul goes because she's just got so much energy. She's just going to be climbing the walls every day.”

Steven Spielberg's daughter Mikeala on why she likes sex work