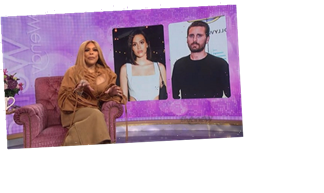 One is a teenager, the other is 18 years her senior. And Wendy Williams, like so many, is plain old disgusted.

The planets have clearly aligned, because this is one of those rare instances when we catch ourselves agreeing with Wendy Williams.

“Scott may have a new fling,” Wendy begins, sharing: “I don’t approve.”

“Scott, here you go again,” she says. “Kourtney, come get your man — your baby father or whatever.”

“Over the weekend,” Wendy explains to her audience, “he had dinner with Lisa Rinna’s 19-year-old daughter Amelia Hamlin.”

“Do you understand what’s going on here?” Wendy asks her viewers, a reference to Scott’s apparent passion for 19-year-old models.

“They had dinner together,” Wendy continues, referring to how they both shared photos from the same meal.

“And then last week,” she recalls, “they went to Kendall’s birthday party together.”

The party, which of course should not have happened at all as COVID-19 ravages our nation, was their debut as an apparent couple.

“Cute, right?” Wendy baits her audience while acknowledging that Amelia is beautiful.

“But to be out with a grown man, father of three, and a nagging baby’s mother,” Wendy points out, “and Hot Topics judging.”

“This is the deal,” Wendy opines. “A guy that old shouldn’t even be friends with a girl that young.”

“And,” she continues, “I don’t care that you run in the same circles and you know a lot of the same people.”

“Are they involved, involved?” she asks, answering: “Well, two dates say to me.”

Wendy then asserts: “There’s something going on.”

“And I would hope that her father, Harry Hamlin, would step in and have some sort of control over her,” Wendy expresses.

“And Lisa Rinna,” she continues, “I’m on the fence whether you like this or not.”

Wendy explains her uncertainty: “’cause I know you love a show.”

Wendy says that, to Lisa, it’s “like you’re in with the first family… and you’re going places and you’re modeling and you’re doing things.”

Wendy may be going a little strong when she says that their age gap means that they couldn’t be friends.

Plenty of adults make platonic friendships despite age gaps if they share interests.

Many of us do this over social media — only to feel as if we have been personally attacked when a friend’s tweet makes us feel old. It happens.

We also don’t think that the message that Harry Hamlin should “control” his adult daughter’s dating life is the right path, here.

Amelia is doing nothing wrong. If they are dating, it is Scott who is being the much-older creep in this scenario, so he’s the one who needs a talking-to.

If Scott keeps boning 19-year-old hotties from celebrity dynasties, their famous parents could end up forming a small army of his enemies. Seriously, he needs to be less sleazy.