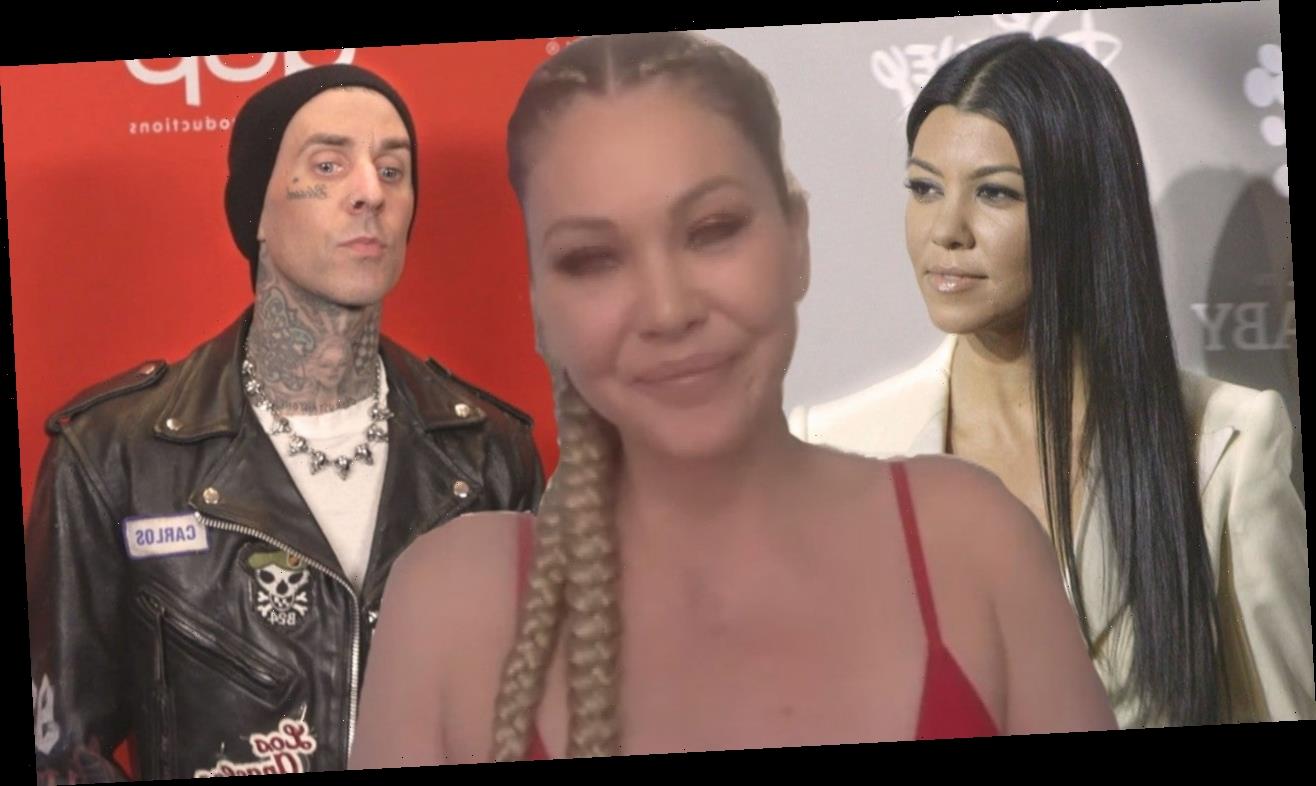 Shanna Moakler has no “ill will” towards Kourtney Kardashian amid her new relationship with Travis Barker. The Miss Nevada and Miss Utah USA pageant executive producer is setting the record straight after accusations that she threw shade and started a social media war against her ex-husband’s new girlfriend.

“I honestly had no bad intentions whatsoever. Travis and I haven’t been together for almost a decade. We co-parent, we’re friends. However, I don’t know anything about his personal life like that,” Moakler told ET’s Deidre Behar. “We’re not as close like that anymore. It’s been 10 years. He has his own world going on, and I have my own world. Do I want him to be happy? Absolutely. I want him to be happy and if she makes him happy, I think that’s awesome.”

Moakler insisted her social media activity has nothing to do with Kardashian — and added that if she had a message to share, she’d say it directly. Moakler made headlines after hitting like on an Instagram comment that dissed the reality star.

“Sadly, I guess that I liked a comment on social media. I honestly don’t remember liking that comment. Sometimes when I’m on my social media, I’ll like all the fans’ comments, I just kinda go down and like everything,” she explained. “And I guess I liked a comment that was disparaging. When I saw the headlines, I was like, ‘What is this?’ I had to go back and look at it. I didn’t even realize people were looking at things I hearted. I was trying to be supportive of my fan base and didn’t even realize it. I will from now on.”

As for people thinking she was throwing shade, Moakler said she doesn’t take social media seriously. Noting that she posts silly quotes and things she thinks “women will relate to,” Moakler said “it’s all in good fun for me.”

“If I wanted to say something, I think the world knows me as being outgoing enough if I really wanted to make a comment, I would just make a comment,” she added. “I wouldn’t be doing these, I guess, cryptic messages to the world.”

She also touched on posting a photo of roses after the Blink-182 drummer gifted Kardashian flowers, explaining how she was out with her boyfriend, Matthew Rondeau, and ran into a woman who she knew that sells roses.

“I have known [this woman] since I was 19 years old…She was so excited to see me and she gave me all these roses and I posted it because I was so happy to see her,” Moakler recalled. “And people thought, ‘Oh, because he gave her flowers, I was posting flowers.’ And it’s just silly to me. That was the kind of thing where people are putting things together that really had absolutely no correlation together at all.”

Moakler, on her end, has not met Kardashian but only wishes her and Barker happiness and “a long-lasting relationship.” “As long as she’s good to my children, this is the the biggest point that I keep saying,” she relayed. “And my kids like her. That’s all I care about. My kids are happy. They’re happy. I have my my own things going on and and and I think it’s great. I wish them all the best.”

“I know she’s giving them a lot of gifts as well, that I know that they love and appreciate,” she added. “As much as Travis and I may have not agreed in the past on a lot of things and we had our own public ups and downs, we’ve always shared the fact that our children are our first priority.”

Asked if she would let her children participate in any new Hulu reality show that Kardashian may be involved with her family’s new deal now that filming for Keeping Up With the Kardashians has come to an end, Moakler said, “If my kids wanted to participate, I’m all for it,” adding, “That’s something that Travis and I, as legal guardians, would have to come together and talk about. But if they would want to be on it, I’m absolutely OK with that.”

“We haven’t spoke or reached out to each other, and I don’t really think it’s my place or nor should she have to do,” Moakler said. “Like I said, I haven’t been with my ex-husband for over a decade… I don’t think it’s really any of my business what’s going on in his personal life…I don’t want him in my personal life [laughs].”

“I hope they have a long-lasting and fulfilling relationship. I want to see the father of my children happy,” she praised. “It’s only going to make him a better dad. And I’m in a good place and I hope they would like to see me happy so that I can be the best mother that I can possibly be as well… But don’t read so much into social media, people. It’s not that deep and it’s supposed to be fun.”

Moakler, on her end, couldn’t be happier with her model-actor beau. She and Rondeau met on Instagram and have been dating for about a year.

“I’m super happy. I’m just in a really good place. Work is fantastic and my relationship has been wonderful and I’m just having fun. I’m just enjoying myself,” she expressed, before sharing details of her relationship. “I went to his Instagram and followed him, but then he was like, ‘Hey, what’s up?’…And it kind of went from there. The rest is history.”

“We definitely use the L-word and we’re quarantine buddies. It started off as just quarantine buddies and it kind of spiraled into a relationship,” she explained. “It’s interesting dating in quarantine because you’re kind of thrusted into living like a married couple almost and you’re together 24/7, and you can’t go out to dinners and stuff. But we had an awesome summer and an awesome quarantine together.”

Fulfilled with her relationship, Moakler noted that she could definitely see herself getting married again in the future. However, she said she is “in no rush.”

“I think it’s really important to not ever let one of your past relationships make you afraid to fall in love again,” she stated. “I would walk down that aisle again, for sure. I think it would be beautiful, but I’m in no rush. If it happens, it happens. If it doesn’t, it’s OK. I’m just trying to [get through] this pandemic, just live my best life and spend time with my kids and focus on my work and just enjoy where I’m at in this place in my life.”

Moakler has many exciting things blossoming in her professional life. The former Miss USA also dished on her work as the executive producer of the Miss Nevada USA and Miss Utah USA pageants, and revealed that she’s working on a bikini collection and a health and wellness product line.

“I have my pageants coming up in June and August for Miss Nevada USA and Utah USA. I’m planning those productions,” she teased. “I’m creating a bikini line that’s going to be coming out in the next six months, and I’ve been working with David Allen Nutrition and we’re creating a wellness line.”

Last year, Moakler also opened up to ET about her major body transformation and how she lost almost 35 pounds after being at her heaviest. At the time, she gained 40 pounds and was almost at 170, before shedding the weight and getting down to 135.

“I had a pretty incredible weight loss journey and I’m really proud of my results and where I’m at,” Moakler told ET. “And I would love to share with other women how I did it and how they can do it because it’s completely possible.”