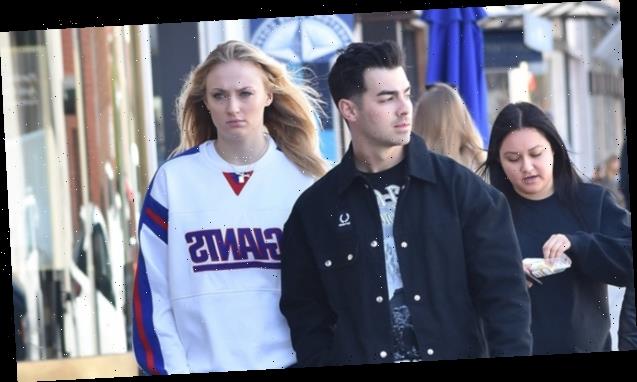 Sophie Turner is continuing to wear baggy clothes amidst reports that she’s pregnant. This time she went shopping in an oversized sweatshirt and track pants that hid her belly completely.

Sophie Turner used to love showing off her long, lean figure in body hugging jeans and t-shirts. But ever since reports surfaced in mid-February that she’s expecting her first child with husband Joe Jonas, 30, her wardrobe has changed. The 24-year-old has been wearing baggy, loose clothes, and continued with that look on March 2. She made it clear who her favorite football team is, sporting an oversized white New York Giants sweatshirt and blue matching track pants. The look completely hid her body, especially her mid-section. She wore her long blonde hair down and flowing, and had light eye makeup on and a pink lip to go with her casual outfit.

Sophie and Joe were photographed out and about in L.A. and headed to a children’s store. So is that a hint that a baby Turner-Jonas is on the way? The couple have not commented on the pregnancy reports and have just gone about living their everyday lives. They also haven’t gone into hiding, and are photographed on a near-daily basis. But they’re keeping fans guessing on whether or not Sophie is pregnant with her baggy wardrobe choices.

On Feb. 27, Sophie was photographed wearing a loose, baby-doll dress that completely hid her belly. She even used her white purse to cover her stomach from the paparazzi lenses. The following day, the actress and her hubby went on a smoothie run, and Sophie donned loose-fitting denim overalls. On Feb. 29, she showed off her long, lean legs in black leggings while walking her dog, but wore a loose black t-shirt that covered her mid-section.

A baby would be an amazing way to kick off 2020 for the couple, because 2019 will be hard to top. Sophie’s Sansa Stark became the Queen of the North on the series finale of Game of Thrones. Meanwhile, Joe and his brothers got back together, making the Jonas Brothers a top musical act years after their heyday. Then the couple had not one, but two weddings!

They stunned fans when they headed to Las Vegas’ Little White Wedding Chapel following the May 2, 2019 AMAs, and were married by an Elvis impersonator. Since so many music artists were in town for the awards, Dan+Shay sang Sophie down the aisle to their smash “Speechless,” while Diplo shared the event via his Instagram live. The couple had a formal wedding for family and friends with a romantic ceremony and reception at Château de Torreau in Sarrians in southern France on Saturday, June 29, 2019.