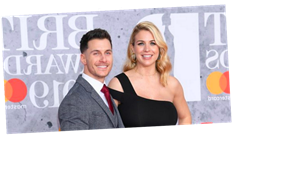 Gorka Marquez has opened up on plans for his dream wedding with Gemma Atkinson.

Since announcing the happy news of their engagement, the couple have remained tight-lipped on their wedding plans.

But, now Gorka has unveiled the plans he and wife-to-be Gemma, who was recently spotted flaunting her gorgeous engagement ring, have in store for their big day.

As Gorka appeared on Channel 4 show Steph’s Packed Lunch on Monday 22 March, the professional dancer revealed he and Gemma, who shared the adorable engagement gift she got from daughter Mia, hope for a big affair for their special day.

He said: “In my head, I had it planned maybe for next year, but we don't really know. We’re happy like we are right now.

“We want to make the wedding for all the family and friends.”

Gorka also revealed how he had originally planned to pop the question on their anniversary, which is a week before Valentine’s Day, but changed his mind due to lockdown.

The dancer explained: “I had it planned a week earlier…

“I had a surprise for the anniversary but obviously with covid and everything … so I postponed it a week and it was on Valentine’s Day.

“It was good, I think it worked in my favour.”

The TV star cooked a Spanish tortilla as he chatted on the Channel 4 show and explained how it is one of Gemma’s favourite dishes.

He admitted he was less than impressed when she recently came home with a shop-bought one.

“‘So that means you don’t like my one…’ I felt like she was cheating on me a little bit!”

Gemma and Gorka first met when the actress competed on Strictly Come Dancing in 2017.

The pair did not start dating until after Strictly ended and confirmed their romance in February 2018.

Loved-up Strictly couple Gemma and Gorka then went on to welcome daughter Mia together in July 2019.

Gemma and Gorka announced their engagement on Valentine’s Day in 2021 as she posted a selfie of her and Gorka to show off her stunning diamond ring while she kisses her future husband on her Instagram.

She wrote in the caption: “Valentine’s forever… Of course I said yes” alongside a red heart emoji.