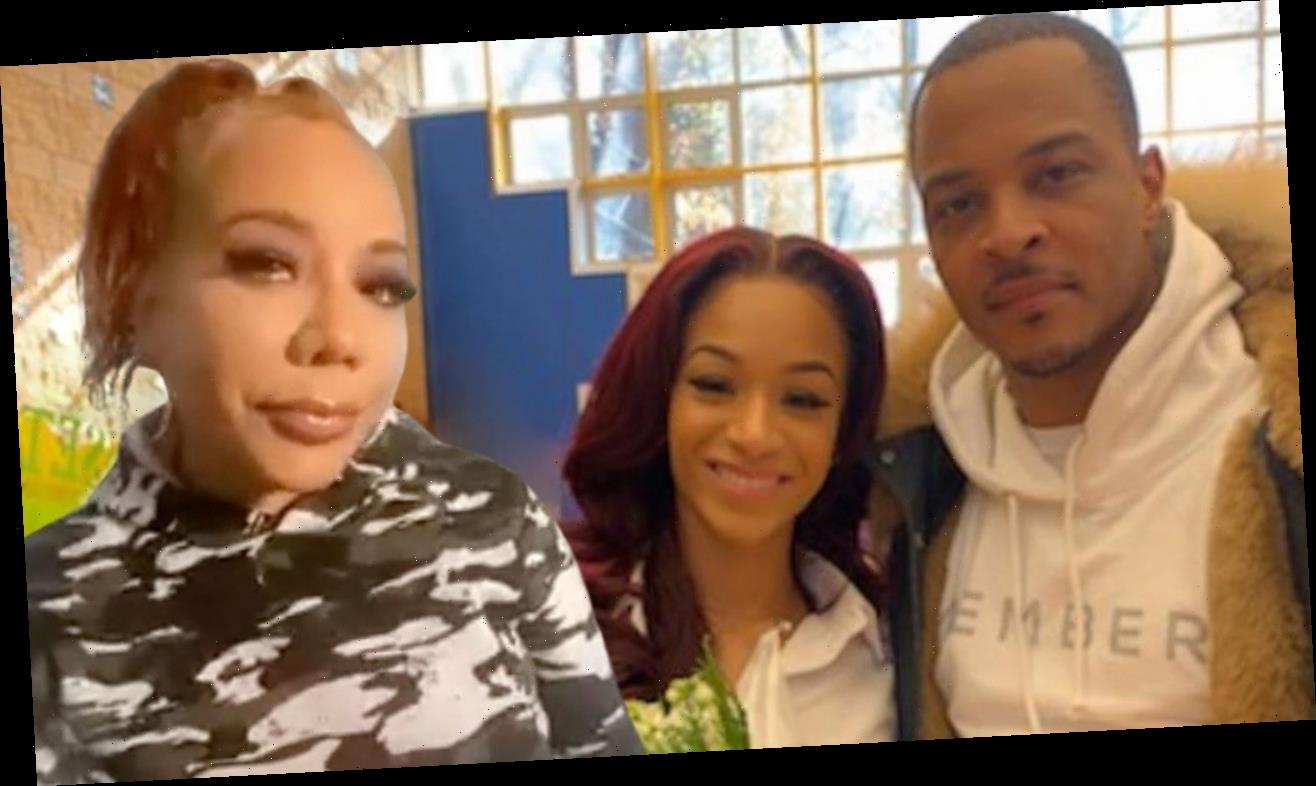 Tameka “Tiny” Harris always keeps it real, especially when it comes to her family!

In an exclusive new interview with ET, the 45-year-old The Mix executive producer opens up about how her husband, rapper T.I., has changed since making headlines for the comments he made about his daughter Deyjah’s virginity last year. During a since-deleted November 2019 episode of the Ladies Like Us podcast, T.I. said at the time that he escorted Deyjah on “yearly trips to the gynecologist” in order to “check her hymen” and ensure she’s still a virgin.

“He’s just being a little more understanding,” Tiny explains to ET’s Deidre Behar. “It was just him being too honest and sharing too much. And really, what’s the problem for Deyjah? Not any other real issues, like, she knows that she’s loved to no end.”

“He also spoke to her, apologized to her and was very sincere about it. He felt like he didn’t really owe anybody an apology as much as he did her,” she continues. “As long as she was perceptive and she understood and was forgiving, he was OK with that. He knew that the rest of the world didn’t accept it and wasn’t on his side. They were very angry, but the only thing he really cares about is what she feels.”

According to Tiny, T.I. has been more understanding of what Deyjah, now 19, “really wants to do.”

“They’re definitely in a good place … everything is going great,” Tiny explains. “They are trying to come up with things she really wants to get into, things she loves. He’s just trying to help her create that Deyjah thing.”

“He’s all into whatever she wants to do, ‘Whatever you wanna do, babe. OK, so let’s talk about this. How can we do it?’ He stays, he’s not letting up,” she continues. “He’ll call her and say, ‘OK, so you say you was gonna have this for me, I’m still waiting on it. I need a business plan, I need this.’ So he’s being very open to trying to hear her out, and understand her from a young teenager outlook.”

Tiny also gets candid on what it’s been like being married to T.I. for a decade. The two celebrated their 10th wedding anniversary in July.

“At two years in, I was like, ‘I don’t think I’m gonna make it to three,'” she admits. “My second year was really, really rough, and then we got to the third year and it got a little better, but it got a little rough again. I was like, ‘I just don’t see it.’ So to see myself here at 10, it is a major accomplishment for us both.”

“We’ve just been through the ups and downs, and you know how you sometimes fall in and out of love? We’ve done all of that, but we’ve been able to come back much stronger as a unit,” she continues. “I think it’s all because we really have a genuine love and desire, and we actually are very attracted to one another, sexually. I think that’s what keep us drawn to each other.”

Tiny says that she and T.I. actually wanted to do a 10-year renewal, but plans changed due to the coronavirus pandemic.

“That got kind of shattered with COVID-19 and everything, but I still plan to do that because we want to remarry each other,” she shares.

Zonnique Talks Pregnancy, Marriage and How T.I. Has Changed After Virginity Comments (Exclusive)

Zonnique Talks Pregnancy, Marriage and How T.I. Has Changed After Virginity Comments (Exclusive)

As for Tiny’s next milestone? Becoming a grandmother, as her 24-year-old daughter, Zonnique Pullins, is pregnant. Tiny tells ET that while she does support Zonnique’s relationship with boyfriend Bandhunta Izzy, she isn’t pressuring them to get married.

“It’s pretty awesome right now because at this point I’m really ready to see my grandchild and to feel this grandma love that I’m supposed to be getting,” she gushes. “I’m just ready to see her in mommy mode because I feel like she’s going to be an awesome mom.”

“[Izzy’s] a good guy. You know, treats her well, and as long as she’s happy,” she adds. “If she’s ready to get married, I’m all for it, [but] I wouldn’t rush her into getting married just for the sake of saying, ‘I’m married.’ I want them to be ready because marriage puts a lot of strain on a relationship.”

Earlier in the interview, Tiny also opens up about her new role as executive producer for The Mix talk show, which airs Tuesdays at 7 p.m. PT / 10 p.m. ET on Fox Soul.

Of how the new gig came to be, Tiny says, “I was sitting around with Zonnique and Reginae [Carter] and just listening to how they had so many views and conversations about different things.”

“And I felt like this is a show, this is something that people need to hear. There needs to be a platform for where they can speak their mind, speak their truth and be heard,” she adds. “We want to talk about everything. Whether its politics, sex, relationships, abuse, drugs. I mean, you name it. …We need to be able to speak on all topics so we can speak to those who need to be spoken to.”

For more on Tiny and her family, watch the video below.