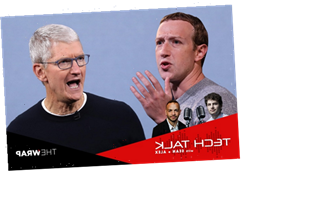 YouTube Edged Out Other Tech Giants With Biggest Gains During Pandemic

The long-simmering feud between Apple and Facebook is heating up once again.

If you missed it, Apple CEO Tim Cook told The New York Times on Monday his company is set to rollout a new feature that will ask users for their consent before apps are allowed to track their data across other apps. The new feature, dubbed App Tracking Transparency, or ATT, will hit iPhones within the next few weeks.

Why is this a big deal? It directly threatens the business models of companies like Facebook and Twitter, which leverage data to hit users with targeted ads – — and that gives TheWrap’s Sean Burch and Big Technology‘s Alex Kantrowitz plenty to talk about on the latest episode of Tech Talk. For reference, Facebook’s revenue hit $86 billion last year — and 98% of that came from advertising. Facebook warned investors earlier this year Apple’s privacy push could impact its business moving forward, and the company has recently said Apple’s changes will ultimately hurt small businesses that depend on Facebook and Instagram advertising. Cook, for his part, said he’s not buying Facebook’s “flimsy” arguments.

With that as a backdrop, Sean and Alex this week dive into the Apple-Facebook rivalry and explore why the social network’s business is “vulnerable”; a little taste of that conversation can be found below.

Later, we discuss Justice Clarence Thomas’ opinion, shared on Monday, that social media giants should potentially be regulated as common carriers, in the same way the government handles telecom companies. If that happened, companies like Facebook and Twitter would lose the ability to moderate content or kick users off their platforms; needless to say, it would be a move that has major repercussions in Silicon Valley. So be sure to stick around for the full podcast to make sure you’re up-to-date on the latest tech news.

Sean: What do you make of the Apple-Facebook feud right now?

Alex: I think Apple sees Facebook as a clear threat to its business, and is doing what it can to kneecap it. The same way that, when you send a message from an Android phone to an iPhone user, it turns up green. That’s not for your privacy, that’s because Apple is actively trying to kneecap Google, which provides an alternative mobile operating system in Android that you can switch off if you don’t like the iPhone and iOS or if you want something cheaper.

Similarly, Facebook is sort of a key piece of software on Android phones because we use our phones for calling and texting with friends, mostly. And Facebook has Facebook and WhatsApp and Instagram, and those work on both iOS and Android in the same way. So if you were, for instance, to move your iOS messenger groups from Apple messages to WhatsApp or Facebook Messenger, now all of a sudden you don’t worry about it turning into that green message when you move to Android, or you don’t worry about breaking your group chats when you move to Android. So more than a lot of people realize Facebook and Apple are mortal enemies. And I don’t think Tim Cook is this humanitarian, going around the world trying to save the children. I think he’s a businessman who’s doing what he can to undercut one of his key rivals.

Facebook’s stock price just hit a new all-time high, despite another data leak. But Facebook also strikes me as being relatively vulnerable compared to the four other tech giants — Apple, Amazon, Google and Microsoft — because they’re so dependent on advertising.

What does Facebook have? Nothing. They’re completely dependent on other mobile operating systems and you basically have to use these other giants in order to get to Facebook, and they’re dependent on the time you spend on the app. They know that this is an issue, so that’s why they’ve been beating the drums on virtual reality because they do own an operating system there with Oculus. Right now, we’re not living in that future they hoped for, yet. n

It’s not taking off the way Facebook hoped. And so Facebook is extremely vulnerable. And that’s why these moves Apple is making with iOS, directly attacking it. So to bring this whole point home, the product is one thing, but it’s also being at the mercy of other companies that’s really the tough part for Facebook.

Watch the full conversation in the video above. For more tech coverage, subscribe to the Big Technology newsletter.