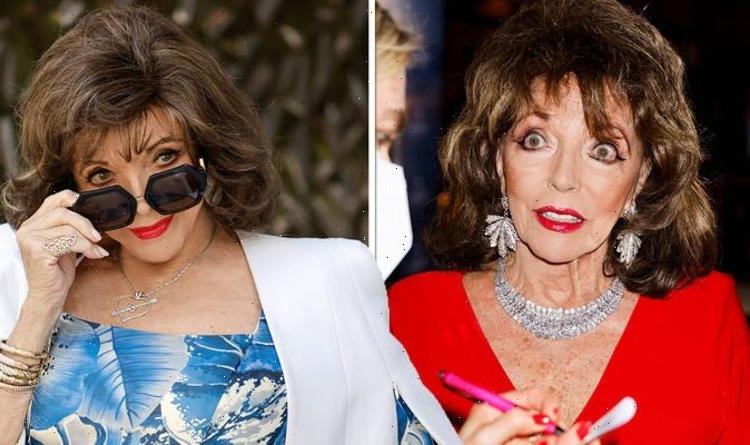 NTAs: Joan Collins walks out to ‘Simply the Best’

Dame Joan Collins has squashed the notion of retirement in a blistering admission as she talks about her new book. The beloved Hollywood star hit back at the idea in a recent interview, calling it “f**king rude”.

Joan is busy promoting her new book My Unapologetic Diaries about her life in front of the screen.

However, the star has recoiled at the idea of retiring from the limelight any time soon.

She spoke about this in a recent interview, admitting she doesn’t like the word “retire”.

The beloved Hollywood star was asked if she ever thought about putting her feet up in profile for the Sunday Times.

Joan was annoyed by the insinuation as she hit back: “I think that’s a f***ing rude question.

When the interviewer explained they were just wondering what’s next for her, Joan then opened up about what she disagreed with.

She added: “Us who have gotten older feel like we are allowed to work in a profession that has to use older people.

“There’s a perception about getting old that’s outdated. People are living longer and living healthier.”

The Hollywood starlet first began her career back in 1951 at the age of 17.

She starred in films like Lady Rides Again and The Woman’s Angle around this time, before finding fame in the US.

Perhaps her most lauded role was playing Alexis Colby in Dynasty.

However, in recent years she’s been appearing in films and series, as well as writing.

Her new book is released on October 14 and promises to “offer unvarnished opinions on some of the biggest stars on the planet.”

Among those chronicled in the book are members of the Royal Family and Donald Trump.

Elsewhere, she recently opened up about her appearance in another interview.

Speaking to the Daily Mail last week, she admitted she wasn’t a fan of her cheekbones.

She said: “They’re better when I’m thinner, because I’m a bit overweight now.

“I’ve got very thin legs and arms and shoulders but I put it on here, around the middle, which is why I’m wearing this loose top.

“My doctor said I shouldn’t put on any more [pounds]. It’s not healthy.”