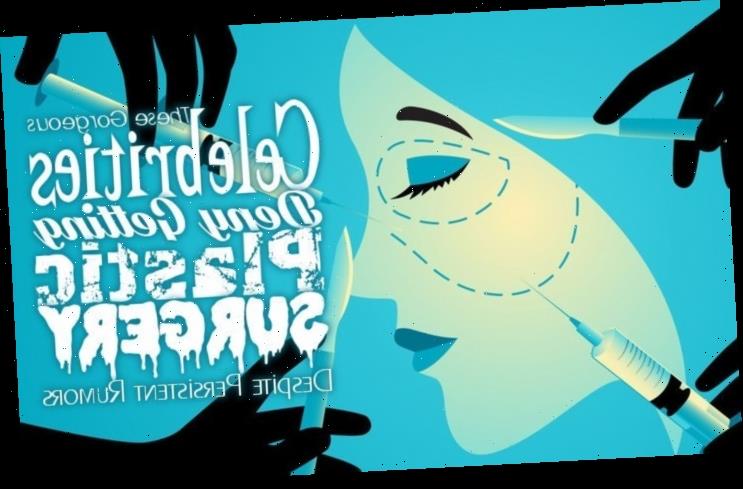 Some celebrities opt to react nonchalantly to the allegations, while some of them are more than willing to share a lengthy response in order to end the speculations once and for all.

AceShowbiz -Celebrities’ stunning body and perfect face proportion are unsurpisingly everyone’s goals. However, when someone is too stunning to be real, people often refuse to believe that they are all natural and suspect them to have surgically enhanced their beauty. Some of them are vocals about their suspicion, leading the stars to personally address the persistent rumors.

Some of the celebrities opt to react nonchalantly to the allegations. Meanwhile, some of them are more than willing to share a lengthy response in order to set the record straight about their body.

Here is the list of the celebrities who fight the persistent rumors of them going under the knife to boost their appearance.

Khloe Kardashian is among those who are accused of having a plastic surgery. The “Keeping Up with the Kardashians” star usually is not bothered with what critics have said about her online, but that day was different since she decided to clap back at a hater who accused her of having “all buyed your looks” in an Instagram comment.

Responding classily to the user, the Good American Jeans founder replied as she corrected the person’s grammar. “The word would be bought babe. You mean we all bought our looks,” so the star wrote in 2018. Also in the same year, the mom of one alluded that her face transformation was all because of contouring, explaining, “one day I think I’ll get [my nose done] because I think about it everyday. But I’m scared so for now it’s all about contour.”

Ariel Winter is always known for her curvy bod, and when she flaunted a thinner figure early in 2019, everyone was quick to accuse her of going under the knife to achieve the new look. “I’m sorry you felt the need to so dramatically change your appearance. I liked you just as you were. I hope you are happy in your new body though,” one fan wrote on her Instagram account.

The “Modern Family” caught wind of the comment and replied, “I appreciate you wanting to help girls love themselves the way they are, but you are also kind of cutting someone (me) down which isn’t what I think you were trying to do? I also didn’t get plastic surgery. That is also not supportive of women if you’re just assuming about the way they look.”

Kendall Jenner is a gorgeous lady, that’s for sure. However, some people didn’t think it was all natural as they were convinced that the model had “facial reconstruction” surgery. The rumors wouldn’t die down, prompting Kendall to clear things up on her personal website.

“[P]eople were saying, ‘Kendall deleted her account to have full facial reconstruction.’ “All of a sudden, photos of us came out with headlines like, ‘OMG Kendall got her lips done and got full facial reconstruction–look at her cheekbones, look at her nose,’ ” she wrote. “I was like, this is CRAZY. I didn’t even address it at the time. Because if I address it, people are going to be like, ‘Oh, so she’s defending herself–she must be guilty.’ [Kylie Jenner] saw it all unfold and felt bad, so she went on Snapchat and took the blame.”

All this time, people believe that Megan Fox had plastic surgery to achieve her perfect face proportion. When the “Transformers” actress returned to Instagram after a while back in 2019, the comment section was filled with comments accusing her of returning of having “new plastic surgery.”

The star, however, had addressed the allegations back in 2011. She cheekily responded by posting a slew of photos on Facebook album which was titled “Things you can’t do with your face when you have Botox.” The photos saw Megan making various facial expressions before pointing to her wrinkles in some of the snaps.

One of Irina Shayk‘s charming points is her plump lips. For the same reason, she’s always been rumored to have injected some filler on her lips to make them look bigger. Shutting down the speculations in in the summer 2019 digital cover story for BAZAAR, the model said, “Look, if somebody wants to inject their lips because they feel bad, God bless them. I don’t judge anyone. I always promote natural beauty because I think we live in this perfect world where everyone wants to be perfect. But I’m not perfect. Sometimes I have a double chin. Perfection doesn’t exist.”

Chrissy Teigen is also among the celebrities who were forced to set the record straight about her body amid plastic surgery rumors. However, the model did it in her fashion as she joked about her “fake body.” Speaking to reporters at a Becca event in 2017, she declared, “Everything about me is fake except my cheeks.”

The wife of John Legend continued, “I had my armpit sucked out. It added two inches of length to my arms. [That fat] is coming back though, so I might need to go in and pay for it again.” Pointing to her forehead, nose, and lips she jokingly quipped, “Fake, fake, fake.”

Renee Zellweger apparently has had enough of speculations that she had plastic surgery. The actress sparked speculations that she went under the knife when she returned “unrecognizable” in 2014. Calling the rumors “humiliating” and the “hardest kick” to her ego, the actress denied all of them in an interview with PEOPLE that year.

Though she admitted that the conversation of her look was “silly,” she felt the need to address it because “it seems the folks who come digging around for some nefarious truth which doesn’t exist won’t get off my porch until I answer the door.” She continued saying, “I’m glad folks think I look different! I’m living a different, happy, more fulfilling life, and I’m thrilled that perhaps it shows.”

No, Bella Hadid never gets plastic surgery. Bella, who is one of the most popular and highest-paid models in the industry, claimed that her beauty is all ‘au naturel’ and the 23-year-old stunner wasn’t afraid to challenge anyone who thought otherwise.

“People think I got all this surgery or did this or that. And you know what? We can do a scan of my face, darling,” the youngest daughter of “The Real Housewives of Beverly Hills” alum Yolanda Hadid said in an interview with InStyle in 2018. “I’m scared of putting fillers into my lips. I wouldn’t want to mess up my face,” she also added.

Ariana Grande might look different from before but the “7 Rings” singer insisted that it had nothing to do with having a plastic surgery. In a 2014 video, Ariana addressed rumors of her getting “boob job, brow lift, cheek shaving, lips done,” adding that the puberty simply hit her good.

She said at the time, “I was like, ‘You’re comparing a picture of me from when I’m 14 years old to when I’m 21, and I’m wearing a push-up bra.” She added, “That’s why I’m on the cover of [a] magazine and they’re saying I got plastic surgery. Goddamn, puberty went nice. It came late, but she finally came through for me.”

You can’t talk about plastic surgery rumors without mentioning Kim Kardashian. The cosmetics mogul, who makes everyone envy with her hourglass body, particularly sparked plastic surgery allegation after she bounced back pretty quickly after giving birth to eldest daughter North West in 2013.

Feeling wronged, the “Keeping Up with the Kardashians” star furiously addressed the matter, “I am very frustrated today seeing reports that I got surgery to lose my baby weight! This is FALSE.” She explained, “I worked so hard to train myself to eat right and healthy, I worked out so hard and this was such a challenge for me, but I did it!!! I’m so proud of my accomplishment and NO ONE will take this away from me with fake reports! Say what you want about me but I work hard and am the most disciplined person you will ever meet!”