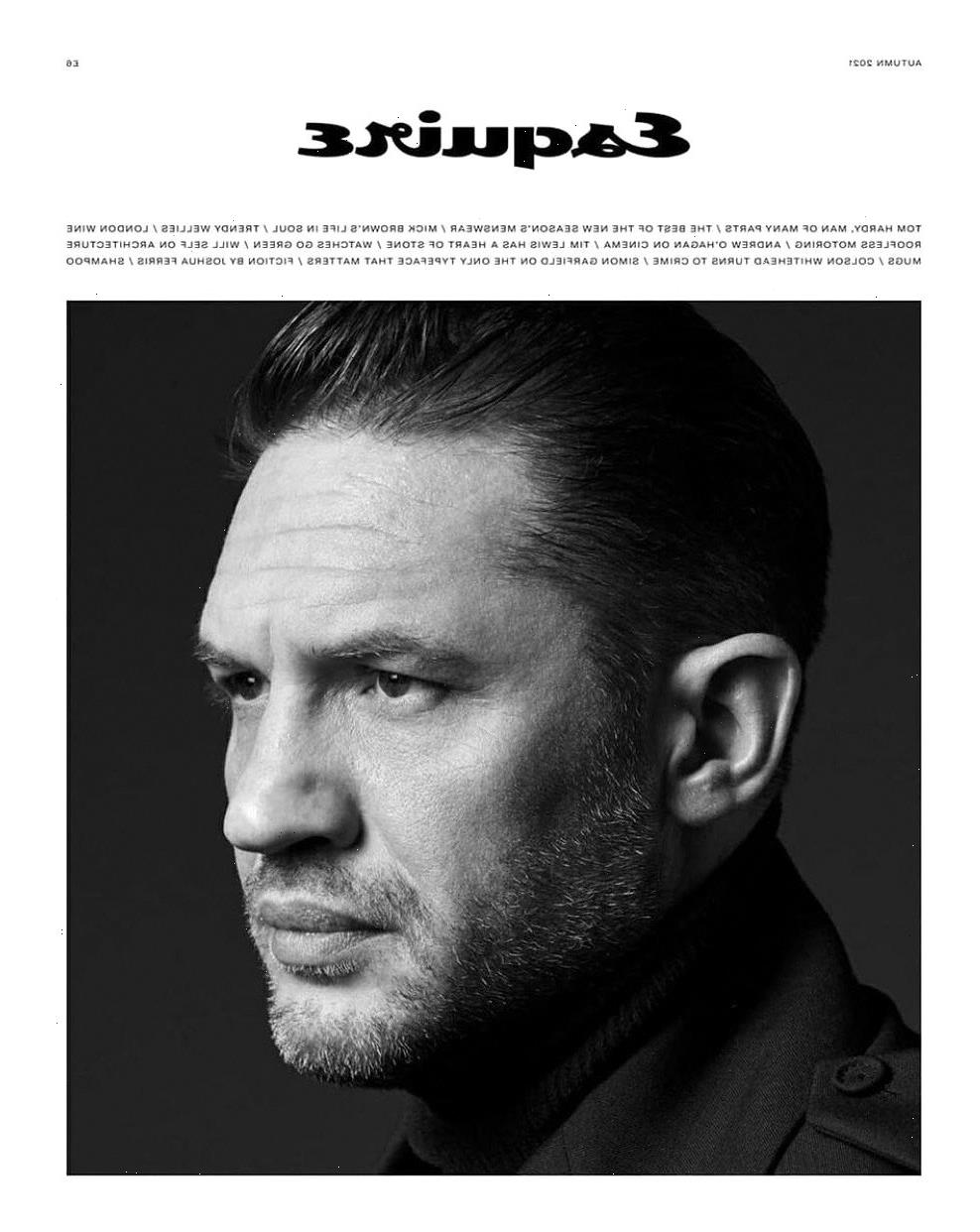 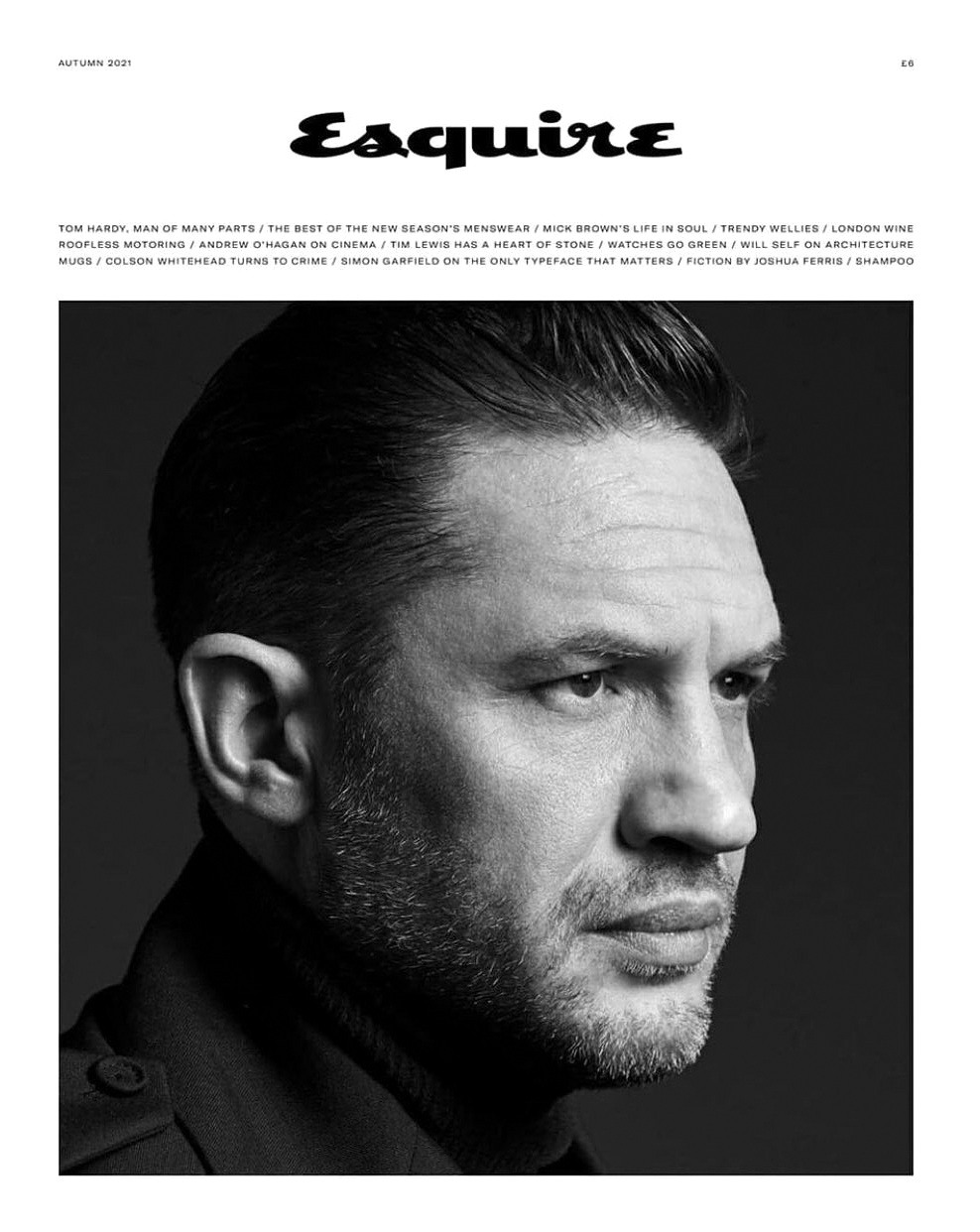 Tom Hardy covers the Autumn issue of Esquire UK to promote Venom: Let There Be Carnage. That’s the sequel to the surprisingly successful first Venom movie. I didn’t realize that Venom made more than $850 million worldwide, so of course they put together a sequel. The first film worked better than it had any right to, and that was largely because of Tom Hardy and Riz Ahmed. The acting was pretty good and that grounded what could have been a very stupid movie. Not only has Tom returned as the same character, he’s now taking on a producer role, and he and his writing partner came up with some of the story for the sequel. Tom chatted with Esquire UK about all of that and more – you can read the full piece here. Some highlights:

Doing Venom right for the fans: “There were other objectives with Venom, but they were minor compared to the main objective: can I land Eddie Brock and Venom as an established Marvel superhero? Venom and Eddie Brock are part of a universal canon among those who know about superheroes, so I don’t want to scratch the record. I’d like to be part of that legacy and not bugger it up completely. Not bring shame on it. Ha! You’ve got Black Panther, Thor, Wonder Woman, Venom; there’s not one that you go, ‘Ooh God, have you seen that? That’s f–king terrible! Avoid the f–king terrible one!’ Maybe people dislike it, maybe people really like it, but it’s not dismissed.”

How he felt at the start of the pandemic: “When everybody was starting to store toilet paper and take things off the shelves it was like, hang on, do we need to arm ourselves? Is this the zombie apocalypse? There was a moment at the beginning where it was like, are people going to riot?” (Hardy did stockpile “vitamin D, vitamin K and nappies.”)

How he managed during the pandemic: “Fifteen-minute workouts in the garden, home-schooling and making sourdough.” Home-schooling was “very tough”, but the sourdough at least he quite enjoyed. “I still have the leaven! You have to feed that every day. That’s a commitment. I’ve actually managed to back it up so I’ve got two. Just in case someone drops one on the floor or the jar explodes and it’s like, ‘That’s a year-and-a-half’s work!’”

His lockdown fantasies: “I was thinking I might open up a sourdough café. Coffee and sourdough and jiu-jitsu and AA meetings. You can bring your dog.”

His kids: The youngest of whom are two and five, and found that an early-to-bed, early-to-rise regimen suited him too. “I didn’t pay much attention to structure and discipline as a kid,” he says. “But without it now, being a father, I’m lost.”

He stared into the abyss: “I had an opportunity to observe the world and my own behaviours and how I lived my life and what’s important and what isn’t. I spent a lot of time fighting the concept of ‘grown-up’. I think all the baddies and all those sorts of ‘grrrr’ characters that I’ve played, I’m not that. The whole acting thing has been kind of peacock-ish, counter to what I am. What’s most indelible on my memory are things that are shocking or scary so it’s very easy to mimic them. It’s actually much harder to mimic things that are soft and nice and intimate if you don’t grow up in that way. Now I’m getting older these things are becoming less scary. So it’s not caring so much what people think.”

Realizing what’s important: “I think there’s less reason to work, ultimately, because the life-drive is to be with the kids and to be fit and healthy and eat well and stuff. If you’ve got a roof over your head and a bed underneath you and food in the fridge, how much is enough? Because it’s not a dress rehearsal, life, is it? It’s going out live. This is one-time.”

He’s not worried about disappearing: “I’m not so worried to disappear now. When I was a youngster you had to be heard, otherwise you’d be invisible. Once you’ve established yourself you can stop making that much noise. Because you’re here now, what are you going to do? And what is enough? What do you need? What do my family need? So that is very relevant. I think everybody needs a little bit of their own thing that they do. I like jiu-jitsu and sourdough. That fulfils me.”

He sounds like he’s in a better place these days, just in general, with his work-life balance and figuring out the pandemic and wanting to be around for his two little kids. I went into this interview thinking he was going to be a douche, and while he did come in late and while he did try to avoid actually answering real questions for a while, he ended up giving Esquire what they needed, which was some sense of reflection, that he’s maturing as a man and a professional. The bar is so low for attractive white men, right? He says some stuff about his kids and baking and most people are like “omg, KING!”