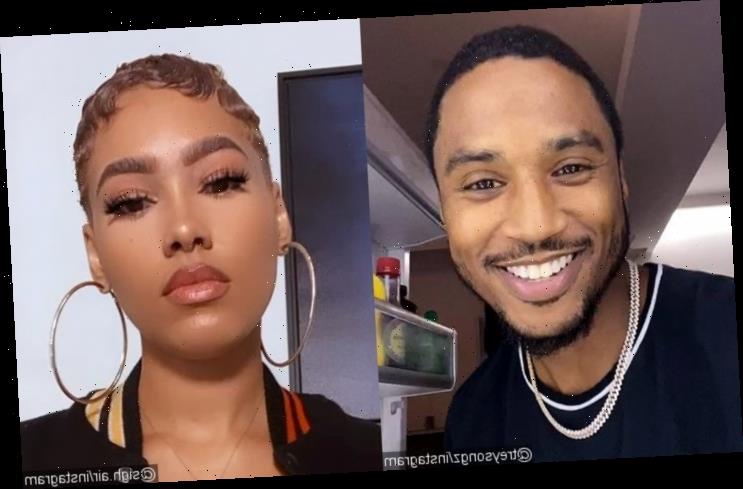 Saiyr Gibson of hip-hop duo Ceraadi previously seemed to confirm her romantic relationship with the ‘Bottoms Up’ rapper by sharing photos of them snuggling up on Instagram.

AceShowbiz -Are Trey Songz and Saiyr already over? The two stars sparked speculation that they’re an item after they packed on the PDA in Instagram pictures shared earlier this month, but the one-half of hip-hop duo Ceraadi has now sung a different tune.

On Tuesday, October 27, Saiyr posted on her Instagram account a sexy video of her squatting while moving her hips and holding her phone. She dressed in a sparkly bra top and short pants, while sporting platform shoes and a blonde wig which was styled into a messy updo. In the caption, she declared her single status as writing, “This a** SINGLE.”

Further making it clear that she’s not dating anyone right now, she wrote on her Instagram Stories, “I don’t have a bf. I don’t’ have a gf. Ppl will talk on my name. I am no one’s property. Ppl be playing the claim game w/o me knowing. I don’t fck w/ nobody. I do what I want.” She also made use of the post to urge people to stream Ceraadi’s recently released EP “#GRWM”.

Lest than two weeks ago, Saiyr seemed to confirm her relationship with Trey Songz as she posted on her Instagram feed some photos of her snuggling up to the “Bottoms Up” hitmaker. Saiyr initially hid the face of her boo in one of the photos, which were seemingly taken at a party, writing in the caption, “No Face No Case.”

She later shared another image taken on the same occasion. Wearing casual clothes, the twosome shared an embrace as Trey, who showed his face to the camera, flipped the birds. “I like him,” she declared in the caption, adding a brown heart emoji.

Many of Trey’s fans were opposing their alleged romance at the time, pointing out that she is a Donald Trump supporter. Following the criticisms regarding their relationship and her political stance, Saiyr later deleted the PDA pics with Trey from her page.