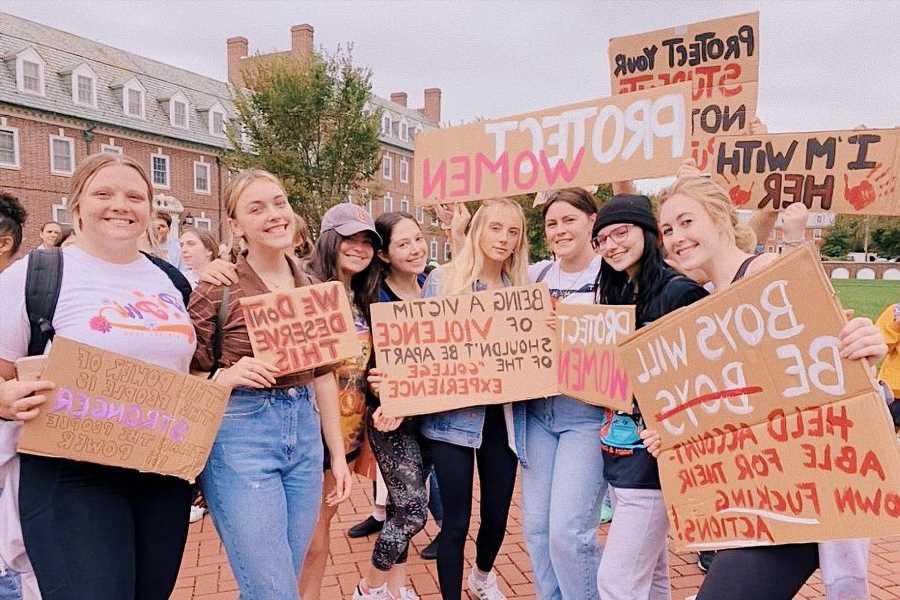 Protests have broken out all over the University of Delaware campus following the arrest of a 20-year-old student for the kidnapping, strangulation to the point of unconsciousness, and assault of an unnamed female student last Friday in an incident that took place off campus.

Brandon Freyre, 20, was arrested by Newark Police on Friday, October 8th, and charged with kidnapping in the second degree, assault in the second degree, terroristic threatening, strangulation, and criminal mischief after an altercation with a female student, according to a press release from the department. (The release did not specify the nature of their relationship, but when reached by Rolling Stone, Andrea Boyle, the director of external relations at the University of Delaware, classified it as a “dating violence incident.”)

How Covid Left a Generation in Limbo

Meet the Beatle: A Guide to Ringo Starr's Solo Career in 20 Songs

According to the Newark Police Department press release, which was issued on Monday, October 11th, Freyre and the victim “engaged in a verbal argument,” during which he “damaged property belonging to the victim.” He then allegedly “struck the victim with blunt objects, sprayed her in the eyes with spray paint and threatened to kill the victim if she contacted police,” “strangled her to unconsciousness,” then blocked her exit so she was unable to leave the apartment; four hours later, he allegedly threw her down a flight of stairs, after which she fled and went to the police. He was later released on bail.

please share. we deserve to feel safe on our campus. stop all of the /iolence. #ud #universityofdelaware #college #delaware #protest #dv #share

Although a few local news stations reported on the alleged assault, the incident started to attract national attention after University of Delaware college student and TikTok creator Kiera Spann, 20, posted footage from a protest on Tuesday afternoon, which started at Freyre’s fraternity, Kappa Delta Rho, and ended on the campus’s Main Street. About 100 people attend the protest, wielding signs like “Protect Women” and “Boys will be held accountable for their fucking actions.”

In an interview with Rolling Stone, Spann says she found out about Freyre’s arrest via a text message from a friend days after it happened, and that no one on campus received any safety notifications that the assault had occurred. “Everyone was outraged by the fact that the university had said nothing, even though it was committed to and by a University of Delaware student,” she says.

In response to the incident, Kappa Delta Rho issued a statement on social media condemning the violence, saying that as soon as it was made aware of the incident they “immediately notified the appropriate authorities on campus,” and that it had permanently expelled Freyre from the chapter.

When asked why the university did not issue a safety notification after the incident, Andrea Boyle, the director of external relations, tells Rolling Stone the university did not do so because “this was a dating violence incident,” adding that the suspect was already in custody. “We utilize an alert system for imminent threats, where students need to take action,” Boyle says. She did not respond to follow-up questions as to why an assault on a student did not qualify as an “imminent threat.”

In the days after the incident, Span was further infuriated by the fact that the University of Delaware had not acknowledged it on social media, instead posting generic content such as sun-drenched photos of campus, which were flooded by angry comments from people wanting to know why the university was not publicly acknowledging the assault. “It makes me really nervous and scared that if something like this were to happen to me, [other people] might have no idea,” she says of the university’s inaction.

Spann says she posted her video around 3:00 p.m yesterday. At 8:00 p.m. on Tuesday, more than four days after the initial incident occurred and after Spann’s video had gone viral, racking up more than 600,000 views in just a few hours, the University of Delaware issued a public statement. “We are writing to acknowledge the harm inflicted, denounce the violence reported, and call for our community to come together and advance our goals of a campus climate free of all violence, including gender-based violence and violence against women,” the university said.

In response to questions from Rolling Stone about why the university took so long to respond to Freyre’s arrest, Boyle says “the University took immediate action on Friday, barring Brandon Freyre from campus. (The incident took place in the early morning hours of Friday.) Newark, Delaware Police, the arresting agency (not our University Police force) arrested him. They issued a press release on Monday.” She also linked to the university’s statement. Boyle did not clarify whether Freyre would be expelled.

For her part, Spann says the statement was “too little, too late.” She and other students are planning a follow-up protest on Wednesday evening at 5:00 p.m. “The fact that they don’t seem to care about the safety of their students and instead cover it up until it becomes a national issue shows that they care a lot more about their reputation than us,” she says.