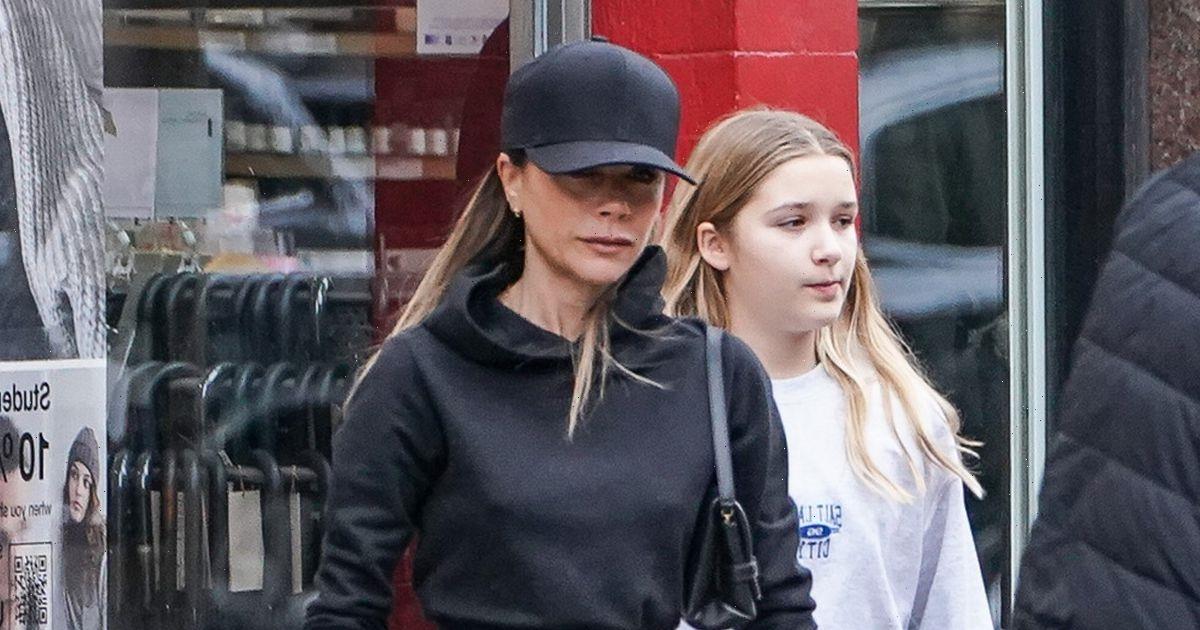 Victoria Beckham was spotted out shopping with her daughter Harper in Kensington High Street in London over the weekend, amid husband David Beckham’s Qatar backlash.

The 48 year old appeared glum whilst on her shopping trip, following the heavy criticism husband David, 47, has received for continuing on as a Qatar ambassador, as the country still has homosexuality banned and has had its poor human rights exposed.

David reportedly signed a £10 million deal with the FIFA World Cup hosts for appointment of the role, which has sparked controversy among fans.

Victoria tried to brush off her husband’s latest scandal as she was seen spending quality time with daughter Harper, 11, for some retail therapy on Saturday.

The ex Spice Girl opted for a rare casual outfit during her lowkey outing, as she wore a black fitted hoodie with a pair of matching leggings, and accessorised her look with a black cap and handbag and wore a pair of white trainers.

Victoria was seen holding a giant shopping bag as she exited a MUJI store with Harper, who sported a casual ensemble.

This week, comedian Joe Lycett directed David in a video as he urged him to end his sponsorship with Qatar.

Joe, 34, promised he would donate £10,000 of his money to LGBTQ+ charities if the former footballer parted ways. He then said he would shred the money along with David’s “status as gay icon”, if he did not.

The comedian appeared to shred £10,000 on a livestream, as David remained as ambassador — though he later admitted the money was fake.

David responded to his backlash in a pre-recorded video last Thursday as he addressed as the Supreme Committee’s “Generation Amazing” youth festival in Doha, Qatar.

Birmingham Mail reported that the sports legend said the Qatar World Cup will be a "platform for progress".

David told the audience: "Qatar dreamed of bringing the World Cup to a place that it had never been before, but that it wouldn’t be enough just to achieve things on the pitch — the pitch would be a platform for progress.

“Dreams can come true. That is why you are here. You share Generation Amazing’s twin passions for the game of football and for making the world a more tolerant and inclusive place.”

He continued: “Almost two decades ago a small group of football lovers from Qatar had an equally fantastic dream: that they could bring the greatest football show on earth to their home country and to the Middle East for the very first time.

“And now we are here. Because when dreams are harnessed and mixed with dedication and hard work, they are no longer dreams. They become reality.”