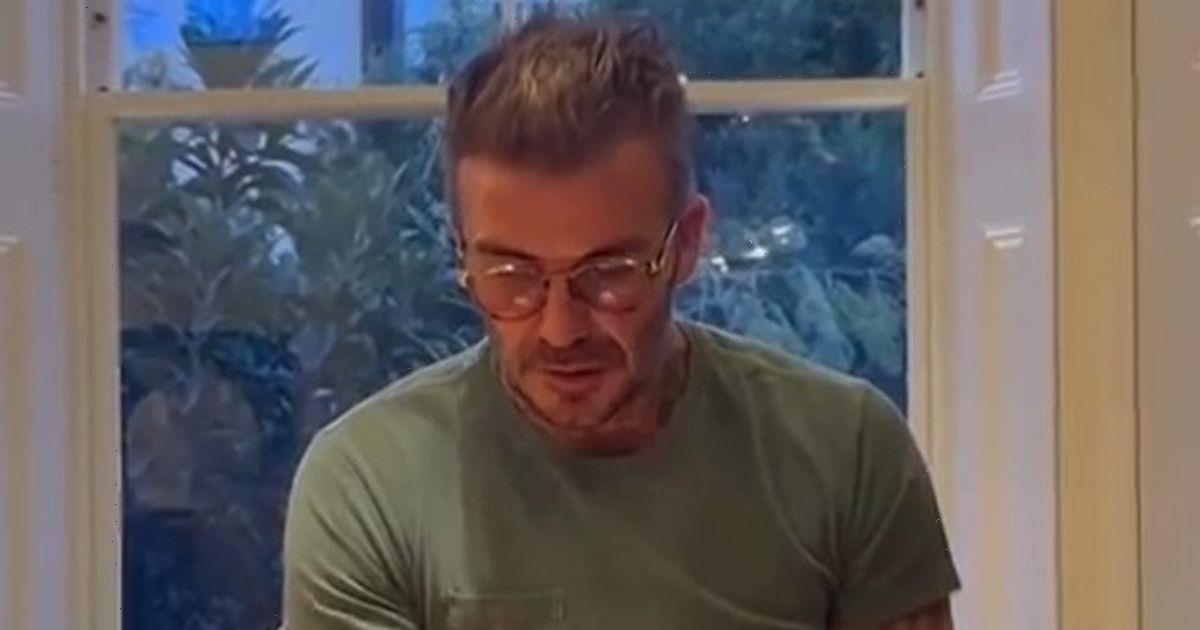 Christmas comes but once a year and footballer David Beckham clearly intends to make the most of it.

The ex-England captain has been seen giving a rendition of Mariah Carey’s festive track, All I Want For Christmas, in a hilarious video uploaded by his wife, Victoria.

Filmed at their North London home, Victoria captures David sat in the kitchen, idly scrolling on his phone as he belts out the Christmas classic.

Much to the amusement of the former Spice Girl through, David struggles to reach the high notes.

She quipped: “You were struggling with that high note, weren’t you?”

Upon hearing her, the footballer savagely replied: “Like you do!”

He shakes his head, adding: “You do.”

David, who had been blissfully unaware of his wife until the comment, then proceeds to sing the rest of the verse.

Whilst we never see Posh, she can be heard giggling in the background as the clip ends.

Instead the footage focuses on David, who is seen wearing tortoiseshell glasses, gold jewellery and an olive green t-shirt which complemented his muscular frame.

Fans were quick to react to the hilarious clip, with many discussing David’s good looks in the comments.

One wrote: “That man could be singing ba ba black sleep and it would still be hot…”

Model Kelly Brook even complimented him on his vocal ability, writing, “He’s actually good…” followed by a crying laughing emoji.

However, others were more impressed by David’s comic response with one fan saying in the comments: “Like you wouldn’t….ohhh brutal.”

But not all of Victoria’s 30 million followers were impressed with the new clip of her husband, who has recently come under fire for his controversial deal with Qatar.

The footballer has been promoting the country as a tourist destination, ahead of the World Cup and has signed a lucrative £10 million contract to be the ambassador for the event.

This has enraged many of David’s LGBTQ+ fans have condemned the athlete for working with the country, where being gay or trans is illegal.

Criticism surrounding David Beckham’s deal with the country peaked just before the start of the World Cup, with comedian Joe Lycett shredding the footballer’s status as a “gay icon” in a live stream.

The comic then also donated £10,000 to various LGBTQ+ charities, which was a £1000 for every million Beckham received from the deal.

Instagram users also criticised the footballer in this latest video, with several posting rainbow flags in the comments.

One even wrote: “Trying to get back into the gays’ good books. I see you.”