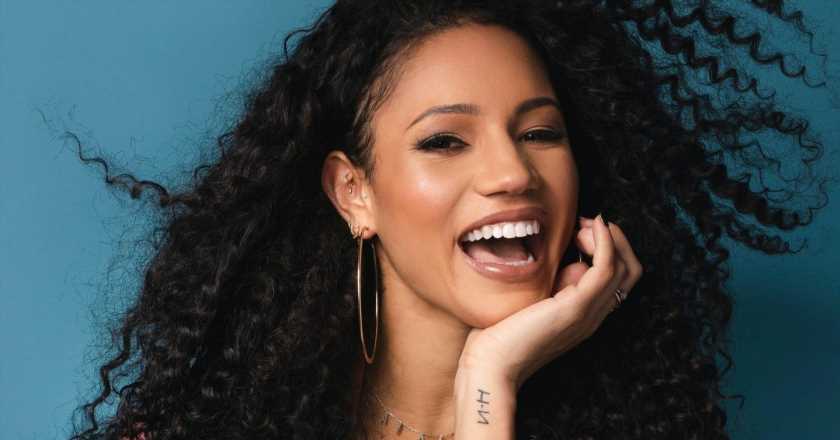 Vick Hope gets real about life, work and what she’s up to this summer.

“I just want to have a nice time. It’s really not as complex as I used to think it was. We live in a society that tells us everything is supposed to be hard – and don’t get me wrong, a lot of stuff is – we think we’re supposed to grind, the idea of the side hustle! But I think we should place as much onus on enjoyment. I’m trying to do things that make me happy and stimulate me and bring me peace.”

It sounds simple, doesn’t it? But how many of us have just not had that nice a time recently? DJ, presenter and author Vick Hope knows where you’re coming from, but her motivation to seek out the good stuff is just the inspirational energy we could do with amid the inescapable doom of war, political wrangling and the cost of living crisis.

But the upbeat broadcaster admits that pledging to find the joy, and not just focusing on work, is something she has to apply herself to consciously. “I’ve worked myself into the ground so many times, I still do, I can’t lie! I don’t have a day off until September, and I’ve promised myself I’m going to change that.” And this summer is busier than ever for Hope, who was born in Newcastle (when she says ‘book’, you can really hear her Geordie twang) and started her career as a reporter for MTV.

She’s the presenter of the Women’s Prize for Fiction podcast interviewing guests from campaigner Baroness Doreen Lawrence to Bridgerton’s Adjoa Andoh about their favourite books, from a shortlist comprised of Maggie Shipstead, Meg Mason, Ruth Ozeki, Lisa Allen-Agostini, Elif Shafak and Louise Erdrich. (Ruth Ozeki was announced as the winner of the Women’s Prize for Fiction on 15 June).

Alongside that are her three shows on Radio 1 – including broadcasting from Glastonbury for the BBC. “It’s my first visit,” she says excitedly. “I’ve tried to get tickets before, but never been successful. Everyone keeps giving me advice: make sure you’re at the stone circle at sunrise, make sure you go down the rabbit hole. It’s very overwhelming. My mum and dad have bought tickets, so they’re coming too! It’s going to be great.”

She’s also filming The Beauty Rewind Clinic for UKTV, which follows people seeking to reverse cosmetic procedures for a more natural look. “In a world where we are conditioned to strive for unrealistic, often homogenous, ideals of beauty, resorting to sometimes risky procedures to achieve them, I have always cared deeply about spreading the message that what makes us different is what makes us beautiful,” says Hope. Alongside that is her new ITV lifestyle show, Vick Hope’s Breakfast Show, where she’ll be recommending books and creating cocktails for the weekend.

So, with summer waiting (a little too) patiently at the door, Hope talks us through her picks of what to watch, read and eat over the next few months to find joy. As she says: “We all deserve the ability to get excited about something!”

I love poetry, it helps you see the beauty in the world when it feels ugly. It puts things into perspective and gives you moments of unadulterated joy; it’s so potent as an art form.

I’ve got a copy of Bone by Yrsa Daley-Ward in my bag and I love Warsan Shire. I also often find myself reading Maya Angelou and Mary Oliver – poets who, even when they’re talking about pain, do so in a way that is so beautiful I feel glad to be alive. I’m looking forward to reading more Irish literature – when Laura Whitmore came on my podcast she recommended the poet Eavan Boland and she was talking about the notion of belonging and, being Irish and having come to England, there was a lot she could relate to. I read Naoise Dolan’s Exciting Times and the way she plays with language and expresses the most mundane actions is just exquisite.

I love Jones & Sons in Dalston, it’s so east London. Their bottomless brunch is brilliant, you can get all the different dishes. On my birthday, my brother Louis made his way through every meal on the menu, from steak to waffles to a full English. Also, it was recently in the film Boiling Point – it’s such a simple pleasure isn’t it, when you see somewhere you know in a film?

There’s one place and one place only: Allpress on Dalston Lane. Walking there for a coffee is what gets me out of bed in the morning – I go every day for a flat white or skinny latte. It’s a full roastery where they grind the beans. I sit in the gorgeous garden and work or write and they have loads of nice plants like lavender – apparently it’s good for you to get as much herbal scent wafting around as possible.

How to escape the city

My parents live in Northumberland, in the middle of nowhere. Not many people realise how much rugged beauty there is in the north-east. I’ve started going back and consuming the landscape like I did as a child: running through the forest… there’s a lake there, and the way the light hits it is stunning. It’s surrounded by trees and birds and the air just tastes different. I’m going back to Ibiza this summer. The north, around Benirrás, is my favourite place because of how spiritual and magnetic it is – a heady mix of raving and meditating. I do yoga there with a woman called Kim, who I first met when I was burnt out. The landscape is vast and gorgeous.

What to listen to

I love neo soul; the Joy Crookes, the Cleo Sols, the Leon Bridges, the Samm Henshaws of the world, that’s my jam. And Latto, who has all these big sounds at the moment. But I’m really here for the dance music this summer. It is time. There are people like Piri and Tommy who are doing really lovely things, and Shy FX is back, it’s dancehall mixed with DnB. That’s what I want to be dancing to in a field full of people I don’t know in the sunshine, or the rain. I want to be feeling everything intensely.

Listen to the Women’s Prize for Fiction podcast at apple.com.Vick Hope’s Breakfast Show is on ITV every Sunday at 8.30am.