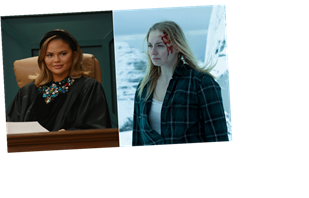 A new era of streaming is about to arrive, and it is bringing a ton of new shows starring A-list celebs with it when it launches. Quibi has big plans to stand out from top streaming platforms like Netflix and Hulu by being an exclusively mobile-based service featuring episodes that will not exceed 10 minutes in length. Basically, the app is designed for TV lovers who prefer short, snappy content to long, drawn-out episodes. But the biggest draw is what’s coming to Quibi in April 2020. The new platform is set to launch with 50 new shows, and they star some very big names.

Less than a month ahead of its launch, Quibi announced that 50 brand-new shows will be available to stream when the app becomes available on April 6. The shows run the gamut from intense scripted dramas to fun-filled game shows, along with comedies, talk shows, and documentaries for something to excite every TV fan. Plus, the new shows boast some major star power, like Chrissy Teigen, Sophie Turner, Liam Hemsworth, and Jennifer Lopez. Oh, and I definitely need to mention that if you sign up for Quibi before the April 6 launch on Quibi.com, you’ll get a 90-day free trial. So secure your free three months of Quibi and then check out this list of shows that you will definitely want to watch first thing on April 6.

She may not be the Queen of the North any longer, but Sophie Turner is still battling a harsh, snow-filled landscape in her first TV role since the end of Game of Thrones. In Survive, Turner will star as a struggling woman named Jane who discovers a renewed will to survive after a plane crash leaves her stranded on a snowy mountaintop with only one other survivor, Paul (Corey Hawkins). The series is based on Alex Morel’s 2012 novel of the same name, and you can check out the teaser below.

Chrissy Teigen totally rules social media, and now she’s taking her epic clapbacks and tenacious decision-making into her very own courtroom. Each episode of Chrissy’s Court will see Teigen presiding over a different small claims case, ending with her ruling on the matter. As an added bonus, Teigen’s beloved mom Pepper Thai will serve as the court’s bailiff. Fans of Teigen already know how decisive and hilarious she is on Twitter and Instagram, so this courtroom show seems like the perfect next step.

A lot of people need a boost of positivity right now, and that is exactly what Quibi’s new reality show Thanks A Million promises to deliver. The uplifting series is executive produced by Jennifer Lopez, and each episode will center on a random person receiving $100,000 with the task to pay that money forward. The show’s title is a reference to the $1,000,000 that will be paid forward at the end of the show’s ten-episode run. Plus, each episode will star a major celebrity. The ten celebs featured in the show are: Jennifer Lopez, Kristen Bell, Nick Jonas, Tracy Morgan, Aaron Rodgers, Yara Shahidi, Gabriel Iglesias, Anthony Davis, Kevin Hart, and Karlie Kloss.

Ashton Kutcher’s iconic prank show was a staple of mid-aughts MTV, and now Punk’d is back with a new host to terrify today’s biggest celebrities. Chance the Rapper is the new mastermind behind the show’s massive pranks, and although it’s anyone’s guess which stars will be his targets, a first-look clip shows Chance releasing a gorilla in front of an unsuspecting Megan Thee Stallion.

Gale didn’t get to see too much action in The Hunger Games, but now Liam Hemsworth will be at the center of his own dystopian thriller where everyone is trying to kill him. For Hemsworth’s first lead TV role, he will play Dodge Maynard, a man with a terminal illness willing to go great lengths to support his pregnant wife. He winds up accepting a deal from a mysterious man (Christoph Waltz) to make millions of dollars, but only if he can survive being hunted. Check out the teaser below.

Those are some of the buzziest new shows that Quibi users should definitely check out, but there are so many more new shows launching along with the app on April 6 as well.

When the Streetlights Go On

This series, which features Kristine Froseth, Queen Latifah, Mark Duplass, and Tony Hale, is about how a suburban community tries to cope after the murder of a young girl.

Comedy fans will definitely want to check out this new series starring Will Forte and Kaitlin Olsen as wannabe house-flipping stars who wind up entangled with a Mesican drug cartel.

If you’re an HGTV devotee who also loves true crime, then Murder House Flip is basically made for you. The show will challenge renovation experts to make over some of the most infamous houses where murders have occurred.

Did you know Offset has a passion for high-end cars? The rapper will explore his favorite topic with some celebrity friends in his new automotive series — and yes, Cardi B will be making an appearance.

Idris Elba is out to prove that he’s not afraid to do his own stunts as he competes against professional driver Ken Block in a series of wild automotive challenges.

Music fans, get ready for an inside look at how your favorite artists make their biggest hits. Each episode will focus on a behind-the-scenes collaborator revealing new details about music’s biggest stars. The show is a must-watch for Ariana Grande fans, since is stars her choreographers Scott and Brian Nicholson.

Keke Palmer and comedian Joel Kim Booster are bringing the iconic MTV dating show into 2020 by bringing in daters of all genders and sexual preferences to find their match by using social media.

This comedic game show will pit two straight contestants against one another in various LGBTQ-themed challenges, with the help of celebrities like Ilana Glazer, D’Arcy Carden, and Trixie Mattel.

You’ve never seen a cooking show like this before. In the new competition series, blindfolded chefs will have a meal launched at their faces from a cannon, and they will then compete to see who can come closest to recreating the original dish.

Usher will judge this dance competition series that explores the unique dancing styles of various cities throughout the U.S.

You Ain’t Got These

There is a whole culture surrounding sneakers, and this new series executive produced by Lena Waithe will explore every facet of it by speaking to celebrity sneakerheads like Nas, Hasan Minhaj, and Carmelo Anthony.

Reese Witherspoon presents this nature docu-series that focuses on various species of animals where the females stand at the top of the social hierarchy.

Megan Rapinoe will host this docu-series, in which each episode will tell the story of an athletic prodigy who achieved something historic.

This series will tell the story of Jasiel Correia II, who became the youngest person elected major of Fall River, MA at age 23, but his time in office was marred by charges of fraud and extortion.

Chef Evan Funke will take viewers on a tour of Italy’s greatest masters of pasta to learn all the secrets of the beloved food.

This recap show will collect all of the best moments from late-night TV that aired the night before so you don’t have to worry about staying up past your bedtime.

ASMR has become a global sensation, and this new series takes it to the next level with guided meditation and images of various breath-taking destinations.

RuPaul’s Drag Race star Willam Belli and supermodel Denise Bidot will invite drag queens to join them in breaking down all the current news in the fashion world.

The Nod with Brittany & Eric

The hit podcast is not a daily series, which tackles major moments and under-explored areas of Black culture.

Hot Off the Mic

This daily comedy news show will feature both established and emerging comedians offering their takes on each day’s biggest headlines.

This new show will cover all the biggest stories in the world of gaming.

All the Feels by the Dodo

The Dodo will curate a daily animal story meant to uplift viewers.

The daily show will cover all the latest TV and movie news.

This news show is focused on all things pop music.

Fandango will collect all the latest movie trailers in one place.

Close Up by E! News

This news show is all about celebrity and pop culture.

No Filter by TMZ: AM

This daily show takes you inside TMZ’s newsroom each morning.

No Filter by TMZ: PM

This daily news show takes you inside TMZ’s newsroom each evening.

A team of correspondents will tackle one news story a week on this news show.

Around the World by BBC News

A global news show run by the BBC.

A daily news show focused on news in the Latinx community.

For the Cultura by Telemundo

A pop culture news show focused on news in the Latinx community.

Weather Today by The Weather Channel

TSN’s daily show covering news in the world of sports.

The Replay by ESPN

ESPN’s daily show covering news in the world of sports.

All of the shows listed above will premiere when Quibi launches on April 6, so start picking out which ones you want to watch first.